FINE time for President Aquino to put our territorial disputes with China—which started fifty years ago and whose resolution will take probably a hundred years—at the forefront of our diplomatic relations with the newest economic superpower.

Great timing for our country to be the noisiest among five claimants, condemning China as the region’s bully, and practically calling the global bully—the US—to go to our neighborhood and beat up that troublemaker. The four other protagonist against China’s claims (Malaysia, Vietnam, Taiwan and Brunei)—as well as Cambodia and Myanmar must be cheering us on to antagonize China—while laughing at us behind our backs.

The reason for our neighbors’ delight: Because of our less-than-friendly relations with China, we have been left out of the economic superpower’s surge in its investments abroad – getting only miniscule amounts compared to those our neighbors in Southeast Asia are getting.

The surge in China’s foreign direct investments abroad—even as it has been sucking up a lot of industrialized countries’ capital—actually started in 2002, when its leadership announced a “Go Global” injunction to its industries, partly to make use of its huge international reserves, partly to secure natural resources, and partly as its means to extend its soft-power”.

Incentives were given to companies investing abroad, such as preferential bank loans and corporate income-tax cuts. In 2007 China even set up the state-owned China Investment Co. to manage a $200 billion fund drawn from its foreign exchange reserves. Because of the central government’s existing regulations though, foreign investments abroad are almost completely directed by Beijing. 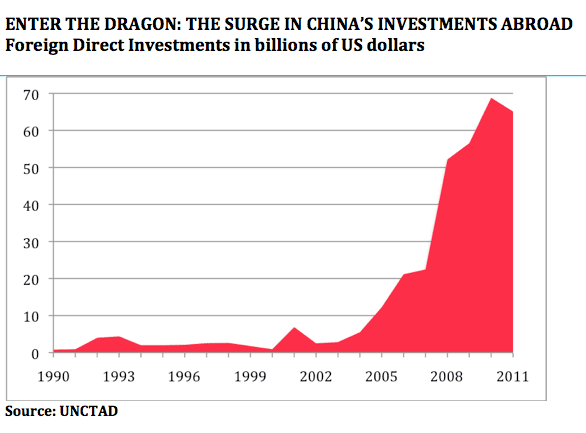 While the bulk of China’s foreign investments went to industrialized countries, capital inflow to ASEAN countries grew from just a few hundred millions from early 2000 to $1.9 billion in 2009, and $6 billion in 2011, to an estimated $7.2 billion last year.

The Philippines was almost left out of China’s surge in investments overseas, with the inflow steeply declining from $408 million in 2009, to $215 million in 2010, and in 2011 just 98.6 million. These figures even include investment from Hong Kong firms, which are considered to be little influenced by Beijing. 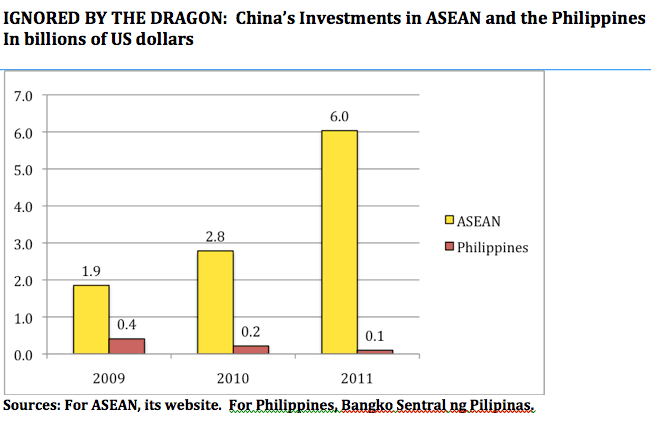 The planned investments of ZTE Corp. in the country’s broadband infrastructure in 2005 was part of this “Go Global” directive, and in that company’s case, directed by President Hu Jintao himself, whom former President Gloria Arroyo and then House Speaker Jose Venecia had developed friendship with. The opposition though managed to concoct an elaborate fabrication that the deal with ZTE—in size as big as Microsoft and a listed firm not only in China but in NASDAQ stock market—was tainted with corruption. Other than the territorial spat with China, it was the ZTE which first discouraged Chinese investments into the country.

In contrast, China’s investments have been injecting new energy to such a Tiger Cub in the region as Malaysia. Last week, the Malaysian Trade and Industry Minister boasted that China will be investing $325 million in the country’s biggest industrial park project. China’s direct investment into Malaysia in 2011 has been reported to amount to $4 billion.

China’s investments in Asean have been particularly spectacular for Cambodia, not only a war-damaged country but ravaged by its civil war. Chinese investments into that country totaled $8.2 billion from 2006 to August 2012. That’s an amount bigger than the $7.5 billion in investments from all countries the Philippines got in the past five years.

A Wall Street article described how Chinese investments have been changing Cambodia:

“Cambodia, like neighboring Myanmar and Laos, has been a major beneficiary of Beijing’s push in recent years to cultivate ties with developing countries in Asia, Africa and Latin America. From 2006 to August 2012, Chinese companies invested more than $8.2 billion in Cambodia, besting second-placed South Korea’s $3.8 billion and the $924 million from American companies, according to the Cambodian Investment Board. Since 1992, Beijing has offered Cambodia $2.1 billion in aid and loans to fund agricultural development and the construction of more than 2,000 kilometers of roads and bridges, Chinese and Cambodian officials say.

China’s investments have changed Cambodia’s landscape. In Kampong Svay, about 125 kilometers north of Phnom Penh, a Chinese construction facility lays abandoned off a pristine asphalt road, part of a 128-kilometer connection between central and northern Cambodia that has shortened journey times and increased travel.”

Cambodian Prime Minister Hun Sen is laughing to the bank after our Foreign Affairs Secretary Alberto del Rosario fell just short of calling him a stooge of China, when as chair of a ASEAN meeting last September, his country blocked the Philippines’ effort to get a consensus that the Spratley claims be settled multilaterally. The Washington based Center for Strategic and International Studies reported on the consequences of that move:

“Chinese Prime Minister Wen Jiabao pledged to give Cambodia $500 million in loans for infrastructure projects following a September 12 visit to China by Cambodian Prime Minister Hun Sen. China also approved a $2 billion industrial park project that would produce 3 million tons of steel per year and employ up to 10,000 Cambodians. Chinese investment in Cambodia totaled $1.9 billion in 2011, more than double the investment by all ASEAN countries combined and 10 times that by the United States. Cambodian officials rejected speculation that the aid was a Chinese thank you for Cambodia’s support for China on the South China Sea, parts of which are disputed between China and four of Cambodia’s Southeast Asian neighbors.”

This won’t be the first time that the Philippines will miss out on a surge of cross-border capital flows from an emerging economic power. Forced to devalue its yen in the mid 1980s, Japan had what it called a “great hallowing”: its industries moved abroad to take advantage of the yen’s strength. It was Japan’s huge capital inflows that to their countries that was the biggest factor for Thailand’s and Malaysia’s growth to become the region’s Tiger Cubs.

Japanese capital left out the Philippines in that period, outraged by the kidnapping of Mitsui executive Naboyuki Wakaoji in November 1986 by the New People’s Army. He was released only four months later after paying a huge ransom. The suspicion in Japan was that the government had not clamped down on the NPA as it was undertaking peace talks with it. From then, Japanese companies couldn’t get its executives to go the Philippines. They instead went to Thailand and Malaysia. That actually explains much of why we haven’t grown as rich as those two countries.

The country’s image as safe investment site was further damaged by the coup attempts against the government, led by now Senator Gregorio Honasan, prodded apparently by the perceived weakness of the administration then and its closeness to the Communist Party.

The president then was Corazon Aquino.

“We cannot put a price on our sovereignty,” Foreign Affairs Del Rosario delights in dramatically saying. He cannot understand that it is not our sovereignty that is at issue, but rather the questionable manner—reckless and senseless as it has been done by this administration—that we assert our territory. Just ask the other claimants in that that West Philippine-South China Sea dispute.

Why EDSA changed little of the country (Second of Two parts)

The people have their reasons

If Aquino couldn’t trust Roxas, why should we?