The Paocc was allocated P324 million in confidential/intelligence funds in 2011, P566 million in 2012 and P588 million for this year. The 2011 budget described this allocation as for “Presidential Anti-Organized Crime Commission Proper, including P300 million for Confidential and Intelligence expenses to be released upon approval of the President.”

Obviously to downplay the jump in Paocc’s funds the succeeding year, the 2012 Appropriations Act described the funds allotted for it as for “National Security Monitoring, including requirements for the Presidential Anti-Organized Crime and Transnational Crime Campaign, as well as P500 million for confidential and intelligence funds to be released upon approval of the President.”

The Commission on Audit (COA) report, however, showed that even in 2011 when it was allocated only P324 million, P550 million were disbursed by the Paocc in 2011 as “Advances to Officers and Employees.” That is by far its biggest expenditure, with its other personnel and operating expenses totaling only P1.4 million. This huge amount represents the confidential/intelligence funds released without any detailed liquidation requirements except for the executive secretary’s certification that the President authorized the funds. 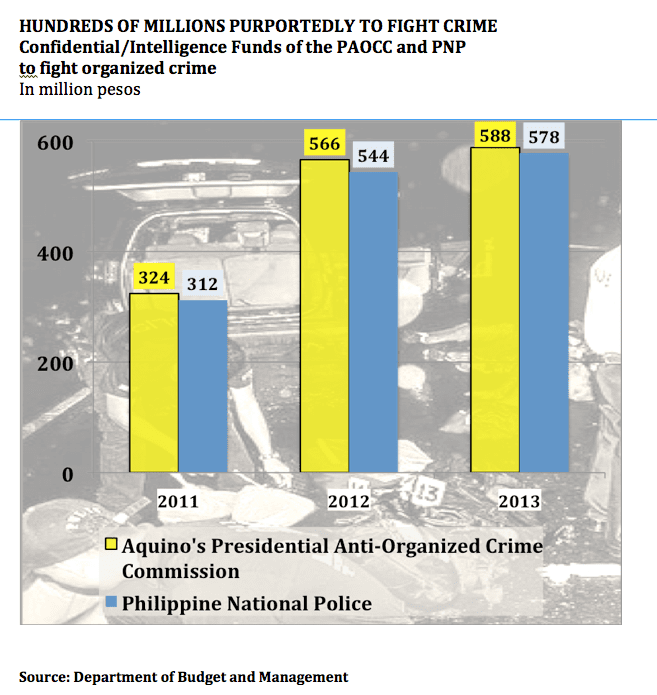 In comparison to the total P890.1 million the Paocc disbursed in 2011 and 2012, the PNP’s intelligence funds were slightly smaller, at P866.5 million. However, only P97.2 million of these can be released by the PNP chief, with the bulk, P769.3 million requiring the President or the executive secretary’s approval.

The confidential/intelligence funds could be a source of plunder-level corruption, as there moneys are disbursed solely on the President’s, or PNP chief’s say-so, that it is utilized for confidential intelligence-gathering, or actual operations against organized crime. The COA cannot demand details of these disbursements on grounds that the lives of intelligence informers or police operatives would be put at risk if details on these are disclosed to outside parties.

However, in many other countries, the check on corruption and wastage on such funds is undertaken through a bi-partisan Congressional Oversight Committee, which has strict confidentiality requirement and meets only in executive sessions. Such check was deemed crucial since unaudited confidential/intelligence funds could be a source of massive leakage of funds that Congress intended for the security of its citizens. It could also be a source of taxpayers’ money used against the opposition and even to fund an electoral contest.

7,080 ‘EJKs’ and so much outrage; only three cases with details?

Poe is such a huge argument against democracy