Like many of my generation and social stratum, I hailed the EDSA Revolution, and as late as 2009, I wrote a front-page article in the Philippine Daily Inquirer’s 2009 special edition that had the lead: “Corazon Aquino may well be

the first Filipino to have a global impact: She inspired the nonviolent democracy movements that swept the globe in the past two decades.”

I stand by that assertion. Although, there are really mundane factors for that, among them, the role of the PR-political consultancy group Sawyer Miller (Cory’s speech writers and image maker) and its cashing in on its Manila experience and template to advice, for hefty fees of course, Latin American and Eastern European anti-dictator movements. (Cf. James Harding, Alpha Dogs: The Americans Who Turned Political Spin into a Global Business. Farrar, Straus and Giroux, 2008).

The unique features and dynamics of Western journalism at that time also explain much of the EDSA Revolution’s worldwide impact.

Together with the anti-Soviet Solidarity movement in Poland, EDSA was the beginning of the new media that would transform the world, pioneered by CNN: real-time televised coverage—revolutions at the other side of the world brought to Westerner’s living rooms as they happen.

EDSA was an episode, in which the Western press first demonstrated its powerful role in changing the world: What some would see as assisting democratization movements but which others would condemn as interference in sovereign countries. That template would be used in successful and unsuccessful anti- authoritarian revolts in this century, even as recently in the so-called Arab Spring revolts.

After the Vietnam War and Nixon’s fall, droves of US journalists lusting for the Pulitzer prizes were desperately looking for romantic stories of good and evil, and the story of a widowed housewife challenging a dictator was a story editors loved, front-page material for many, many newspapers. Time, Newsweek and Far Eastern Economic Review, and many more would make Cory and the People Power revolution their cover stories. Thus, the morality tale of good-conquering evil was a storyline disseminated around the world, inspiring democratization movements, some successful some not.

However, nearly three decades after EDSA now, we have to stop patting ourselves in the back for our role in world democratization.

We have to demythologize it, as its legacies—or curses—haunt us to this day. EDSA for many reasons is responsible for why we still are where we are, why the county’s still poor, left behind in Asia.

The most important question is this: Has EDSA really helped our country at all, has it mattered in uplifting the lives of millions of impoverished Filipinos?

The unequivocal answer is no. Use a simple indicator as the country’s gross domestic product (GDP) per capita (at current US dollars), which roughly measures the wealth it produces per person 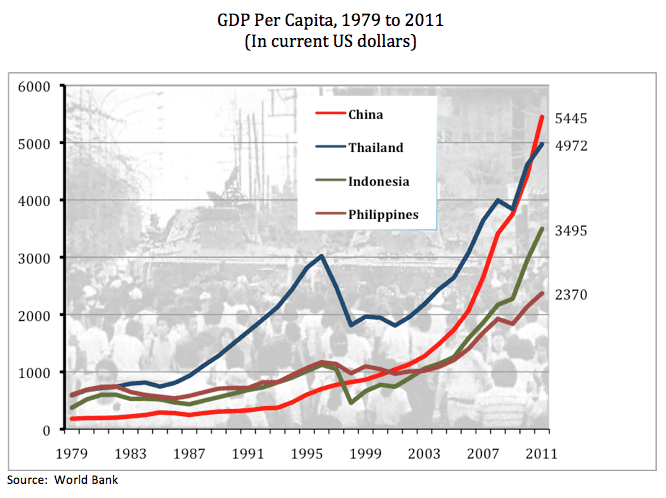 Our GDP per capita hasn’t grown as fast as our Asian neighbors after 1986, as shown in the chart, which is simplified to include figures for just three other countries.

By 2011, ours was the lowest at $2,370. China’s $5,445 was more that twice that of ours, so was Thailand’s $4,972. Indonesia’s $3,494 GDP per capita was 32 percent bigger than the Philippines. EDSA was powerless, or useless in enriching our country and pulling millions of Filipinos out of poverty.

The countries which overtook is in terms of GDP per capita didn’t have such a glorious episode as the EDSA Revolution.

Indonesia’s Suharto in fact ruled as a strongman for 30 years—10 years more than Marcos—to be toppled only in the wake of the 1997 to 1998 Asian financial crisis that hit it severely. China had the exact opposite of our EDSA Revolution: its Tiananmen Square Democracy Movement, which was ruthlessly crushed by the state. Thailand’s history would be marked by one “people power” (the urban “Yellows”) versus another “people power” (the rural “Reds”). Yet it would fast bounce back from the disastrous 1997 to 1998 Asian financial crisis.

Average annual growth rate of the GDP per capita (in current US dollars) during Cory’s watch was 7.4 percent, which was lower than the 13.6 percent in the heyday of martial law from 1973 to 1982. (The period 1983-1986 was extraordinary, since the country went through its political crisis at the same time that the global debt crisis broke out.)

That of her anointed successor Fidel Ramos was at a low at 3.5 percent but that was because the economy was severely hit by the 1997 to 1998 Asian financial crisis. That during Joseph Estrada was 4 percent. The highest in the post-EDSA period was during Gloria Macapagal-Arroyo’s administration, at 8.1 percent, despite the global financial crisis that severely hit the country in 2008 to 2009.

However, peruse the lines in the chart at the beginning of this column: What’s obvious is that our country, as it were, seems to be simply gliding, with hardly any of the upward bursts characteristic in the lines representing our neighbors GDP per capita.

This reflects the reality that nothing much, nothing structural, had occurred as a result of the EDSA Revolution. It didn’t remove the baggages weighing heavily on our economic and political structures. EDSA was essentially a restoration of pre-martial law Philippine society.