PERHAPS it was sheer sloppiness on Budget Secretary Florencio Abad’s part in managing taxpayers’ money. Or perhaps it was his mindset that the Disbursement Acceleration Program (DAP) was his creation, and that he could get the simple-minded President Aquino to approve and fund any project that he wanted.

But 13 major projects funded out of the DAP scheme involving P29 billion in state funds, or 20 percent of the P144 billion amount released under that mechanism, had not been approved by Aquino. At the very least, there is no document showing that he approved these 13 projects.

That means a single Cabinet official, Abad, wielded the absolute power to decide where government funds were spent. And in case any of you forgot, the DAP funds were not approved by Congress.

The third phase of the DAP was purportedly authorized by Aquino through his approval of DAP-funded projects that Abad proposed in his June 25, 2012 “Memorandum for the President.”

However, while Aquino “checked” the “APPROVED” box in the memorandum, he had a very legible marginal note that said:

It was item 16.3 that read: “The proposed additional projects identified for funding.” These listed 13 projects, which Aquino in his marginal note indicated he was not approving at that time but would be “subject to further discussions.“

Despite his non-approval, 11 of these projects were implemented, as Abad reported in the “Detailed List of DAP Projects” which he submitted to a Senate committee. Among these was the P2 billion allocation for road projects in Aquino’s home province, Tarlac. Did Aquino, at the back of his mind, think that it would seem less self-serving if he didn’t sign his approval for this?

Abad simply assumed they were approved, or more likely at that time he didn’t care if the President had signed the approvals. Abad had not submitted to the Supreme Court any document showing that Aquino approved these projects.

Other than these big 11 projects, there was another DAP project that bore no indication of a go-ahead from Aquino but which Abad financed, anyway.

In his September 4, 2012 memo, in which Abad asked for presidential approval of other DAP projects, Aquino wrote a marginal note beside his “APPROVED” check mark: “Note: Items with asterisk will have to be discussed prior to approval if warranted.”

In the list of projects Abad proposed, Aquino marked four projects with such asterisks. These have not been implemented except for one, the P207 million “Kilometer Zero – National Monument Hardscape and Softscape Redevelopment Project.”

The following 12 projects were, therefore, financed by government money ostensibly through the DAP scheme, but for which no documentation showed that they were approved by Aquino: 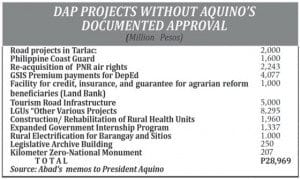 That Abad could be so sloppy that he forgot to get Aquino’s written authorization for the implementation of these 12 projects is another indication of how Abad’s gang thought they were so powerful that they could dispense with existing laws and regulations, and use government money any way they wanted to.

It is this kind of hubris that has become their undoing.

As I explained in detail in my column Friday, the real reason why President Aquino had suddenly claimed his “bosses” wanted him for a second term was because continuing in power was seen as the only way he could escape criminal charges.

Hundreds of cases
Following the Supreme Court’s ruling that the DAP is unconstitutional, he faces hundreds of cases of technical malversation of government funds that can be filed against him by any lawyer or private citizen.

This is also the reason why he has been belligerent toward the Supreme Court, claiming it has intruded into the Executive Branch of government.

It is really an open and shut case. Take for example one project Abad claimed was financed through the DAP. The budget department ordered the release of P450 million for the National Irrigation Administration for the Jalaur River Multi-Purpose Dam, Senate President Franklin Drilon’s pet project.

The dam project is so controversial it’s been called a ‘killer dam” since it will displace 17,000 indigenous Tumanduk people and inundate their ancestral domain. Aquino didn’t dare propose it to be included in the 2011 budget bill, enacted as Republic Act 1047.

But just the same, the budget department issued Special Allotment Release Order (SARO) FP-11-02250 ordering the release of the P450 million for the project.

The authority for the release? The SARO says R.A. 1047, section “A.1” of the law’s section on “Budgetary Support for Government Corporations.”

But go to that section of R.A.1047, and there is no such item authorizing P450 million for the NIA. There isn’t even a centavo that year authorized for any NIA project.

This and 1,996 other SAROs are prima facie cases for technical malversation – or even falsification of public documents – both for Aquino and Abad.

Instead of a situation in which their guilt has to be proven, these technical malversation cases would require Aquino and Abad to prove their innocence that these were allowed under the administrative code. That is, these projects were financed from “savings.”

But the Supreme Court precisely has ruled that the savings the Aquino government claimed were the source of the DAP allocations aren’t savings, but mostly hijacked from other allocations authorized by the budget laws.

So Aquino and Abad’s last resort: “But we did it in good faith.”

However, the Supreme Court decision also closed that venue for them to escape criminal liability, even pointing out that Abad, with his nine years in Congress couldn’t have been ignorant of budget concepts and rules. It even pointed out in its decision that “proper tribunals” must determine “their criminal, civil, administrative and other liabilities.”

No wonder Aquino has gone ballistic since the Court issued its ruling, even in effect threatening to force the country to give him a second term.

Probably in 2011, Aquino and Abad thought the DAP was their stroke of genius to both raise the needed bribe money to get Congress to remove Chief Justice Renato Corona and to amass their war chest for the 2013 elections.

It has turned out that the DAP is a blunder for Aquino of such monumental proportions that one can only explain it as due to a catastrophic mix of hubris and stupidity at its worst levels, never before displayed by any president.

Aquino the worst president ever: He damaged our institutions