That phrase, of course, is the truncated version of that English idiomatic expression, “the tail wagging the dog,” meaning the less important or subsidiary factor, person, or thing dominating a situation—an absurd reversal of roles.

The term assumed a slightly different and more popular meaning through the 1997 movie with that title in which a US president’s spin doctor (Robert de Niro) fabricates a non-existent war in some obscure European nation, with the help of a movie director (Dustin Hoffman) who filmed actors and actresses in tear-jerking war scenes that stoked American patriotism.

It was intended to shift the public’s attention away from accusations that the President fondled an underaged girl visiting the Oval Office, just a few weeks before Election Day, which would have made him lose his re-election bid. Hence, to “wag-the-dog” has come to mean, an operation to distract public attention away from an issue adverse to one’s client.

Aquino’s sudden pronouncements that there is a clamor for him to have a second term, his puppet House Speaker Belmonte calling for a constitutional convention to allow that, his political attack dogs urging a clipping of the Supreme Court’s powers – these are all obviously wag-the-dog strategies.

They are intended not only to divert public attention from his big crime (the misuse of state funds for political purposes, via the Disbursement Acceleration Program), but also from the nation’s deep disappointment—more precisely anger—over his failings as president of the country.

However, what comes close to the wag-the-dog plot of that 1997 movie – because it similarly involves a president stoking the fires of patriotism against a “foreign enemy” for his own selfish agenda—is his recent claims of renewed Chinese intrusion into Philippine territory, specifically into the Recto Bank, or Reed Bank. Naturally, his favorite newspaper used as banner headline his wag-the-dog move: “New China incursion hit.” 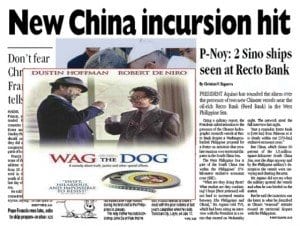 I actually expected that wag-the-dog move as Aquino has been pulling out his anti-China card every time he runs into trouble. It’s his most effective diversionary tactic ever since his “blame-GMA” line lost steam among the increasingly skeptical Filipinos. He certainly has given new life and deeper meaning to Samuel Johnson’s quip: “Patriotism is the last refuge of the scoundrel.”

We certainly have very legitimate claims for our territory in the West Philippine Sea, but Aquino, ever since he assumed power, has been tackling these so incompetently and clumsily that he has only given the Chinese excuses to accelerate its occupation of those areas.

His latest wag-the-dog move was made in his recent exclusive interview with TV-5—a firm controlled by the Indonesian Anthoni Salim’s top executive Manuel V. Pangilinan (MVP, as he prefers his moniker). Aquino in that interview suddenly volunteered information from the military that “Chinese hydrographic research vessels” were at Recto Bank, which is within the disputed territory and 80 nautical miles northwest of Palawan.

Aquino asked: “What are they doing there? What studies are they conducting? I hope [their presence] will not lead to increased tension between [the Philippines and China]?”

Aquino very well knew the answers to his questions, as the Chinese had consistently done a tit-for-tat for every blundering Philippine foreign policy move in the area.

As a backgrounder, which actually should be a big revelation to us, is the fact that despite our territorial disputes with China in the West Philippine or South China Sea, a major Philippine conglomerate has made a huge stake in the area.

This is the Salim-owned and Pangilinan-run First Pacific, which controls Philex Petroleum.

Philex Petroleum, in turn, owns 65 percent of the UK-registered Forum Energy, which, since 2010, was given by government exploration and operation rights in that area in Reed Bank officially designated as Service Contract 72 (SC 72). The company is betting that it contains as much as 16.6 trillion cubic feet of gas and 416 million barrels of oil, although some analysts dispute this.

China, however, way back in 2010 had warned Forum Energy and the Philippine government that they couldn’t undertake any activity in the area as it is under Chinese sovereignty. The Chinese government also pointed out that it had already granted its China National Offshore Oil Corp. (CNOOC) the exploration rights to that area.

China turned down in 2012 Pangilinan’s proposal for an agreement that would, in effect, allow Forum Energy and CNOOC to jointly explore the SC 72. Therefore, Philex Petroleum’s operations for SC 72, which would have been one of its biggest investments, had been dead in the water for two years now.

Last May 20, at Philex Petroleum’s annual stockholders meeting, its chairman, Pangilinan, made an unexpected announcement: “In the board meeting today, the board decided to start preparing for a possible drilling program of two wells, which was the original plan two years ago. We were told that takes about 18 months to prepare for that, so the earliest we could do the actual drilling is sometime in the first quarter of 2016.”

“So we would seek to do that, subject to approvals of the government and, of course, I don’t have any idea how China would react to such drilling program,” he added.

While Pangilinan’s announcement wasn’t reported as big news, it was a surprise to those following the Spratly dispute.

How could Forum Energy drill wells in the area when the Chinese categorically told it that it couldn’t do so as this would violate Chinese sovereignty? Did it and the Philippine government decide to defy the Chinese?

Or did Pangilinan achieve a breakthrough in getting China’s CNOOC to an agreement to jointly explore SC 72?

But Pangilinan himself said in that same event: “There have been a number of meetings with CNOOC in the early part of last year and nothing has happened since then.”

Analysts concluded, though, that Pangilinan was simply trying to prettify Philex Petroleum’s image, especially since it was a listed firm, and was sending a signal to the market that its expensive SC 72 project, which is reflected in the firm’s stock price valuations, was not dead in the water.

This analysis had seemed accurate since Forum Energy’s permit to undertake exploration activities in the area was ending August 2014.

But then on July 9, the Department of Energy extended its permit for Forum Energy to drill two appraisal wells, with the deadline for completion extended to August 15, 2016.

Naturally, the next day Chinese Foreign Ministry spokesman Hong Lei in a press conference in Beijing declared: “Without permission from China, oil and gas exploration by any foreign companies in waters under China’s jurisdiction is illegal and invalid.”

You judge for yourself.

Did the government think that China would not back up its words by sending immediately its ships to Reed Bank, after Pangilinan announced his company would start drilling two wells there, in effect, saying that he doesn’t care “how China would react to such drilling program?”

Or was Pangilinan’s announcements of starting drilling operations at the Reed Bank and the energy department’s move to extend its permit merely part of Aquino’s wag-the-dog move to provoke a “new Chinese intrusion,” intended to divert attention from the political disaster that was the Supreme Court’s July 1 ruling against the DAP and the rising resentment of the nation against him.

However, this latest of Aquino’s wag-the-dog moves will cost the Philippines dearly.

With his government in effect announcing to the world that it has authorized Forum Energy to start its drilling projects at Reed Bank so it could meet the 2016 deadline, China would most likely order its CNOOC to do its own drilling, claiming that it has no option since the Philippines moved first.

And guess which navy has the might at this time to defend which company’s vessels in the disputed area?

Aquino just gave China an excuse to occupy Reed Bank with CNOOC ships and, of course, with naval escorts.

There is one mystery, though. Pangilinan is a very intelligent man, one of the few Filipino business executives who have, because of First Pacific’s international engagements, a grasp of geopolitics.

Why would he make such an announcement that his firm would start drilling operations at Reed Bank, which he knew full well would ruffle China’s feathers and spark fresh tensions at the Spratly islands?

Carpio: The newest clown in town