It is astonishing both how the Senate continues its debasement as a political weapon used by President Benigno S. Aquino 3rd and how its members are oblivious of their degraded status.

Can’t they realize that the Senate, once the pantheon of the nation’s most respected and independent political leaders, has now become a house of political harlots?

Even Pulse Asia, founded by Aquino’s cousins, couldn’t conceal the trend shown by its opinion polls, that the Senate’s trust ratings have plunged from 41 percent in December to 31 percent last June. Can’t they see that people’s views of them, because of their pagka-tuta—to use that vivid Pilipino political term – are following the fall of their lordship Aquino’s ratings, from 52 percent to 29 in the same period?

The Senate’s latest service to its Boss was undertaken last week, a demolition job against Vice President Jejomar Binay. It is obviously a desperate attempt to pull down Binay’s ratings since there are just 20 months left to the May 2016 elections. Binay’s lead of 41 percent preference is miles away from Aquino’s sidekick Mar Roxas’ basement level of 6 percent. Even if they throw support behind Mar in the form of billions of pesos they have amassed through the Disbursement Acceleration Program (DAP), he still won’t have a chance.

It has become a matter of survival, literally personal survival for Aquino. Out of power, he stands to face hundreds of technical malversation cases because of his illegal DAP, and the penalty won’t be “technical” but jail terms and financial penalties. 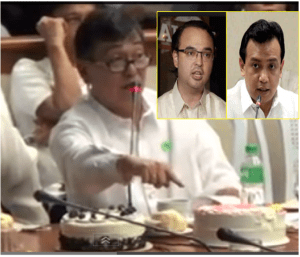 Debasement
The Senate’s debasement would be so obvious to you if you watched that Senate hearing, ostensibly on the overpricing of a Makati City building, but clearly only a scripted pull down of the frontrunner in the presidential race. (This is still posted at http://www.philstar.com/headlines/2014/08/20/1359349/live-senate-probes-makatis-p1.56-b-parking-building.)

The following are vignettes from that Senate hearing on the alleged overpricing of the Makati city office building. Claiming that it was just a parking building is another Hitler type of lie that is the favorite strategy of this administration: repeat a big lie again, and again.

■ The accuser Renato Bondal, who lost against the vice-president’s son Mayor Jejomar Erwin (Jun) Binay, Jr. in the 2013 elections despite enormous financial backing by senator Alan Cayetano’s camp, alleged that the Makati building, which cost P2.7 billion, was overpriced. His proof? He claims, the Kuok’s Shang Tower building cost P2.1 billion while the Ayalas’ The Residences at Greenbelt cost only P2.6 billion. His source? Wikipedia. Check out that website’s sources for those figures. None. At those prices, a source said, the Kuoks owning Shang and the Ayalas owning the residential complex —would have made tens of billions of pesos, given the price they sold their condominiums there. His estimate for their real construction costs: P5 billion, at 2007 prices for the Shang, and P8 billion for the three Residences towers.

■ Bondal claims the construction cost should be just P7,000 per square meter. At that price I can have a 240-sqm mansion at P1.7 milllion. I beg Bondal and Trillanes to ask their contractors to build a home for me at that price in a Cavite town. The best quote I could get, was P25,000 per sqm, and that’s at cost, and labor there is a lot cheaper than Makati.

■ After claiming that the Makati city building has only one elevator, he says, as if scripted, that Binay has a better elevator in his residence. Obviously on cue, Senator Trillanes nearly jumps to ask the mayor if this is true, delighted at the chance to taint Binay’s son as living a luxurious lifestyle.

■ In a theatrical but really comedic move, Bondal brings to the Senate hearing five cakes—yep, the actual cakes— which, he says, he just bought at the cake-shop at P300 to P500 each. Then out of the blue, he claims that similar cakes were bought by the Makati government at P1,000 as gifts to the city’s senior citizens on their birthday. The city administrator the next day would submit purchase orders showing the cakes were bought at P306.75. Even Senator Koko Pimentel was irritated and asked what those cakes had to do with the topic of the hearings, which at the time was the cost of Makati city building. “I know the investigation was titled ‘Makati building overprice and other anomalies,’ but this matter of cakes is ridiculous.” The video didn’t show though if the cakes were later served to the senators for dessert.

Not even finessed
The hearing was an obvious but very poor excuse to taint in a televised event the integrity not of the current mayor Binay, but Vice-President Binay, currently the shoo-in for the presidency in 2016.

They didn’t even bother to finesse their attempt since the very aggressive accusers were two ambitious senators, Antonio Trillanes and Alan Peter Cayetano, both of whom have been begging Aquino to anoint them as vice-presidential and presidential candidates for 2016.

Trillanes, I’m afraid, was losing his marbles when he said: “This is bigger than the pork barrel scam.” What? And he based his conclusion that Binay pocketed P2 billion on the allegation made by that loser, Bondal, who cited Wikipedia entries, which had not mentioned its source for such info?

Didn’t he know that the pork barrel allegations were based not only on nearly a dozen whistle-blowers’ testimonies, but also from a Commission on Audit’s special audit that took three years to complete?

I wonder if Trillanes even knows how to count: P2 billion alleged overprice compared with the P10 billion —at the very least—siphoned off by the pork-loving lawmakers?

If you watched the accuser Bondal in the hearing, here’s the immediate conclusion you’d get: This guy is an operator.

He even came up with cheap sound-bites that he hoped would be repeated on the front-pages by calling the building a “double-bukol” and that Makati was the “chop-chop” capital of the world, since several contractors built the structure.

Even Senate President Franklin Drilon, Aquino’s lieutenant in the Senate, was shocked by Bondal’s loaded terms and asked him not to use these in the hearing, or “the people would think this hearing is just for politics.”

DAP hearing so different
The Disbursement Acceleration Program involved P147 billion of taxpayers’ money, hijacked by President Aquino and used for projects at his whim. It virtually threw into the dustbin the Congress’ constitutional authority to determine how state funds were spent.

Yet in the Senate hearing on the DAP, Trillanes acted as if he were part of Budget Secretary Florencio Abad’s staff and that the only thing wrong he found was that it wasn’t properly communicated to the nation. His main point: “You have to improve your communication program to explain this to the people.”

In contrast, at the Senate hearing on the P2.7 billion cost of the Makati building, Trillanes practically coached the accuser, repeated his accusations to make sure television audiences heard it, and reiterated the accusers’ loaded terms like “Binay building.”

He badgered Commission on Audit chair Grace Pulido-Tan to state that the COA—i.e., the three-man commission —had not approved the report by the auditor, whom it had assigned in Makati City, that found nothing wrong with the building’s cost.

But Tan, who was at the hearing and probably still in disbelief that Aquino didn’t appoint her to the Supreme Court, didn’t bother to point out that except for some special audits, the audits done by its units covering 3,000 government entities are not approved by the COA itself, but presumed to be accurate unless some higher supervisory unit asks it to review these on suspicion that they are wrong. The COA’s explosive audit of pork barrel use, for instance, was made by its special audit team, and transmitted—without the three-man commission approving it—by the chair to the budget secretary.

Who should investigate?
The Makati building may have been overpriced, or not. Who or what agency has the competence and the authority to determine the facts?

Constitutionally, COA is the supreme authority that decides on whether government funds were misused or not. But for the first time in our history, this administration had defied such COA authority in the case of the charges filed against former president Gloria Arroyo for alleged malversation of the intelligence funds of the Philippine Charity Sweepstakes office. It even included the former COA head, Rey Villar, under whose term the PCSO’s books were cleared, in the charges.

Bondal had followed this precedent and filed a graft case against the Binays in the Ombudsman.

If this were brought to the Sandiganbayan, the accuser and the defendants would present their own witnesses to prove whether the price was padded or not. And it would be the Sandiganbayan that, in effect, would rule whether it was overpriced or not, based on the testimonies.

If Aquino, through Trillanes and Cayetano, would want to squeeze every ounce of propaganda out of the allegation in order to pull down Binay’s ratings, they have all the right to do so. Aquino could also pressure the Ombudsman to file the case at the Sandiganbayan.

Bondal and Trillanes could call for weekly press conferences, bring as many cakes as they want, present slide shows on the cost of Shang Towers and The Residences according to Wikipedia, and even run full-page ads in the newspapers on the allegation.

But to use the precious time of the Senate for such a hearing is just downright cheap. The country has so many economic problems and yet, the Senate has all the time to squander taxpayers’ money and undertake yet another political tear-down of its boss’ perceived enemies.

Trillanes and Cayetano are flawed creatures of our damaged political system—so young, so ambitious for higher posts, so cunning. But the only distinction they have earned after several years in the Senate is as its character-demolition experts.

If they’re supposed to be the next generation of our political leaders, we’re doomed, really doomed.