The gall of President Aquino and his cohorts to think that they can fool the nation so easily.

To create a false picture that Mr. Aquino still has civil society support, it set up a pseudo-association, the “Koalisyon ng Mamamayan Para sa Reporma” (Kompre), launched on the day of the demonstration of the anti-pork barrel movement, which is an authentic groundswell of protest against this administration.

It wasn’t only convenor Karina Constantino-David, as I reported Wednesday, who is a highly paid official of this administration, making about P2.6 million a year as board member of the Government Service Insurance System (GSIS).

The second of Kompre’s two convenors, Alberto Lim, has been a board member of a government firm, the Development Bank of the Philippines (DBP), since late 2011 right after he stepped down as secretary of the Department of Tourism in August 2011.

While Lim claims he resigned “to spend more time” with his family, insiders said he was asked to resign because of his pig-headedness when he insisted on launching a new tourism international tourism logo with the slogan “Kay Ganda ng Pilipinas,” which turned out to be a copy of Poland’s marketing line. 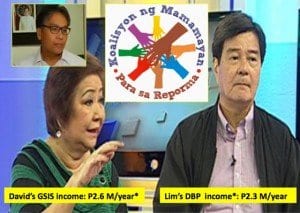 But Lim should be very grateful to his detractors for helping him get kicked out of the DOT. His job as board director at DBP is so much more lucrative, giving him a generous income averaging P2.3 million annually. Other than his board directorship at DBP, he is also a board member of DBP Leasing and DBP Data (to which he presumably also gets some compensation).

Like David in the case of her GSIS board seat, Lim had not disclosed his board directorship in a government firm in his media interviews, and was identified only as “former tourism secretary.”

Of course they wouldn’t volunteer this information, as it would expose their hypocrisy that they’re in Kompre not for their civic-mindedness, but because they have to pay back their patrons. Most probably, Roxas ordered them to attend and reminded them that they have to earn their keep.

There is one thing in common between David and Lim, other than they’re both earning millions of pesos from taxpayers’ money as board directors in two profitable state firms.

My sources told me that in Aquino’s camp, the two are known to be Interior and Local Government Secretary Mar Roxas’ “people.” David, in fact, is Mar’s cousin through her mother Leticia Roxas. On the other hand, Roxas recommended Lim to his post as tourism secretary.

After Lim’s grand failure at the DOT, Roxas asked Aquino to appoint his “tao” (his lackey) as DBP board member, telling the President that Lim would be doing other “tasks” outside the bank.

I was told that the real convenor of Kompre aren’t David and Lim. It is forever-hopeful presidential aspirant Mar Roxas. Unfortunately for him, he has been unable to get other Aquino forces behind the idea of Kompre, particularly the so-called “Samar faction” led by Executive Secretary Paquito Ochoa.

Because of this, Roxas has started to blame the “Samar faction” for the sparse attendance at the Kompre launching. In fact, Roxas had to bus into the assembly at the Ateneo members of the “Araneta Farmers Agrarian Reform Beneficiaries Association” to provide warm (but ultimately clueless) bodies.

A joke about “Kompre” has already been circulating, that it’s a perfect name for this fake group, as it sounds like the Spanish “compre”, or “I bought,” referring to the mercenaries who lend a human face to the group’s identity. Another is that it should be called “Kompro,” for “Koalition ng mga Mamamayan para kay Roxas. “

A moping President
Ever since the Supreme Court ruled that Aquino’s Disbursement Acceleration Program (DAP) is unconstitutional, rumors have been buzzing in coffee shops and cocktail lounges about the president’s currently delicate mental and emotional state, confirming what many perceive as his shaky psychological foundations.

I have heard the following account from friends who move in totally different circles, which bolsters its veracity.

In a recent Cabinet meeting, Aquino asked why there were few, even those in the hall, wearing his yellow-ribbon symbol when he had asked people to do so in his recent speech.

After an embarrassing silence in the room, Aquino remarked: “Ayaw na yata ng tao sa akin e magre-resign na ako.” (Maybe people don’t want me anymore, so I’ll resign.) Then he stood up and walked out of the room. A Cabinet member — Ochoa or Jose Almendras, the reports vary — in panic followed him out, and after a few minutes they returned to the room as if nothing happened.

This story had actually spread quite a bit as the Cabinet meeting wasn’t an executive session, which means aides of Cabinet secretaries had witnessed it and later told their officemates, friends, and family about the incident. Later on, presidential spokesperson Coloma had to tell the media that the president was only “joking” about asking people to wear a yellow ribbon.

Meanwhile, Aquino was advised to float the idea that he will work for a second term in order to counter this dangerous talk that he was peeved at the people’s lack of support and that he wanted to resign.

Two separate sources also confirm this story of Aquino becoming so depressed with the fall of his approval ratings, as reported by his in-house pollsters, with numbers that are even worse than the publicly released findings of the Social Weather Stations and Pulse Asia. He has reportedly taken to moping and sleeping over at his sister Ballsy’s residence and not doing any work. In fact from August 19 to 24, or six days, except for his visit to his parents’ graves, he had not scheduled any work or meeting.

For the ‘funds’ of it
Many were surprised that the three impeachment complaints were approved as “sufficient in form” by the House of Representatives Committee on Justice, when most of its 55 members were seen as Aquino allies, even total lackeys. There are two explanations, other than a tectonic shift in their support of Aquino, which is unlikely to occur as long as the President has pork-barrel funds to dispose of, and he still does.

First, the committee, especially its chair Rep. Niel Tupas, a protege of Liberal Party president and Senate President Franklin Drilon, intends to show that it is not Aquino’s tool and would not allow technicalities to stand in the way of truth.

When it deliberates on whether the complaints are sufficient in substance, that’s when the impeachment bid would be dismissed. Thus, they would be able portray a false picture that the complaints were given due course, but were baseless.

A second explanation is that members of Congress are desperate for more money, as the 2016 election is just 20 months away. They would want to squeeze as much money from the administration as they can, which can be done only if Aquino is threatened to be impeached. To borrow the jest politicians use in explaining why they run even if they don’t expect to win, this impeachment process will be for the “funds of it.”

This explanation is quite credible since the 2015 budget has nearly the exact amounts of pork barrel as in the past two years. Yet, it was deviously designed by Budget Secretary Florencio Abad in a way that he hopes he can argue that it doesn’t defy the Supreme Court’s ruling that the pork-barrel system is unconstitutional. I will explain this on Monday.

Aquino, Del Rosario and media hid the loss of Panatag to China from the nation

Enforce the US-backed arbitration award, and we lose our Kalayaan Island Group