President Benigno S. Aquino 3rd has defied the Supreme Court’s ruling that the pork barrel system is unconstitutional and has maintained the system in the 2014 budget, as well as in the 2015 proposed appropriations law. 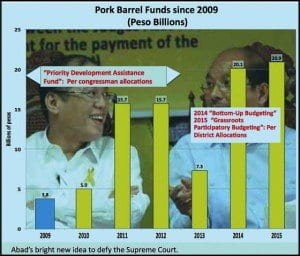 No wonder the House of Representatives continues to be Aquino’s bootlicking servants.

He has merely renamed it, and to go around one aspect of the Court’s ruling, he has itemized most, but not all, of the projects that congressmen want, from which they could easily siphon off taxpayers’ money.

The “old style” mechanism for pork barrel allocated the amounts for projects to be identified by each district representative after the budget law’s enactment.

Funding for the “projects” is pre-determined and settled through backroom and secret consultations between the budget department and the co-opted legislators.
A glimpse of this secretive process was exposed by party-list Rep. Antonio Tinio, who released a tape by Department of Health undersecretary Janette Garin’s statement explaining how congressmen will designate people they want to receive subsidy from the department’s hospitals for their treatments. In another case: Commission on Higher Education chairman Patricia Licuanan told legislators that her agency had reserved P14 million in scholarships for students to be designated by congressmen.

Whether congressmen designate the projects before or after the budget becomes law hardly matters in practice. First, legislators will still be able to extract kickbacks from private contractors undertaking the projects. Second, Aquino and his budget secretary will still be able to realign the funds for each district. And third, they can withhold the release of the funds for some flimsy reason if a congressman goes against Aquino, which would be crucial for an impeachment vote against him.

Now, to hide the pork barrel fund from the Supreme Court and the nation, Aquino gave it an innocuous name in his 2015 budget proposal – the “Grassroots Participatory Budgeting Projects.” For the 2014 budget, he had termed it “Bottom-Up Budgeting,” until one adviser pointed out that it sounds like “bottoms-up” which connotes a celebration – by them and the congressmen over the continuance of their pork barrel.

The Supreme Court last year clearly ordered an end to what it eloquently termed as an “error, which has persisted in the chronicles of our history.” But Aquino, in an act of insolence, even increased the pork barrel money for congressmen from the P15.7 billion in 2011 and 2012, to P20.1 billion in 2014, and P20.9 in 2015.

Nefarious schemes
It has been this administration’s style to hide its nefarious schemes under noble names (the better to fool the yellow believers who are not known for their facility for critical thinking).

For instance, it created the “Disbursement Acceleration Program” (DAP) supposedly for poverty reduction but it was really a hijacking of Congress-approved budget items to raise funds to bribe senators to oust a Chief Justice and to boost the Liberal Party’s election kitty. Another was its proposed “Truth Commission,” which was actually just a kangaroo court to attack the previous administration. Both were shot down by the High Court.

In a bid to go around the Supreme Court ruling, Aquino asked congressmen to give his Administration a list of projects they want in their localities to be placed under “Grassroots Participatory Budgeting,” subtitled the “Priority Poverty Reduction Projects.” It’s just pork, plain and simple.

Aquino and his pork barrel mastermind, Budget Secretary Florencio Abad, are taking the voters for fools who would readily believe that these local projects were recommended by the “masses.”

“Grassroots Participatory Budgeting” (GPB) projects in Aquino’s 2015 budget proposal allocates P75 million to the tiny province of Batanes (official population: 17,000), where Abad’s wife Henedina is congresswoman. This, despite the widespread outrage over the DAP’s fiasco and the public calls for Abad’s resignation, including by allies who fear Abad has ruined forever the reputation of Aquino.

In what reflects his total lack of delicadeza, Abad even increased his wife’s pork barrel to P75 million from the P58 million annual average she got from 2011-2013. The P75 million was distributed equally at P12.5 million to each of Batanes’ six towns.

Rather than having such projects as a “birthing facility,” “goat production,” and another round of “capacity-building” seminars, it might have made more sense for Mrs. Abad to just distribute directly that P75 million to the island’s regular residents, who are said to total only 10,000, as many of Batanes’ people – such as Abad and his family – spend most of their time in Manila.

That would mean that full-time Batanes residents would get P7,500 each, which they could use to start a savings account or a small business. But that would mean no opportunity for anyone there to skim off the island’s pork barrel funds.

With the hundreds of millions of pesos of government funds Abad has channeled to his Lilliputian province, it is even running out of projects to be funded by the 2015 pork barrel fund. For instance, P5.5 million was allocated to its Mahatao town for a “project to be determined (sic).”

Batanes delinquents
Would you believe that this quiet, small island would get pork barrel funds amounting to P2.5 million to build a “bahay pag-asa for CICL?” What’s CICL? Children-in-conflict-with-the-law. For a tiny place with only 10,000 residents to have a lot of juvenile delinquents needing a haven, Batanes must be the country’s Babylon.

The “GPB” is merely Aquino’s new name for his old-style pork barrel through which he secures congressmen’s loyalty and rewards his vassals. Examples:

Corona impeachment prosecutor and justice committee member Rodolfo Farinas’ 1st district of Ilocos Norte, with a population of 190,000, was allocated P137.5 million from Aquino’s GPB, three times the average annual in PDAF funds he got from 2011 to 2013.

Oriental Mindoro’s 2nd district with a population of 364,000 – 21 times Batanes’ 17,000 population —is allocated the same pork barrel amount, P95 million, as what Abad’s fiefdom got. Who is Oriental Mindoro 2nd district congressman? Reynaldo Umali, who claimed in the impeachment trial that he was given a confidential document showing Corona’s bank account by a “small lady blogger.”

On the other hand, the GPB allocation for the 5th District of Iloilo would total P143 million, nearly three times the average P53 million in pork barrel funds it had received from 2011 to 2013 through its congressman, Niel Tupas, the President’s prime triggerman in the taking out of Chief Justice Corona.

Now I know why my old colleague in media Ben Evardone changed jobs, and why he is so much a sycophant for Aquino: Eastern Samar, of which he is the lone representative, will be getting a whopping P272 million under the 2015 budget, five times the P57 million annual average of what he got from 2011-2013.

How did Aquino and Abad determine these amounts for each congressional district? Were these the result of consultations with the masses in each area, the sum of the “poverty alleviation” projects they proposed to be funded?

Certainly not, and it is amazing how Aquino’s right-hand man Mar Roxas would try to fool the nation when he said in the first and last assembly of the fake civil-society group Koalisyon ng mga Mamamayan para sa Reporma, referring to the “GPB”: “Where can you find a government whose budget was arrived at by consulting with the masses?”

Aquino’s new pork barrel is intended to dodge the Supreme Court’s declaration that the budget can’t have “lump-sum” items, with its details to be determined by legislators after the appropriations’ bills enactment. So now they’re listing the projects for each of the cities and towns, and if you think this is a good thing you are missing the point.

Simple solution
It turns out that Abad had a simple solution to what would have been a very tedious work of listing all of the projects. He allocated P12.5 million for each municipality and city. He then asked the congressmen of each locality to submit the list of projects to be funded out of that P12.5 million, although many were unable to do so completely that the GPB as submitted contained many items “to be determined” or the general “various projects.”

It’s the same genre as the pork-barrel projects funded since 2011, one example being the fact that there a thousand projects for “capacity building” and the usual “livelihood projects.”

There were some exceptions to the general rule of P12.5 million per municipality or city allocation. Quezon City, House Speaker Feliciano Belmonte speaker’s bailiwick, got P25 million, double the P12.5 million the other cities in Metro Manila got. There were also a number of towns that were allocated P18.5 million.

Calculate it: the P12.5 million allocated by Aquino’s pork barrel for each of the 132 cities and 1,458 towns would total P19.9 billion, or close to the P20.9 billion, or the official total reported in that Table A of the proposed budget titled, “LGU’s List Priority Poverty Reduction Projects/FY 2015 Grassroots Participatory Budgeting.”

Aquino’s GPB, undoubtedly, is pork barrel using one of its definitions the Supreme Court used in its decision declaring the pork barrel system unconstitutional: “An appropriation of government spending meant for localized projects and secured solely or primarily to bring money to a representative’s district.”

But with each city and municipality given roughly the same P12.5 million allocation for localized projects, isn’t this egalitarian and non-partisan? Far from it.

This is would be clear in the case of Batanes. Ivana and Uyugan, two of Batanes six towns, have 1,000 residents each. But each of the two towns got P12.5 million in GPB funds. Yet, Pasig and Paranaque, each with 600,000 souls, were also allocated the same P12.5 million each. How tuwid-na-daan is that?

The pork-barrel system, from Cory’s to his son’s terms, precisely has been used to ensure, entice, or coerce local political leaders’ support for the incumbent. This is because national funds controlled by the central leadership are allocated for local projects, which the congressmen choose and use to build up their political support, at best, and at worst, to make money out of.

If the representative of a district, though, didn’t “behave,” the regime would simply withhold its release, and cite so many excuses why it couldn’t.

This is a diabolical schemer we have for a President, not to mention his Rasputin Abad. The embodiment of justice in our land – the Supreme Court – struck down his pork barrel system, and the spirit of its decision is that it breeds corruption and the abuse of authority by a president. Yet, Aquino persists in using it, thinking it had found a technical loophole in the decision – but which, as I will explain in my next column, is a false hope.

Aquino’s new-style pork barrel will subvert our democracy. If he gets away with it in 2015, he will repeat it in the election year 2016 and on a bigger scale, and it will be the biggest vote-buying system ever used in our country’s history.

Sick and tired of blah-blah by, and on, Robredo