I continue to be astonished at how deviously ingenious this government can be in its obsession to keep Congress under its thumb.

On November 19, 2013, the Supreme Court ruled that the pork barrel system (officially termed “Priority Development Assistance Fund) was unconstitutional, ordered it stopped immediately, and banned any such future pork barrel schemes. Only P10.2 billion of the P24.8 billion allocated for it under the 2013 budget law could be released.

President Benigno S. Aquino 3rd faced a politically catastrophic situation. While his yellow crowd worshiped him as a messiah, most of the hard-nosed members of Congress—especially those who knew him when he was still their underperforming colleague— hardly respected him as a leader and never thought he should be president.

But they can be counted on to continue supporting Aquino so long as he holds the purse for their pork barrel funds. This is government money that the congressmen could use to build up political support in their bailiwicks, or to skim money off a la Janet Lim Napoles.

Without the pork barrel bribe, Congress wouldn’t give Aquino the time of day. The other mechanism for raising bribe money, the Disbursement Acceleration Program (DAP) had to be closed down after Senator Jinggoy Estrada in September 2013 exposed it for what it was—a mechanism to bribe senators into removing Chief Justice Renato Corona from his post. 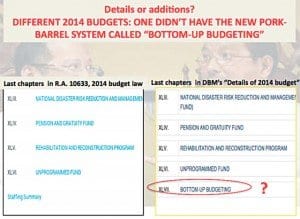 Aquino’s wily Budget Secretary, Florencio Abad, invented a new type of pork barrel and initially called it, “Bottom-Up Budgeting” (BUB) for “Priority Poverty Reduction Projects.” When somebody pointed out that this sounded like ‘bottoms-up,’ which connotes a celebration (something its critics could rightly pounce on as a celebration of the return of pork barrel), Abad renamed it “Grassroots Participatory Budgeting” (GPB).

As I had explained in my column on Monday, the GPB is nothing but the pork barrel system, channeled to the municipalities and city districts represented by each district congressman.

It is not coincidental that the GPB allocation for 2014 of P20 billion purportedly for projects in 1,225 municipalities and cities calculates, excluding those given to cities, to roughly P80 million for each of the 234 district representatives, just a bit bigger than the P70 million allocated to each congressman in past PDAFs. (For 2015, the proposed budget is P21 billion for 1,595 municipalities and cities.)

It was designed that way. There was even a formula of roughly P15 million for each municipality as most congressmen, whether they are the lone representatives or among several, represent five to six municipalities.

How could Abad and his boss President Aquino undertake such a massive program that’s merely pork barrel in new clothes, when the budget laws in 2014 and 2015 didn’t contain such a program? Note that previous appropriations laws had a specific section for the pork barrel system titled “Priority Development Assistance Fund.”

A key to this mystery is Abad’s National Budget Memorandum No. 121 dated March 18, 2014, which explained mechanisms for the GPB projects, and said that these would be funded out via two authorizations.

The first authorization claimed was the Congress Joint Resolution No 1 dated December 26, 2013, which extended to the end of 2014 “unobligated allotments/unreleased appropriations” under the 2013 budget.”

But that joint resolution provided that the validity of such unused funds from the 2013 budget was extended in order to implement “priority programs and projects in calamity-stricken areas,” damaged by the typhoons of the past two years, the earthquake in Bohol and Cebu, the Zamboanga City violence, and especially Supertyphoon Yolanda.

The rationale for the resolution was mainly the fact that the central government had moved too slowly to use the funds under its 2013 Calamity and Quick Response Funds, and thus, would merely be reverted back to the National Treasury.

That means Abad has funded the P20 billion GPB projects partly out of funds Congress intended to be used only for the calamity-hit areas.

The two areas most severely hit by Supertyphoon Yolanda were Central and Eastern Visayas. How much did Abad allocate to these two regions? About P3.8 billion, just 18 percent of the amount Congress authorized to be used for calamity-hit areas.

No wonder not enough funds have gone into areas all but destroyed by Yolanda in Leyte and Samar.

To be sure that he gets the funding for the new pork barrel system, Abad in his memo said the second authorization for the 2014 new-style pork barrel was the “2014 Appropriations under Republic Act 10633 (GAA for FY 2014).”

Read that Republic Act and there could be a crime there which an independent Congress or the Commission on Audit would unravel in the future: A “Bottom-Up Budgeting” is nowhere in the law, and neither is GPB.

RA 10633, both the copies posted on the Official Gazette and on the budget department’s website, had 46 main chapters, the last one on “Unprogrammed Funds.”

But in the budget department’s “Details of the 2014 Budget,” there is an extra 47th chapter added, titled “Bottom-Up Budgeting,” the initial name of the GPB. Click on that item, and there is that document, without any explanation, “FY 2014 Bottom-Up Budgeting List of Priority Poverty Reduction Projects” for 1,225 municipalities and cities costing P20 billion.

Abad simply took the P20 billion allocations to district congressmen in the original PDAF section in the proposed 2014 law, which was deleted when the Court had ruled the pork barrel illegal, and then put it in that “Bottom-Up Budgeting” section of the “Details of the 2014 Budget.” I’m sure though that he will use this same argument he had used to justify the DAP, that it is just a process, not a budgetary item, which the Supreme Court shot down as a fatuous explanation

But there is no Congress resolution that authorized the “Bottom-Up Budgeting” program that would spend P20 billion in taxpayers’ money.

Congress approved the budget a week after the Supreme Court ruled it unconstitutional on November 19, and Aquino signed it into law—minus the PDAF section—on practically the last day of the working year, Dec. 20.

That such a specific allocation is required is shown in the case of the 2015 proposed budget. In it, the budgets for each of the 14 departments and agencies with projects on the local level had a special provision that a specified amount would be used “exclusively for the implementation of GPB Projects identified” in the table annexed to the budget.

This is plainly illegal, another case of technical malversation after the DAP crimes that will hound this President and his budget secretary when they’re out of power.

‘Grace’ is a disease of our politics