The quick death of three cases of impeachment against President Benigno S. Aquino 3rd in just one hearing, purportedly for lack of substance, was not much of a surprise.

Aquino still holds by the neck the House of Representatives because of the still existing pork barrel system, wherein he completely controls massive amounts of money for allocation to selected projects in the districts of loyal congressmen.

At best, these local projects (roads, livelihood, basketball courts, waiting sheds, what-have-you) have the potential of building congressmen’s political patronage. At worst, these politicos can take a percentage of the funds from these projects in connivance with local contractors.

Aquino’s new pork-barrel system, which he masks with the virtuous-sounding title “Grassroots Participatory Budgeting” (GPB), certainly has proven to be a lifesaver for this president: it stopped dead in their tracks the impeachment complaints against him. (Pork-barrel is generally defined, as the Supreme Court itself noted, as “an appropriation of national government funds meant for localized projects and secured solely or primarily to bring money to a representative’s district.”)

Amounting to only P70 million per year for each congressman in 2012, the 2014 and 2015 pork-barrel allocations have increased from P87 million to as high as P290 million, as shown in the accompanying table for a selected number of members of the House Committee on Justice that ruled on the impeachment case against Aquino. 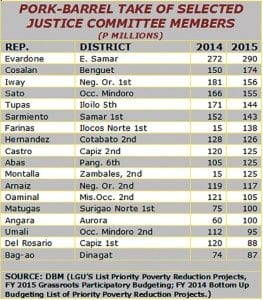 Allocations for Eastern Samar, solely represented by Ben Evardone, who has become one of Aquino’s staunchest supporters, has been the biggest in 2014 and will be the highest next year.

Justice Committee Chairman Niel Tupas will reap his rewards for serving as an Aquino attack dog, as the pork barrel for his 5th district in Iloilo has grown from P70 million in 2012 to P171 million in 2014.

This is the result of a change in the pork barrel system in order to go around the Supreme Court ruling. Instead of designating an amount for each congressman, Aquino has, instead, allocated a certain amount – from P12.5 million to P15 million – for each municipality or city under a congressional district.

Evardone’s Eastern Samar, it turned out, has 22 municipalities, all under just one district he represents, in contrast to the average 5 to 6 municipalities in a district a congressman represents.

Make no mistake, though, that the scheme is egalitarian or is a poverty alleviation program. The allocation boils down to a “per district” scheme, and considerations of population and poverty incidence are irrelevant.

One congressman, one vote

After all, each congressman has one vote, no matter how big or small the number of his constituents. For instance, Abad’s fiefdom Batanes where his wife Henedina represents, with a tiny population of 17,000 will get a whopping P75 million in pork barrel next year, as much as provinces with more than 100,000 residents.

Despite the Supreme Court’s ruling on November 2013 that the pork barrel system practiced since President Corazon Aquino’s time is unconstitutional and should be scrapped for promoting political corruption, her son Benigno 3rd has defied the High Court ruling and carried on the tradition.

Only, he has disguised it with a new name, “Grassroots Participatory Budgeting” projects. His GPB has ingeniously gone around one of the features of the pork barrel that the Supreme Court had deemed unconstitutional, that is, congressmen designating projects after the budget law has already been passed.

The projects listed as annex to the 2014 budget and the 2015 proposed appropriations law are mostly of the “pork barrel” type made infamous by Janet Napoles, the kind from which congressmen can easily skim money off, or extract kickbacks from their favorite district contractors: “livelihood projects,” “capacity-building seminars,” “wells,” “various agricultural projects.”

Aquino and his budget secretary cleverly listed most, but not all, of the local projects they want undertaken in secret consultations with the budget department. Many of the projects were actually not detailed, and were described in the list only as “various projects” or “to be determined.”

Abad has also surreptitiously informed members of Congress that even based on the Supreme Court decisions on the pork barrel and the Disbursement Acceleration Plan (DAP), Aquino and Abad – through a blanket authority he can give to his budget secretary – can approve requests that the projects specified be changed.

What he needn’t tell the congressmen is that those who didn’t cooperate with the administration would likely see the allocations for their districts unreleased for a host of technical reasons. “Either support P-Noy, or gutom kayo [you starve],” Abad reportedly told a small group of congressmen, with his trademark smirk.

With elections in 2016 not really too far away, congressmen are actually in a “last-two-minutes” mode to amass their campaign kitty for re-election and to show their constituents they can bring home the bacon.

The idea for the new-style pork, I was told, came from, ironically, Social Welfare and Development Secretary Corazon Soliman.

The DSWD early in 2012 started a project with an P8 million grant from the Australian government, to undertake research on the feasibility of using “bottom-up budgeting” (BUB) in the Philippines (later renamed as GPB).

In such as system, imported from the business sector, citizens through town-hall meetings or through their organizations propose to government the projects their locality requires. While effective in companies, such a process, though, would be extremely naïve in poor countries, where allocation of resources is so obvious – i.e., to provide jobs.

Soliman and her NGO crowd got into the project with enthusiasm, and “bottom-up budgeting” became that crowd’s flavor of the month. That’s really not surprising as this has been the kind of income Soliman had been getting before she joined government: Most of the P8 million cost of the project involved consultants’ and participants’ per diems, mostly for civil-society/NGO types.

The reality, though, was BUB was very old hat, and it is mysterious why the Australian government financed the research project on it – it was one of the countries that tried it in the 1980s but junked it later. BUB was popular in the 1980s in the West, and had been used to a certain extent even by the US and OECD governments.

It proved to be disastrous, though, even blamed for the fiscal deficits of many states in the late 1980s, and was junked by nearly all governments that have used it by 1992.

When the Court ordered the pork-barrel scheme junked, these issues, of course, would be of no relevance at all to Aquino and Abad.

It emerged as the perfect way to go around the Supreme Court ruling. An added edge of the BUB or GPB would be that noisy NGO people — especially those who received huge consultants’ fees from the project — would be fooled that the BUB process in which they participated in one locality had been undertaken in all towns.

They would be champions for BUB, naively believing that it was the masses, and not the local politicians, who determined the “poverty-reduction projects” in each district.

Abad and Soliman agreed that it could be implemented on a limited scale, to be tested in municipalities with at least a 20 percent poverty incidence and with a mature civil-society presence, or else it would be mobs or the political kingpins that would determine what projects government should fund.

Abad in a press statement about BUB in mid-2013 explained that it would be implemented on an experimental basis in, at most, 300 municipalities.

If what Abad claims is true, that the national government budget starting this year is a grassroots participatory budgeting, the Aquino Administration will be the sole government in the world to undertake a successful bottom-up budgeting, and it will be lauded and studied in all public administration classes in the world.

The reality, of course, is that only spin doctors would study it as a PR case study. It won’t take too long for this GPB to be exposed, just like the ‘tuwid-na-daan’ rhetoric, as just another one of Aquino deceptions.

Thailand has had a revolutionary government since 2014: No problem

Casualty not only de Lima, but what’s left of the Yellow Cult

US fooled del Rosario into losing Panatag but he blames, vents his ire on, China