GO to any mall, from the posh to the pedestrian, and well-dressed young ladies (far more in number than the gentlemen) will approach you to hand you a brochure selling condominium units.

By the roadside along Sta. Rosa in Laguna – said to be the emerging mega-suburbia –you’d see less well-dressed sales people waving to motorists to stop so they could offer their brochures selling lots and houses in gated residential sites. Newspaper ad space is now dominated by property advertising. Do these indicate a booming market, or one that is getting desperate?

A favorite question in coffee shops and cocktail lounges has, indeed, been: Is the property bubble—one of the few major drivers of our gross domestic product (GDP) over the past several years—about to burst? The head of one conglomerate reportedly very recently told his close friends: “Get out of property now. “

The World Bank in its regular reports, which on the whole have been optimistic on the country’s economic prospects—has been including as a “major concern” to growth, as early as May 2013, what it terms as “potential supply bubbles in the real restate industry.”

One major explanation for the real estate’s rapid expansion is the fact that developers put on hold their projects when the global financial crisis broke out in 2009. After that, the corks were unplugged. The country’s low-interest rate regime, due not only to the country’s success in weathering that global financial typhoon but to the flood of liquidity in emerging markets as a result of the US “Quantitative Easing (QE),” also boosted the property market. 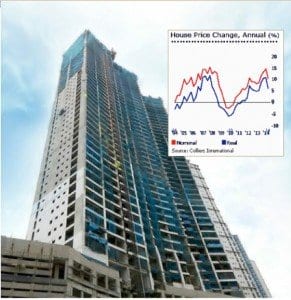 Last year, the property market was given another big boost, when the Bangko Sentral ng Pilipinas restricted banks’ Special Deposit Accounts, which had higher interest rates than savings accounts.

By the World Bank’s figures, about P1.5 trillion in funds were released to the system, and the bulk likely went both to fund developers’ property projects and investors’ purchases of real estate. “Money exiting the SDA facility could further exacerbate speculative growth of real estate, which, together with a rise in interest rates caused by the tapering of quantitative easing in the US, would increase the probability of defaults,” the World Bank report said.

As a result, the World Bank estimated that in some segments, the “number of condominium units in the pipeline is far greater” than the average number of units that was built in the last decade.

While banks’ real estate exposure is limited by regulations to not more than 20 percent, the World Bank had raised the concern that the financial system’s actual exposure may be understated because of “shadow banking,” or in-house financing by the developers.

Global property consultant Colliers International’s reported, though, that there isn’t any sign at all that the high-end market is about to burst, pointing out that the Makati central business district’s average price of a luxury 3-bedroom condominium even rose 13.4 percent this year to end-March to P136,533 per square meter. There is some softening of the market, though, in that it was the slowest price rise since 2012.

The markets for this sector are expatriates who rent them and the country’s elite, who purchase the units as investment and for rental income. But property consultants are starting to ask worrying questions.

Has the market reached the saturation point in terms of expats coming into the Philippines and the rich wanting to buy another luxury condominium? Will the elite, if they notice a slowdown in rental values, no longer buy new posh condominiums?

That there is an oversupply underestimated by prices was indicated by a World Bank report which pointed out that 10,600 units were built in 2013 alone, up from an annual average of 3,500 units in the last five years.

The most vulnerable section of the industry, though, according to the international web-based publication “Global Property Guide,” is the small, mid-end condominiums costing at least P2 million, which many property developers in recent years have focused on.

Their marketing tack borders on selling false dreams, that a small unit could be had for just P15,000 a month. The fine print, though, requires payments on a “balloon” basis after the first or second year, amounting to half a million or a million pesos. Middle-class buyers, nevertheless, still agree to those terms, hoping that after a year they’d double their salaries—which more often doesn’t happen.

The biggest clientele for mid-end property has been OFWs, and the World Bank had estimated that 60 percent of their remittances – totaling $22.9 billion in 2013 – into the country had gone into buying mid-end property.

However, according to the Global Property Guide, their remittances have slowed to an average annual rate of only 7 percent from 2009 to 2013, compared with 17 percent annually from 2004 to 2009. This has been due to political and economic uncertainties in certain host countries (the most extreme cases of which have been Spain and Greece) and the slowdown in the advanced economies, prompting OFWs to reduce remittances to their families here in the Philippines.

There is one market that has frustrated mid-end property markets: the young call-center employees of Business Process Outsourcing (BPOs) outfits. With their relatively high salaries of P30,000 monthly, they had been expected to be buyers of small, mid-range condominium units as they would prefer to be near their places of work. It seems they haven’t.

“The bottom line is that their spending power is not yet strong enough to absorb supply,” the Global Property Guide article said. “Many have family obligations and prefer to live at home or with relatives,” it pointed out.

Based on my own observations, still far from the minds of young BPO employees —as really expected for their age range – is investing in their own homes. They’ve instead been spending their incomes on partying and purchasing electronic devices and top-of-the line clothes. That has given malls and restaurants around BPO centers a boost.

So is the property bubble soon to burst? Reading between the lines of the World Bank reports pointing out its concerns over “asset bubbles” in the real estate market, it very likely will if:

• There is a major downturn in OFWs remittances due to a rise in interest rates in the US and to political and economic downturns in the Middle East, where the bulk of contract workers are; and

• As usual, a sudden phase of uncertainty in our own political and economic stability, triggered by a drastic fall in confidence over the Administration or the economy;

But the chain breaks at its weakest link, a property consultant told me.

What he meant is a scenario in which a developer—not necessarily a major one—would go belly up, as it is unable to sell enough of its units to keep its head afloat. Already there is a bit of concern about a major developer to which banks have stopped lending.

That kind of difficulty even by one property company would send the markets into panic, potential buyers would hear about it and hold off their purchasing plans, causing other property developers to keel over. Impossible? Just think of Fil-Estate, Luke Roxas’ ASB Holdings, and more recently Globe Asiatique—once the favorite of property brokers.

The problem with ordinary mortals like us, and most OFWs, is that we are the last to know about these things. As usual, it would be the elites who would know first that the property bubble has, in fact, already burst.

The Candidates: Ms. Panday, Dirty Harry, the Clone and the Mayor

Leave the 89-year- old grandmother in peace; she deserves that