That we are in the midst of a crime surge, probably the worst we’ve seen in our lifetimes, is undeniable.

Newspaper headlines and TV news programs have been filled with reports of the most horrific and most spectacular of crimes, from the gang-rape and ruthless murder of a seven-year old girl, the robbery-killing in broad daylight of a businesswoman who just withdrew funds from the bank; to the movie-like interception by armed bandits (who turned out to be policemen) of their victim’s car right in the middle of traffic on EDSA.

Just last week, the respected Teresita Ang-See of the Movement for Restoration of Peace and Order said a total of 40 kidnap-for-ransom incidents were recorded nationwide from January to March this year, already half the figure reported in 2008, the year when the number of kidnapping cases was at a record-high.

And these were just incidents that made it to the front pages this past week. Worse, as my colleague Ricardo Saludo exposed in his column yesterday, police chiefs have been caught tampering with their records to lower the crime incidences, something I have never heard done before even during Marcos’ dictatorship.

Social media networks have been buzzing with accounts of hapless office ladies robbed in taxicabs on their way home and much worse, the killing of kidnapped children right after their parents sought police help. Half of TV news programs appear to be dominated by reports of crimes, down to their grisly details. 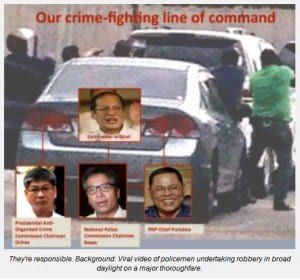 This crime surge falls squarely on President Benigno S. Aquino 3rd, as it always has been the prime responsibility of a state —and therefore, the chief executive—to secure the lives and property of its citizens. It is, in fact, a state’s primordial duty to its citizens, in exchange for their giving up part of their income—i.e. taxes—and of their freedoms —i.e., fealty to the nation.

In Aquino’s case, there are other reasons why he cannot but be blamed for the many lives lost and wrecked by criminals under his term.

First, it is his political right-hand man, Mar Roxas, who is the highest civilian authority in charge of the police, through the National Police Commission which he chairs. Has Aquino ever called Roxas’ attention that he is spending too much time politicking for his 2016 ambitions, and not neglecting the prime peace-and-order mandate of the interior and local government department which he heads?

Second, it is his bureaucratic right hand man, Executive Secretary Paquito Ochoa, who chairs the Presidential Anti-Organized Crime Commission (PAOCC), a super-body created since President Joseph Estrada’s term, which has as members the heads of all government entities dealing with crime.

Under Aquino, the PAOCC has been given annually P1 billion in confidential funds to track down heads of crime syndicates and the most wanted criminals. Yet it can’t even claim to have captured or killed a single known head of a crime syndicate over the past four years.

Senator Panfilo Lacson had made a name for himself, sufficient to catapult him to the Senate for heading the PAOCC during Estrada’s term.

I’d bet you’re surprised that Ochoa is Lacson’s equivalent in Aquino’s government. And I’d bet you’ve never heard of a Reginald Villasanta. He’s the PAOCC’s executive director, who should be the most high-profile government official these sad days when criminals are roaming our streets with impunity.

Thirdly, the head of the main law-enforcement government body, the Philippine National Police, is Police Director-General Alan Purisima, next to, or at par with, Defense Secretary Voltaire Gazmin, the government official closest to Aquino.

Never has there been a PNP head so close in personal terms to Aquino, a PNP officer pointed out. “Purisima has even been like a kuya to the President,” he said.

Purisima had been a de facto bodyguard and big brother to Aquino, even a mentor “to the ways of the world,” as a source termed it.

Purisima is so close to Aquino – in fact, other than his sisters, the only person who can go even to the President’s bedroom—that it is common knowledge in the PNP that he ignores Roxas, officially his boss, and there is an open rift between them. Because of this, the PNP has been divided between those on the “Roxas generals” side and those who are with the “Purisima generals,” that its effectiveness as a united anti-crime body has deteriorated severely.

A website—yes, there is a website of policemen anonymously exposing corruption in their organization—by the “Koalisyon ng mga Pulis Laban sa Kurap,” even alleges that Purisima directly controls the three-man National Police Commission “for several hundred reasons monthly.”

While Purisima blames it on the work of Roxas’ media group, which is for all its inane operations a veteran of many propaganda battles, the PNP chief now has the reputation—both in the police organization and among businessmen dealing with the law-enforcers—of being the worst ever.

He has been hounded by corruption charges. One involves his closing down of the regional offices of the unit issuing fire-arm licenses only to award the courier services to deliver those licenses to an outfit allegedly close to him. Another involves the renovation costing P20 million, bankrolled by a private group, of his quarters in Camp Crame.

Even the jai-alai operator—said to be owned by former President Estrada’s jueteng crony Atong Ang—filed criminal cases against Purisima and his officers for raiding their betting stations, allegedly after they refused demands for protection money for the police of P300,000 per week. “How corrupt can you be if somebody like Atong Ang sues you?” one source quipped.

The most important indicator, though, that Purisima hasn’t exactly been waging a war against crime, is the continued prevalence of jueteng, the numbers game, all over the country.

Where I live in south of Manila, the collectors of bets have even acquired brand-new motorcycles so that they could cover bigger areas. In some parts of the country like Batangas, jueteng is now referred to as “STL,” or small-town lottery, which is the name of the game authorized by the Philippine Charity Sweepstakes Office but which has merely functioned as its front. Jueteng has been estimated to be at least a P20-billion business run by a few known gambling lords.

It is not a secret that jueteng is alive and kicking because it has an organized system of pay-offs—ironically reflected in the PCSO-STL’s contributions to various local agencies—from the local police and government officials to the provincial to the national level. Yes, the national level: the tuwid na daan ends where jueteng money begins.

Purisima is busy with something else, Ochoa is busy running the huge bureaucracy of government and probably with something else also, and Roxas must also be busy with his own concerns—plotting how he can get out of his basement-level popularity ratings in time for the 2016 elections, and smearing the front-runner for the presidency, Jejomar Binay. And we nearly forgot: Justice Department Secretary Leila de Lima with her National Bureau of Investigation has preferred to occupy her time putting senators and their alleged accomplices in jail.

And the top dog? He has busied himself putting the former President in jail, removing the Chief Justice from his post, hijacking the budget for his bribe money and 2016 campaign kitty through the Disbursement Acceleration Program, and pretending to reform the government.

Do you still wonder why there is a crime surge?

The poet Yeats’ words are so descriptive of our times:

Things fall apart; the centre cannot hold;
Mere anarchy is loosed upon the world,
The blood-dimmed tide is loosed, and everywhere
The ceremony of innocence is drowned.

Reef row: US plot in its ‘re-pivot’ to Asia