“The truth shall set us all free,” President Aquino quoted the Bible to argue against allegations that the Senate investigation into the alleged overpricing of Makati City Hall II building was really his private demolition project against Vice President Jejomar Binay. Talk of the devil quoting scriptures, as that old adage says.

“Seek truth from facts,” I would have advised Binay to retort, quoting an ancient Chinese saying, which Mao Zedong popularized in the 20th century.

You certainly won’t get facts from the two main accusers of the alleged overpricing: Renato Bondal and Ernesto Mercado, whose theatrics at the Senate hearing were obviously contrived by some cheap public relations firm. Allegations, yes, by people who obviously had a beef against Binay, and maybe even profit from the exercise.

Bondal brought to the Senate props for his performance—cakes, which he said he bought at P300 each, in contrast, he alleged, to those bought by the Makati city government at P1,000 each for its senior residents celebrating their birthdays. The next day, the city administrator showed receipts that they were bought at P306.75. This “cakes issue” was swiftly deleted from Senator Antonio Trillanes’ list of dirt he could hurl against Binay. 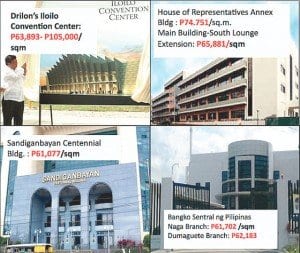 What Trillanes doesn’t know is that every city mayor from Aparri to Jolo now hates him. Senior citizens everywhere are now asking their respective mayors: Why aren’t we getting cakes for our birthdays? Many are even thinking wistfully: I hope we get cakes on our birthdays if Binay becomes president!

In another set of melodrama, Mercado brought to the Senate hearing gym bags he claimed were the kind that contained the bribe money for the Binays. Even Ruby Tuason, who claimed she delivered money to senators, didn’t dare pull that kind of cheap stunt. Why on earth would you claim, as Mercado did, that Binay got a 13 percent cut, an unlucky number even for the most unscrupulous, if not that you thought it a PR trick that such an “evil number” would stick in people’s minds?

Other than being poor liars, there is one other thing in common between Mercado and Bondal: both lost in their bid for the mayorship to Binay’s son Jejomar Erwin (Junjun), the former in 2010 and the latter in 2013. There were rumors in both elections that a big chunk of campaign funds raised for the two—by powerful figures who hated Binay—had not been really used at all, so that both couldn’t get any job in this government.

On a scale of 1 to 10 as accusers, Czech Ambassador Josef Richter who accused Liberal Party stalwarts of demanding a $30 million kickback for an MRT project would rank 9 in credibility, while Bondal and Mercado would rate zero to 1 in credibility.

Neither are the facts we should seek the kind my economics professor, respected columnist Solita Monsod, tried to present—with the same passion she pounced on Mayor Binay’s Dasmarinas gate incident a few months back —in her recent column.

She had reported with obvious excitement her observations in what she herself termed as her “adventure,” most probably as she thought of her favorite “Nancy Drew, Girl Detective” novels in her youth.

Indeed, the adventure involved, a bit hilariously I would think, playing detective as she clandestinely penetrated the lion’s den, that is, the questioned Makati City Hall Building II, to inspect with her very own eyes the quality of the structure.

I imagined Mareng Winnie going around the building with a cap, and with her magnifying glass inspecting the floor or maybe even the toilet cubicle’s walls, muttering to herself, “Tsk, tsk, no indication of special materials, ceilings not furnished, nothing world-class.”

She took photos with her cellphone, and I can imagine Winnie showing these over dinner to her husband, my friend the very sober Christian, who would I think, have rolled his eyes, not daring to ask though —since when, honey, did you become a building appraiser? (You could ask a similar question to the two senators, Trillanes and Koko Pimentel, who rushed to play Winnie’s detective adventure in inspecting the building a day later.)

However, even with her keen powers of observation, I don’t think Winnie could have seen the building’s foundations or steel framework—the hidden things that account for about half a building’s cost. In fact, one of the points made by the COA investigation was that the building “is designed to withstand earthquakes” and that to do this, the builders had to dig the foundation deeper than usual.

Yet, she jumped to a conclusion, uncharacteristic of an academic trained to gather facts, that the building was “overpriced.”

Since when has an academic or even a brilliant columnist acquired the qualifications of professionals we call engineers or more precisely, property appraisers?

While they are not too much respected here, property appraisers in most developed countries form a specialized, highly paid profession requiring years of multi-disciplinary studies and experience to get a license. The most expensive appraisals are for buildings, and take months and at least a million pesos to undertake.

It is plain ignorance of the subject matter, or a mere demolition job, to claim that this or that building shouldn’t cost that much, and should have cost much lower, without having a professional property appraiser to estimate its costs after intensive days, weeks, or even months of investigation.

However, a property appraisal of sorts was actually undertaken, in the form of a special investigation into its construction costs by the Commission on Audit’s Local Government Sector, in response to the complaint filed by Bondal in January 2014 that it was overpriced.

The COA sent Technical Audit Specialists to investigate the building’s five work items: “General Requirements,” Site, Structural, Sanitary, and Electrical Works. The investigation team was totally different from the COA auditors of Makati City from 2008 to 2010, which found nothing wrong in the building’s cost. The COA’s conclusion: “The contract cost is considered reasonable being within the allowable limit of variance.”

But other than having to pay P1 million for an appraiser to come out with the “truth,” is there any way for us to at least have an idea if the Makati Building II was overpriced or not, to determine if this is all a demolition job against Binay by Trillanes and Cayetano?

There certainly is, and I’m surprised Winnie, an economist by training, didn’t do what an economist would automatically do, which is look at the markets, the field of study after all, of that science called economics.

How do you determine if a P700,000 tag on a 2009 Fortuner SUV would be a good price and that such a deal is not a rip-off? Would you look and inspect the engine and the underbody with a magnifying glass to decide whether it’s worth P700,000?

Maybe you would, to pretend you know something about cars, and you’d certainly test drive it.

But the main way you’d determine if it’s worth that is by checking out comparable market prices —ask friends who bought similar second-hand SUVs, research the internet buy-and-sell sites, and compute the price depreciation for such vehicles.

Monsod needn’t have hilariously done the Nancy Drew act to determine if it was correctly priced at P2.3 billion or not. She could have just called the construction company that built it, Hilmarc’s Construction Corp., and asked for its project costs for other government buildings, as I did.

The company did have these facts on hand, and these were actually presented to the Senate but surprisingly – or not so surprisingly – were hardly reported in the mainstream press, especially the country’s largest yellow newspaper.

The company, having been in the business for 37 years with an annual revenue averaging about P4 billion from 2009 to 2013, had enough projects to compare these to the questioned Makati building. It could disclose the costs since these were government projects. In contrast, it couldn’t report costs for its privately owned projects such as the SM Mall of Asia, the GMA Network building, or the FEU Technology building.

Senate President Franklin, I bet, would have squirmed in his big seat if he had been in the Senate committee hearing. Why? Because Hilmarc’s Construction was also the contractor for his pet project, the Iloilo Convention Center. Drilon had earlier reported that the two-floor structure would cost P63,893 per square meter, although the contractor in the Senate hearing said that the costs were escalating to over P105,000. The 11-story Makati building, the COA investigation showed, required a deeper foundation than others of comparable size because it was built on softer soil near the Pasig River, thus the cost of P69,549/sqm.

I can just imagine if a graft case on the Makati City building is brought to the Sandiganbayan, and Binay’s defense lawyers would put on the witness stand the presiding judges of the Sandiganbayan and ask them why their building, adjusted to 2010 prices, cost P61,078/sqm.

Here are the government projects of Hilmarc’s Construction, to enlighten those who judge without thinking first:

• The House of Representatives Renovation and North Lounge Extension, 2012: P67,702/sqm;

That is what “Seek truth from facts” means.

There is another truth we uncovered in all this. You would have been aghast at how Trillanes bullied nearly every “resource person” there. But it turned out to be a hilarious episode when he threatened Hilmarc’s Construction that if it didn’t “cooperate,” he would ask the Department of Public Works and Highways to blacklist it.

DPWH builds roads, which are different from office buildings, which Hilmarc’s builds. If he does not know that, it is no wonder then that Trillanes also demonstrated ignorance, even an arrogant kind, on what he was investigating. This is a dangerous person who would do anything to convince his Boss to anoint him as his vice-presidential candidate in 2016.

Where the heck is our foreign affairs secretary?

The Indonesian billionaires behind the ‘MVP Group’