I realize I could be labeled an alarmist by that question, but for the sake of our nation’s future we have to confront it, and answer it as objectively as possible.

If Congress, because of its P21 billion pork barrel this year, doesn’t care that the planned Bangsamoro bill could dismember the country, I do hope they’d care if the existence of such a state created a haven for the global jihadist war.

Maybe, maybe not. But what precautions are we, as a nation, taking that the Congress isn’t? 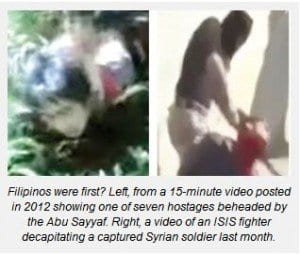 This is especially so as the jihadist organization – the Islamic State of Iraq and Syria – has quite suddenly become a powerful force, leaving a trail of blood and decapitations in that part of the Middle East. (ISIS, also known as the Islamic State of Iraq and the Levant, refers to that region consisting of Jordan, Israel, Palestine, Lebanon, Cyprus and part of southern Turkey).

The rise of ISIS is yet another indication that the invasion of Iraq by the US and its allies—to avenge the 9/11 attack on New York by Osama bin Laden—has become a monumental disaster for the world. Indeed, terrorist Osama bin Laden would have been ecstatic that his 9/11 terrorist attack has been successful in its strategic aim: To provoke the US into a war against two Muslim nations so that it would be seen as a war against Islam as a religion and that around the world would seek martyrdom in a jihad against the West.

Already, reports of Muslim migrants or second-generation migrants in the UK and Australia joining the ISIS emphasize how that organization has attracted Muslim militants even in rich countries. It probably now dwarfs the Muslim International Brigade that joined the Afghans against the Soviets in the 1990s.

A photo of a white boy not yet in his teens, son of an Australian ISIS fighter, shows him gleefully holding the decapitated head of a Syrian government soldier. A British female medical student is seen in a similar gory pose. And, of course, there are those videos of a hooded ISIS fighter with a British accent sawing off with his knife the necks of an American and a British captive in the act of beheading them.

All these have seared the public mind with what I was told just a few years back, the emerging horror story of the 21st century: The US’ Iraq invasion and later Islamic rebels’ victories against strongmen in the Middle East have unleashed an Islamic jihad against the West never before seen.

With this socialist bent that communist leader Jose Ma. Sison succeeded to some extent to implant in him, MNLF chair Misuari received substantial support from Libyan “Islamic-socialism” leader Muammar Ghaddafi.

In the 1990s to early 2000, it was the Abu-Sayyaf group, also known as al-Harakat al-Islamiyya, that sowed terror in Mindanao. It wasn’t ISIS that was the first to video beheadings as an instrument of terror. It was the Abu-Sayyaf that sent similar videos of decapitations of marines to the media in 2000. Even last year, the Abu Sayyaf posted a gruesome 15-minute video of their seven civilian hostages being decapitated as they shouted “Allahu Akbar.” Cadres and clerics of the region-wide Jamaiya Islamiya, alleged to be directly linked to the Al-Qaeda, had been roaming in Maguindanao and Lanao del Sur as religious preachers.

Former President Fidel Ramos, a former military man with extensive intelligence contacts here and abroad, had reported: “At least a hundred of our young Filipino-Muslims have infiltrated Iraq (and joined ISIS) where they get training and they can launch jihad when they come back to the Philippines.”

If Islamic terrorists have managed to find safe havens in the ARMM, what more in the proposed Bangsamoro, as its territory would be entirely under the control of its own police, under the command of its chief executive, the Chief Minister.

That even the Republic’s armed forces will have no business in the Bangsamoro is implied in that article’s section 16, which provides that the “Chief Minister may request the President to call upon the Armed Forces of the Philippines” to engage in operations in its territory.

“May request.” If he doesn’t, the armed forces cannot enter the Bangsamoro territory.

Have our negotiators Teresita Deles and Miriam Coronel-Ferrer even heard of ISIS?

Carpio persists in lying about arbitration ruling vs China