The worst of Aquino’s crimes: His lynch mob vs. Corona in 2012 - Rigoberto Tiglao
Skip to content
Order Books! Limited stocks!

Today marks the anniversary of the day of one of our Republic’s greatest infamies. That few people realize it is another demonstration that indeed, we Filipinos have very short political memories, one of the biggest reasons why we have failed in nation building.

On May 29, 2012 the Senate removed the Chief Justice of the Supreme Court, the head of the judicial branch of government which is co-equal with the executive and legislative branches, for failure to declare his dollar assets in his Statement of Assets and Liabilities and Net Worth (SALN), which nobody in government really does.

Rather than the evidence against Corona, it was the billions of pesos given the congressmen and senators in pork-barrel funds and money through a new Aquino scheme called the Disbursement Acceleration Plan, it would be disclosed later, that made them vote Corona guilty. The five months during which we were regaled by then Senate President Juan Ponce Enrile with his legal acumen and apparent impartiality was all for show. 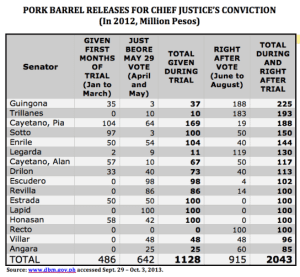 The smokescreen that there wasn’t any 30 pieces of silver for the crucifixion of our Republican system of three co-equal branches of government was the campaign of vilification against Corona, the likes of which we really hadn’t seen before, even if we include the demonization of President Gloria Arroyo.

The difference between the smear drive against Corona and Arroyo is that in the latter’s case, state entities were used, from the Congress, the budget, the BIR, the Land Registration Bureau, the Ombudsman and even the central bank, which controls the Anti Money Laundering Council.

It was a pyrrhic victory for Aquino though. Removing Chief Justice Renato Corona took five months to undertake, with his target refusing to resign before the trial started, which Aquino thought he would as Ombudsman Mercy Gutierrez did.

However, the impeachment, the vicious character assassination against Corona and the threat to remove another justice, Mariano del Castillo, failed to intimidate the Court to rule for Aquino in the case of his family’s Hacienda Luisita.

On April 2012, at the height of the impeachment trial, the Court ruled with finality that the sugar hacienda had implemented a bogus land reform. It was ordered to distribute its vast estate to its farmer-workers, and for them to be compensated a tenth of the cost his appointee Lourdes Sereno, who replaced Corona, had propounded.

Even if Aquino had proven by some miracle to manage the country well after May 2012 — which he didn’t — his attack on the Supreme Court, if only we had a patriotic and independent Congress and armed forces, should have been enough to remove him from power.

Never has a Philippine president schemed and mobilized illegally everything under his control as chief executive to attack the head of an equal branch of government.

What kind of country have we become that the bribery to convict Corona had been exposed, yet we have not as a nation moved to correct such injustice? We have swept this colossal scandal under the rug.

Philippine historians in the future will be astonished how Aquino was able to mobilize and mesmerize institutions, which theoretically, are our bastions of democracy, to attack Corona.

I’ve never seen such a vicious demonization campaign against an individual who stood his ground. Aquino gave a new meaning to that term “throw everything but the kitchen sink”; he threw everything against the Chief Justice, from the petty to the cruel.

Corona’s passion for learning represented by the Ph.D. he earned from the University of Sto. Tomas, the oldest university in Asia, was distorted by a writer who claimed the university “bent rules” to accommodate him. It was the banner story by the country’s biggest newspaper, simultaneously with a news website, whose ownership remains a mystery. That was a total hogwash.

I am astonished that those who were at the lead of this lynch mob still strut around as if nothing had happened. A megalomaniac blogger posted on her blog details of what she alleged were Corona’s bank accounts. When people ignored her post, she gave it to Liberal Party congressman Rey Umali, one of the prosecutors, who, after he leaked the illegal information, timidly told the Senate he got the data from a “small lady” whose name he forgot.

Another yellow operative congressman, Jorge Banal, fantastically claimed that information on Corona’s accounts he got and gave the panel, was in an envelope he found at the gate of his residence. Harvey Keh of the Ateneo School of Government tried to get Senate President Juan Ponce Enrile to admit as evidence these illegally acquired documents on Corona’s bank accounts. The former martial law administrator rebuffed him and lectured him on the principles of fair play and the rule of law.

We would only know later what these bungling attempts to have illegal documents adopted by the impeachment court were all about.

The AMLC had already thrown our bank secrecy and privacy laws to the dustbin, and had given Aquino’s operatives details of Corona’s bank accounts even before the trial stared. Their only problem was how to distort and disclose it. Ombudsman Conchita Carpio-Morales showed them how.

With dramatic flair as she waived purportedly AMLC documents given to her, Morales claimed Corona had $12 million in his dollar accounts. Why, it was a Commission on Audit member, Heidi Mendoza, who analyzed the data and came up with that figure she reported!

How could they think we are all stupid, or have never had bank transactions. Morales and Mendoza added up transactions over nine years, not Corona’s balance. He had only $2 million, most of which he had accumulated as a private corporate lawyer in the 1980s. Count the debit and credit entries for each of your transactions in your bank book, and you’ll find you’re a millionaire.

Did Morales ever apologize for her colossal error? I cannot comprehend why Morales could have treated her former colleague in the Supreme Court as a common criminal, a money launderer. Aquino had even destroyed people’s sense of decency.

They claimed Corona had P200 million in his accounts, which he couldn’t have accumulated with his salary as chief justice. It turned out to be his savings when he was still a private lawyer, proceeds of sales of property that was part of the inheritance of his wife, and the savings of her daughters and son commingled with his account in order to command a higher interest rate.

It was lie after lie against Corona. Land Registration Authority head Eulalio Diaz II, an Aquino appointee, claimed his office’s records show that Corona had 45 real estate properties. It turned out that most of these 45 properties were astonishingly not in Corona’s name, in a namesake’s name, or which the Chief Justice had long ago disposed of. How many properties did Corona own? Five.

Corona was hiding a property in California, an allegation leaked again by Aquino’s operators to that dingbat blogger. It was bought dirt cheap during the real estate crisis in the US in 2008, by Corona’s daughter Charina, a physical therapist who worked two jobs to cough up the money for the mortgage. Aquino even used a Corona family squabble with his wife’s relatives to portray him as an evil man. A 90-year old nun was virtually dragged out of the convent, so she could be interviewed and misquoted to say something bad about the Coronas.

Why do we allow such liars who besmirched not only a person’s reputation, but also that of his entire family, to go unpunished?

There were eight articles of impeachment against Corona. Each was proven wrong by Corona’s defense counsels that by April, the Liberal Party prosecutors sheepishly announced they will pursue only one article, that on Corona’s SALN.

It was because they already had illegally acquired from the AMLC details of Corona’s bank accounts, even if the matter of whether Corona’s failure to declare his dollar accounts violated his oath of office was debatable. After all, we have a secrecy law on dollar bank deposits. And after all, the penalty for submitting an inaccurate SALN was to correct it within a year.

It would be more than a year later in September 2013, that Senator Jinggoy Estrada — when he had become Aquino’s next target, together with Enrile and another senator, Bong Revilla — would rat on Aquino, shocked and exasperated over the double-cross of his president, whose Justice Secretary subsequently got him jailed over the misuse of the pork-barrel funds.

I endured the tediousness of watching the televised trial for five months, and spent many hours studying the case, and asking legal experts for their analysis.

It turned out to be a waste of time. It was a charade, as much a moro-moro as congressman Rufus Rodriguez’ months of hearings on the BBL are now.

Estrada disclosed that administration operatives bribed him and the rest of those who voted Corona guilty, with pork-barrel funds, and with money raised through the Disbursement Acceleration Program Fund. Senator Bong Revilla even narrated how he was brought to the Palace in a car driven by Mar Roxas himself to meet with Aquino, who asked him to vote Corona guilty. In the meeting was Budget Secretary Florencio Abad, who assured him his P100 million pork funds would be released if he cooperated.

The bribery charge had been actually made by defense counselor Judd Roy during the trial in early 2012, with Abad declaring that “not a single centavo was released in PDAF funds before, during, and after the trial.”

But such data is routinely posted on the DBM’s website. I collated these and reported the exact amounts in PDAF and DAP funds released immediately before, during, and after the impeachment trial.

Nations are built step by step as its institutions are strengthened in each episode as it confronts a crisis. Aquino severely damaged our institutions of democracy — Congress, the Supreme Court, the press, and even the bureaucracies of the executive branch — in order to remove Corona.

For that alone, he will be judged by history as the worst ever president of this country.

Binay vs Roxas: A class-war simulation

Silliest electoral system in the world