There are at least three explanations why President Benigno Aquino 3rd anointed his sidekick Interior and Local Government Secretary Mar Roxas as his and the Liberal Party’s presidential candidate next year despite his unpopularity, which he hasn’t been able to correct after five years on the job and with all government resources at his command.

One explanation is that Aquino’s cabal has planned and figured everything out:

That the hidden lump-sum, discretionary and pork-barrel funds, amounting to P424 billion, according to Senator Panfilo Lacson, would be more than enough to buy the loyalty of the local political bosses, and if that fails, to massively cheat in different ways in 2016.

That with his three-year stint as local government secretary, Roxas would be able to get local politicians to support him on election day.

That the popularity of leading candidate Vice President Jejomar Binay would fall like a stone after his supposed arrest on plunder charges in the coming months. Aquino’s camp may now be calculating that Binay’s political machine would grind to a halt if he would be put in jail on trumped-up plunder charges, and unable to issue orders – or checks. Already they think, Binay has lost his base – Makati City – with the suspension of his son as mayor, and therefore, has lost warm bodies for his campaign.

I have also heard rumors that Manila mayor Joseph Estrada has reached an agreement with Aquino for his son, the jailed Jinggoy, to be freed and the evidence against him destroyed in exchange for his last-minute support for Roxas. That is the reason, they say, that Erap didn’t show up at Binay’s announcement of his presidency.

Despite his conviction, Erap is said to have at least a solid 10 percent command vote of sorts among the masses. Similar deals allegedly are being worked out either with Senator Juan Ponce Enrile in exchange for his money and for votes from the North, or with Senator Bong Revilla, for his celebrity and Cavite votes. (Yes, that could be the real purpose for jailing the three senators, which Aquino has used as his main propaganda item that he has fought corruption.) 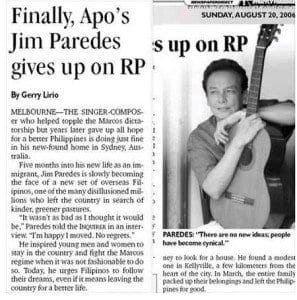 The Yellow Cabal’s political calculus could also be as follows: If Senator Grace Poe-Llamanzares, Davao City Mayor Rodrigo Duterte and Senator Miriam Defensor-Santiago run, they could eat into Binay’s stable 25 percent core support, enough so that Roxas could win with a few hundred thousand votes.

There are also rumors that the Iglesia ni Cristo’s internal problems have been instigated by Aquino’s operatives as a warning shot – for the sect to withdraw its alleged commitment to support Binay in 2016, or at least for it to be neutral in this contest.

Aquino had thought that he could convince Llamanzares to be Roxas’ running mate, and that her popularity would somehow – a hope for a miracle, I think – rub on him. With Llamanzares refusing, and becoming so ambitious that she wants to run for President, Aquino just didn’t have any choice, since he absolutely cannot rely on her, essentially a political tabula rasa. What if for some reason, she rides the wave of outrage against Aquino when he steps down, and allows the wheels of justice to grind against him and put him in jail?

A very plausible reason why Aquino anointed Roxas was posted by someone on my Facebook page, with the now-anointed allegedly telling the President (translated from Pilipino to English):

“Choose another candidate at your own risk. Who knows who gave you that Porsche Carrera in 2011? What were your orders to Alan Purisima and the military brass when the SAF 44 were pinned down in Mamasapano? For whose sake was the shakedown of the Czech suppliers for MRT-3 if it wasn’t really for Ballsy? Who is receiving the usual payolas from jueteng operations? How much Pagcor confidential funds are being delivered to you? If the Malaysians had a stash for you, how much was it in exchange for the BBL? Who have your favorite contractors been in Tarlac for the projects funded by P2 billion from the DAP? For whom were the envelopes delivered to Malacanang by the two past Customs chiefs? Who had a cut in the military-supplies procurements? Do you want me to tell you other reasons why you should anoint me?”

Another explanation why Roxas is Aquino’s candidate, of course, could be pure hubris on their part. With an opposition really so feeble – as demonstrated during Aquino’s State of the Nation Address last week – they still believe that even if Roxas was really mainly responsible for the daily hell working class Filipinos go through everyday – the MRT-3 mess – they could still get him elected President.

Or have Aquino and Roxas got something up their sleeves to overcome this biggest obstacle to their 2016 dreams? That, on Wednesday.

Jim owes me P10 million
And for a bit of fun, and funds maybe…

It’s really another cautionary tale in this digital age. Never ever open your Facebook page, and write something on it, if you woke up on the wrong side of the bed, or had one too many.

Reacting to a joke I had posted on my FB account that we should forgive Aquino fan-club president Jim Paredes for his rantings as he may have been kicked in the head by a kangaroo in the outback of his country now, Australia, he angrily posted on his FB page:

“Dear classmate Rigoberto Tiglao: I am not an Australian citizen.. YOU ARE A LIAR or a really bad journo who doesn’t check the facts. If you can prove me wrong, I will give you 10 million pesos, more than you ever received from PGMA admin.” [caps his]

First of all, Jim wasn’t and couldn’t be my classmate at the Ateneo High School, but a batch mate. I was in the “B” class for semi-honors students, with “A” being the honors class. Jim was in the G or H class.

Jim is correct, though, that P10 million is more than I “ever received form the PGMA administration.” It would have taken me with my Cabinet Secretary’s secretary two decades to accumulate P10 million and that’s assuming I saved everything I received. (Jim was known in our high school for his singing and dancing, not for thinking and writing.)

Jim must have forgotten he boasted on record he left the country to be an Aussie. I easily accessed that article published in the August 20, 2006 edition of the Philippine Daily Inquirer, an image of which is included in this article, with the headline “Jim Paredes gives up on RP.” You can easily read the article by googling that title.

Among the relevant quotes in that article:

“The singer-composer gave up all hope for a better Philippines and is doing just fine in his new found home in Sydney, Australia.”

“’I’m happy I moved. No regrets,’ Paredes says. He urges Filipinos to follow their dream, even if it means leaving the country for a better life.”;

“Paredes applied for immigration when he was 47 [he’s 63 now], two years past the age ceiling set by the Australian government. But the Embassy allowed him to leave, noting that he was ‘a distinguished individual.’ In March (2006), the entire family packed off their belongings and left the country for good.”

Jim, though, didn’t seem to be too happy there as the Inquirer quoted him: “I don’t have that many (guitar) students and it doesn’t pay much of the bills.”

“Paredes said that he still loved the Philippines and would want to visit once in a while. “

I think that PDI article – quoting from the horse’s mouth, so to speak – is proof enough that Jim chose to no longer be a member of this “hopeless” country and instead, join that Down-Under nation. If his idol Aquino gets to have the Freedom of Information bill enacted, you can bet I’d be the first in line to file a request at our Immigration Records to find out what passport he uses.

Jim, though, is an upright person, a Daang Matuwid true believer, so there must be something to his claim that he is not an Australian citizen. So what happened? Did the Australians at the end of the day deny his petition to become an Aussie? Did he refuse to become one, even as his entire family has taken than path? Why?

However, I think I have presented proof he demanded, and he should pay me ASAP the P10 million he wagered.

I’d like to share my bounty with my readers. I am, through this column, making a legally binding commitment to give 50 percent of the proceeds to whoever could collect my P10 million from Paredes.

Duterte on a roll as he starts his third year

The Philippine suit: A brilliant US machination?