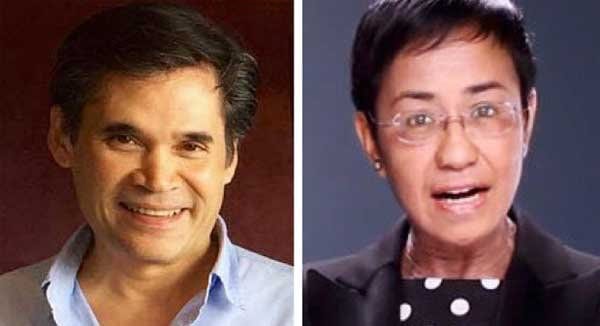 AND THEN THERE WERE TWO: The only remaining board members, Ayala and Ressa.

All but two of its seven board members in 2016 have abandoned it, with one, Glenda Gloria, on an academic fellowship in the US until September this year. That leaves it without a functioning board, and therefore according to our corporate laws, no longer a genuine corporation that can conduct business in the country as a “juridical person.”

Only its “chairman” Manny Ayala—who is also a director of the Energy Development Corp., owned by the Lopez clan that had been supporters of President Aquino—and its editor Maria Ressa remain to claim as its board members. The Corporation Code requires corporations to have a minimum five members in its board of directors.

In Rappler’s “About Us” section, it lists only its “2014-2016 Board of Directors.” Aside from Ayala, Ressa, and Gloria, they are: James Bitanga, Nix Nolledo, James Velasquez and Felicia Atienza.

The latter four directors though resigned from 2014 onwards, with Bitanga, who had also been its treasurer, the latest to leave the firm a few months ago.

Rappler is in effect peddling fake news about the composition of its board in its very website.

A Rappler post updated January 2018 reported that lawyer Dan Albert de Padua who had been connected with GMA Network was a member of its board. This is another fake news: De Padua informed me that he resigned from the board in December 2017.

The board members who have resigned have not given me the reasons why they did so, and I can only speculate.

Was it because they weren’t consulted over Ressa’s taking in $1.5 million in funds from two American companies, and weren’t being informed how this money was being spent? Was it because they realized they were merely corporate fixtures and were not being consulted at all on the firm’s moves, even on its rabid anti-administration editorial stance, with Ressa treating the company as her own exclusive property?

AND THEN THERE WERE TWO: The only remaining board members, Ayala and Ressa.

Rappler and the Yellow Cult have been shrieking to the world that the Securities and Exchange Commission’s order to close it down because it violated the Constitution’s ban on foreign money in media is a case of President Duterte’s suppression of press freedom.

Its former editor-at-large Marites Vitug even got the website and magazine of the Nieman Foundation for Journalism at Harvard to post her shamelessly unprofessional hatchet job on Duterte on this issue, claiming that Philippine journalists are outraged against “attempts to shut down Rappler.”

Accompanying the article was a photo portrayed to be media men demonstrating against Duterte. As their placards’ notes showed though, they were militants of the communist-led Kilusang Mayo Uno (May One movement), carrying placards with slogans that have nothing to do with press freedom, such as “Diktadurang Duterte Sawatan” and “Duterte Pasista Diktador!’)

Taking advantage of its editors’ obvious ignorance of such a faraway country, Vitug has managed to drag the Neiman Foundation, devoted to “promote and elevate the standards of journalism,” as its slogan puts it, to her level of partisan and biased writing, and to portray to the world a false image of the country.

The fact that Rappler has been posting in its website a composition of its board that is patently inaccurate raises questions on whether the two American firms – North Base Media and Omidyar Network – were accurately informed of Rappler’s real situation when they made their $1.5 million investment in the media firm.

Rappler also has been abandoned by its original main Filipino stockholder, property tycoon Benjamin Bitanga, father of former treasurer and board member James. “I stopped funding Rappler more than three years ago,” the tycoon informed me through an SMS message.

Bitanga appears to have left Rappler totally, which puts Rappler in a deep quagmire. As Rappler’s main stockholder through his Dolphin Fire firms, it is Bitanga who has the corporate power to vote most of the firm’s directors.

Bitanga apparently has refused to even vote anyone into the board. “They don’t have a quorum now, so Ayala is ‘acting chairman’.”

With its principal stockholder on record having stopped funding Rappler, where has it been getting funds to continue to operate? That has resuscitated my suspicions that it was set up in January 2012 as the Yellows’ internet propaganda machine. Indeed, it was so potent in the case of Chief Justice Renato Corona’s impeachment that started—not coincidentally I think—that same month. In its five years of existence, Rappler has not published a single news article or opinion piece critical of President Aquino. I was told that a prominent Spanish-Filipino magnate, known to be a close friend of Aquino and Ressa, was bankrolling it. I suspect he has continued to do so after Bitanga totally stopped funding it three years ago.

Rappler has not only violated the Constitution’s ban on foreign investments. It appears to have been violating since 2017 even the Corporation Code, which requires that a corporation’s stockholders vote annually its board of directors, which in turn designates its president and other officers of the firm.

Without a board elected by its stockholders, and therefore no entity to designate its officers, how can Ressa still claim to be its president and editor-in-chief?

How can a “Rappler, Inc.” appeal to the Court of Appeals to reverse the SEC ruling that it had violated the prohibition on foreign money in media, when it has become a non-entity as defined by our corporate laws?

Read about it in this newspaper.

That development would explain why most of the board members of the two firms have resigned from it.

The truth about Ressa and her vilification of Duterte