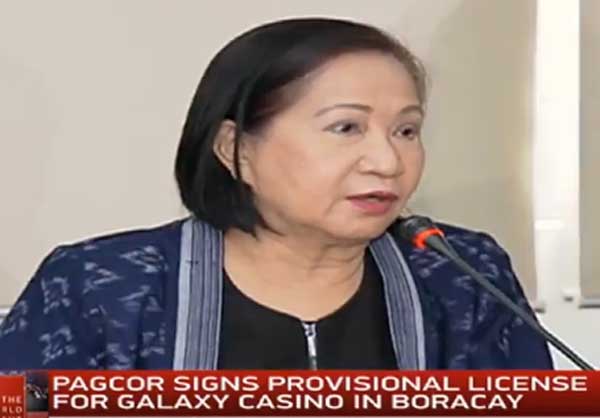 Two huge casinos in Boracay? Are they crazy?

TO be quite frank, I was stunned when Philippine Amusement and Gaming Corp. (Pagcor) chair Andrea Domingo told the press a few days ago that the agency would approve not one, but two mammoth casinos to operate in Boracay. The other day, she even had the signing ceremony for Pagcor’s grant of a license to a Macau firm to build a casino there televised.

The project is a joint venture between Macau gaming giant Galaxy Entertainment Group and a unit of listed firm Leisure and Resorts World Corp. This company’s biggest individual stockholder is Negros Occidental Rep. Alfredo Abelardo Benitez, a Liberal Party stalwart in that province until he defected to the ruling PDP-Laban before the 2016 elections. The other big stockholders are said to be a group of big stock market players that include Willy Ocier, Wilson Sy and Eusebio Tanco.

The other casino will be at the Boracay Newcoast of property magnate Andrew Tan, in a joint venture with the Malaysian casino conglomerate Genting, which will start operations four months from now, Domingo said.

Has Domingo been so busy that she hasn’t been reading the papers? Hasn’t she heard that President Duterte last month made an earth-shaking declaration that Boracay has been turned into a cesspool by greedy enterprises there, who don’t care about the delicate island’s sustainability as one of the world’s top beach areas?

Hasn’t she heard that Environment Secretary Roy Cimatu dropped everything to scramble to inspect for himself the tourist resorts’ compliance with environmental laws, and has ordered the closure of 300 establishments there?

Pagcor head at the televised signing ceremony the other day.

Doesn’t Domingo know that Cimatu and Interior Secretary Eduardo Año – both former military men, who would appreciate how difficult a situation is – have recommended to Duterte that Boracay be totally closed down for six months, to give government time to really study and decide how to prevent the total destruction of the island’s ecosystem?

Doesn’t care
Whether Domingo realizes it or not, her statements made at this time are a slap on the face of Duterte, as if she doesn’t care what the President who appointed her to the post has been saying about Boracay, that she’ll go ahead with her casino plans for the island.

I’m surprised too that Pagcor board member, my colleague in the profession, Philippine Star columnist Carmen Pedrosa, known to be an ardent environmentalist, hasn’t written anything about Boracay nor opposed her firm’s disregard for Duterte’s raising the alarm about the island.

The very least Domingo should have said to the press was that she would be asking for guidance from Duterte on whether or not the casino plans for Boracay that she is enthusiastically pushing should be put on hold until it has become clear what the administration’s plans are for the island.

Nope. Not even a mention of Duterte and his recent moves. Instead, she signed the contract with the Macau firm on the day before the President was reported to have decided to order Boracay’s closure, on the recommendation of the DENR and the DILG.

The only thing she could say was that in the light of Duterte’s statements, “regulators are paying close attention to the environmental protection plans of the project proponents.” What she is saying is, “It’s not our concern, but the DENR’s.”

Has she even consulted with the DENR on how to make sure that the new casinos strictly comply with environmental laws? Tan isn’t exactly known to be a tree-hugger, and I’m wondering how he got environmental clearance for his Twin Lakes project at the slope of the ridge that overlooks Lake Taal which would build a huge artificial lake there.

The talk in the stock market on the other hand is that the Chinese-owned Global Entertainment Group is bankrolling almost all of the planned casino complex there which, if true, would mean that we are turning over a significant chunk of Boracay to foreigners.

Sleepless nights
Boracay resort owners have been having sleepless nights since Duterte announced the possibility that the island would be shut down to allow it to recover its environmental health.

Already the conspiracy theory gaining ground among resort owners—many of which actually are mom-and-pop enterprises—because of Pagcor’s casino announcements is that the plan is to hand over the island to big businesses. This is especially since Domingo expressed confidence in big business going into Boracay: “If you’re investing $500 million in a hotel, you wouldn’t dump your waste into the [sea],” the Pagcor chief said referring to the cost of the casino complex as claimed by the Macau proponents.

Domingo appears to be justifying her decision by pointing out that Tan and Genting “made their application and submitted all their requirements in 2014. So that one has also been approved, and they [already]built a hotel.”

Going by Domingo’s logic, the health department should continue the Dengvaxia vaccination program since it was approved and even implemented in 2015.

If Domingo is worried that Pagcor would be sued for contract violation, she should do some research and learn that the Supreme Court* in 2008 ruled that the entire Boracay island is state property, that private ownership of any land there is illegal under two presidential proclamations issued by Presidents Ferdinand Marcos and Gloria Arroyo. How can Pagcor issue permits to casino operators who really don’t own or leased the lands their buildings will be built on?

To have casinos in Boracay is such a hugely stupid idea as there are enough tourists enjoying its beaches, and we don’t really need gamblers there. As in the case of Fil-Estate’s golf course there – which opened the floodgates during the Ramos administration to big-businesses’ invasion of Boracay – huge projects such as casino complexes should be built only in the Caticlan mainland, which would boost the economy there.

Or, is there something I don’t understand in Pagcor’s enthusiasm over giving big casino operators permits to operate in the island?

Boracay is such a gift of nature to Filipinos, and not a place for Chinese and Malaysian casino operators to build their gambling halls, for hundreds of thousands of gamblers to damage its beauty and sustainability.

Why does Poe refuse to take a DNA test with Marcos Jr.?