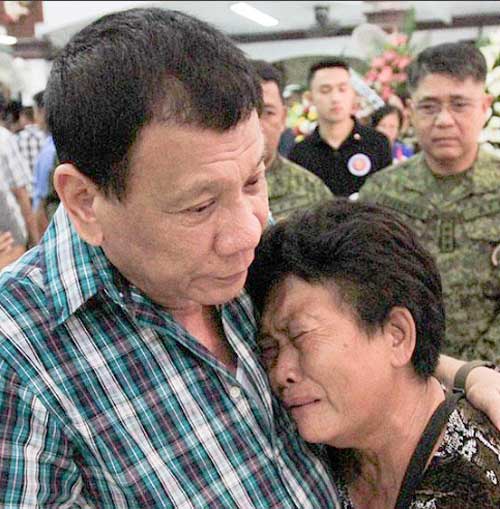 A PHILIPPINE Daily Inquirer article the other day, to my utter surprise, reported: “President Rodrigo Duterte may be doing something right as eight in every 10 adult Filipinos across the country and socioeconomic classes trust him and approve of his performance, according to the results of a recent Pulse Asia survey.”

Also a few days ago, the Social Weather Stations released a survey that showed 94 percent of adult Filipinos said they are happy with life in general, a record high. Levels of a people’s happiness often reflect their satisfaction with their main leader, i.e., the president (or prime minister) since one determinant of happiness is the absence of worries over where one lives.

What could explain Duterte’s popularity, which our politicians and those who aspire to be our leaders could emulate? What would be, in that genre of lists, his leadership lessons?

I think the following:

1. Be yourself. Don’t pretend to be somebody else.

The one thing about Duterte even his vociferous critics can’t deny is his authenticity, his what-you-see-is-what-you-get character, which explains why he seems to have a foul mouth.

EMPATHY: Duterte comforting mother of a soldier killed by the NPA in Cagayan de Oro.

Having been a full-time journalist through five presidents, I can assert that every one of them tried to be somebody they were really not. Even President Estrada pretended to be one with the masses, even if that was really only his movie persona. The worst pretender of course was the spoiled brat Benigno Aquino 3rd. One could even feel that he was performing whenever he talked to the public. His sidekick Mar Roxas shouting “P***** ina” at a rally was a pathetic attempt to be somebody else.

And if you think the masses wouldn’t like your real self, so that you have to pretend, then find a different career. You’ll just be wasting your precious time and your billions of pesos trying to project a different person from what you are. People will see through you.

2. It’s not important what you say, but what you do.

Duterte seems to enjoy shocking people in his speeches and doesn’t care if the hoity-toity elites are aghast at his curses and invectives.

Because of this, he would have easily been the most unpopular president in just his first year in office. But the people feel he’s doing what he should do—waging war against illegal drugs that was a scourge kept hidden under the rug especially by his predecessor, fighting corruption, building infrastructure, and leading the country away from its vassalage to America.

This isn’t in most leadership-lessons lists. Britain’s Churchill led his people in war by his eloquence, while communist supremo Jose Ma. Sison led revolutionaries totally by slogans. In ancient Greece, the philosopher Plato saw politicians as essentially demagogues.

3. Focus on one crusade at a time, but let your subordinates pursue their advocacies.

Duterte’s current indisputable “branding” as the President who will end once and for all the plague of illegal drugs—till the heavens fall, as it were, i.e., even if Western media and global institutions condemn him for allegedly trampling on human rights.

That has been his focus, although it seems he is moving, with the war on illegal drugs half-way won—“on a scale of one to 10, we’re at six now,” he says—towards an anti-graft campaign, an issue that also dominates Filipinos’ minds. That he will demolish the illegal drug industry has been the single message the masses clearly hear, and they’re happy with it.

But in the meanwhile, his other Cabinet secretaries are doing what they are supposed to do: Finance Secretary Carlos Dominguez is undertaking a difficult tax reform program; Speaker Pantaleon Alvarez has made the House of Representatives a smooth-running factory of needed laws and an investigator of the powerful’s crimes; Public Works Secretary Mark Villar is implementing the “build, build, build” program; Environment Secretary Roy Cimatu is cleaning up the cesspools created by greedy resort operators in once pristine areas.

4. Defy and challenge the powers-that-be. The real power is people’s support.

The default condition of most societies, which make up the obstacle for a country’s growth, are its ruling elites that defend the status quo. Reforms would be a walk in the park, if there were no powers-that-be that block these.

Duterte has challenged not only the worst of the economic elites who have, among other crimes, evaded taxes and refused to pay rent for prime government property they have held since Marcos’ time; and their weapons—the Catholic Church and the once most-powerful Yellow media tandem, the Philippine Daily Inquirer and ABS-CBN tv network.

After all, the Catholic Church had functioned as a tool for elites to rule. A few centuries after its emergence, it became the state religion of the most powerful empire at the time, the Roman Empire and after that, of the colonies-seeking European states, which told the masses that the emperors and kings were God’s representatives on earth. The Spanish crown was able to rule their most distant colony, the Philippine islands, for four centuries not really through soldiers but through the friars.

That media tandem on the other hand openly declared they were weapons of the Yellow Cult, since February 1986 the vanguard of the Philippine elite.

Duterte has also defied the United States, which has through its local lackeys, determined our foreign policy that supported its hegemony in the world.

Much of Duterte’s popularity is because Filipinos sense that he is rebelling against the ruling elites that have controlled this nation since its birth.

I’m not sure though that he sees and intends to curb the shameful yet hidden dominance of a foreign magnate, the Indonesian tycoon Anthoni Salim, over our public utilities, infrastructure, and even media— industries supposedly reserved to Filipino control yet through which the foreign magnate and American investors have been getting billions of dollars in profits, swiftly moved out of the country.

5. Lastly, have a strong sense of empathy, and express it.

What all our past presidents have had, or pretended to have, was sympathy, which the dictionary defines as “feelings of pity and sorrow for someone else’s misfortune.” Empathy is not sympathy; it is the “ability to understand and share the feelings of another.”

Empathy is what Duterte expresses as he embraces the widow of a Marine killed in action, or shakes the hand of a wounded in a military hospital, often with misty eyes. The pretension of sympathy is Benigno Aquino 3rd in a wake, where the camera even catches him guffawing at something that suddenly crossed his mind.

Human beings, psychologists say, have an innate capacity to sense empathy. After all, evolutionary scientists claim that this was a virtue for a tribe’s survival: its members failure to sense strangers’ deceit would have meant their extermination.

Or perhaps nations are still merely bigger versions of a family, and Filipinos especially do not see their presidents as merely chief executive officers or managers of the nation. In their hearts, they yearn for a leader who reminds them of their father or mother, who understand their feelings.

The bad news for some is that, according to some neuropsychologists, there is a physical basis for some persons who have no empathy: their lack of the so-called mirror neurons, which have been found to be deficient in some individuals diagnosed as autistic.

My colleague Francisco Tatad in one column described former President Aquino when he was interviewed at CNN a few days after supertyphoon Yolanda struck: ”Aquino looked completely detached, uninvolved, unfeeling, unaffected by the incredible human tragedy that has covered the world with grief and pain.”

That describes exactly the absence of empathy. So, if you detect in yourself such a weakness or lack of empathy—which seems to be the character of all Yellow leaders—spare the country and yourself from suffering. Don’t run for President. Be content being a senator or a governor of your home province.

‘Heneral Luna:’ What is nationalism?