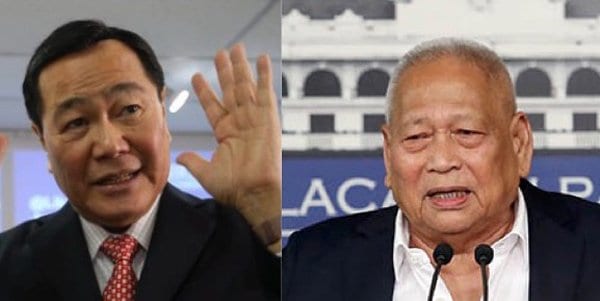 FOR starters, Supreme Court Senior Associate Justice Antonio Carpio shouldn’t be blabbering about our territorial disputes with China, or with any other nation.

He is not a private individual, but a member of the country’s highest tribunal, and as such, his words carry the weight of the prestige and integrity of the Supreme Court that represents the third branch of our Republic. Have you ever heard a justice of the US Supreme Court comment on America’s numerous territorial disputes, or its military invasions of sovereign nation, or even about Russia’s alleged expansionism?

Carpio should study our laws: It is the President who is the chief architect of the Republic’s foreign policy. Would he appreciate it if the executive branch disputes the Supreme Court’s decisions, calling what it doesn’t like unconstitutional or unpatriotic?.

To understand this: Will Carpio’s words on the South China Sea issue carry the same weight, after October next year when he steps down from office? Or will  he be relegated to the same level as many analysts in this town like Richard Heydarian, Victor Manhit or even Rey Casiple, eager-beavers in reading their names in the newspapers?

Why is Carpio talking about our territorial disputes with China when he isn’t even an expert on international law, but has engaged for most of his legal career in the more lucrative practice of corporate law?

Patriotism? But instead of clarifying issues, he obfuscates them and picks only the data that would portray China as out to conquer the Philippines. If President Duterte ever believed Carpio’s claims, and if hypothetically we had enough arms, we would have gone to war with China.

Carpio is scaring us
Only recently, Carpio issued a statement to the press: “China’s construction of huge air and naval bases, and now the introduction of nuclear-armed strategic bombers, are all designed to intimidate into submission other claimant states, including the Philippines, to accept the nine-dash line as China’s national boundary in the South China Sea.”

Carpio obviously intends to scare us, and he doesn’t explain why he refers to “huge air and naval bases,” when all of China’s infrastructure on reef and atolls in the South China can’t compare for instance to the former US military bases in Subic and Clark, or to the US Seventh Fleet base in Yokosuka and its 3rd Military Expeditionary Force base in Okinawa.

Carpio refers to China’s “nuclear-armed strategic bombers” to create an image in our minds of a fleet of warplanes with nuclear bombs in their bomb bays sitting on reclaimed island near us, ready to blast the Philippines back to the stone age, unless we acquiesced to that nation’s “imperialist” expansion.

But the bomber that landed on Woody island is only technically described by the US defense department as “nuclear capable,” not “nuclear armed.”  Even at the height of the Vietnam War, I don’t think the fleets of B-52s that regularly refueled at Clark Airbase were reported as ‘nuclear armed,” although they were certainly nuclear-capable.

But more importantly, Carpio didn’t explain that the Chinese planes landed on the biggest island of the Paracel group, which China has controlled since 1974, or 44 years ago, and which we aren’t claiming. That’s at the part of the South China sea farthest to us, and nearest China, where we have no business to be commenting on

Carpio confuses Filipinos
Carpio is trying to confuse Filipinos, to put in our minds the very wrong idea, which Vice President Robredo also had, that the Chinese planes landed on an island near our Pag-Asa island in the Spratlys.

If Carpio is convinced that there is militarization in the South China Sea threatening our sovereignty, he should also protest the regular patrols of the US Pacific Fleet, with its nuclear aircraft carriers and nuclear-armed submarines, in the South China Sea, ostensibly to ensure freedom of navigation.

Carpio is a vociferous anti-China partisan, and he has long concluded that China is out to conquer or at least control Southeast Asia – which has for decades been the US propaganda line.

While pretending to be a scholarly work with over 100, mostly medieval maps, the book from the start reveals its anti-China bias by which only facts that confirm its conclusion are presented.

Carpio himself reports how he got his views on China from former President Ramos security adviser Jose Almonte, one of the most pro-American Filipino officials I’ve ever met, permanently trapped in the Cold War era. Almonte, reputedly Ramos’ intellectual guru, was Carpio’s colleague in Malacañang when he was Ramos’ Chief Presidential Legal Counsel.

Carpio got it from Almonte
In his book’s Acknowledgments section Carpio wrote;

“Almonte, gave me a comprehensive overview of the geopolitics in the Asia-Pacific region. In the two decades since China seized Mischief Reef from the Philippines in 1995. Almonte has enlightened me, over monthly or bi-monthly dinners at his house, on the national security issues facing the Philippines from the time of the Vietnam War until the present and in the near future.

“In mid-2011, I asked Almonte which shoal or reef would China seize from the Philippines next. He immediately answered without any hesitation: Scarborough Shoal. I completely agreed with him for two reasons. First, Scarborough Shoal is essential for China to complete a triangle of airbases to impose an Air Defense Identification Zone (ADIZ) in the South China Sea. Second, an air and naval base in Scarborough Shoal will allow China to protect the Bashi Channel, which is China’s outlet to the Pacific for its nuclear-armed submarines. Such an air and naval base is a dagger pointed at Manila.

“My long-running conversations with Gen. Almonte made me decide to embark on an advocacy — to convince the Philippine government to question the validity of China’s nine-dash line before an UNCLOS tribunal.”

I would have expected a Supreme Court justice to get the views of others, especially experts and academicians on the complex topics of modern China and the South China Sea, other than this long-retired cold-warrior, on this important foreign policy issue confronting the country. But it seems he believed everything Almonte said.

Facts reveal Carpio’s undeniable bias here. Carpio says Almonte in 2011 claimed that Scarborough Shoal would be the next to be seized by the Philippines because of so and so, with a hifalutin ADIZ even mentioned to impress us.

As I have written in so many columns, it was because of President Benigno Aquino 3rd’s ineptness that we lost Scarborough or Panatag Shoal, by first arresting Chinese fishermen, then sending a warship BRP Gregorio del Pilar there, thereby militarizing the episode. Because of Sen. Antonio Trillanes 4th and Foreign Secretary Alberto del Rosario’s bungling involvement, Aquino withdrew all of our vessels, letting the Chinese occupy, and permanently hold on to, the shoal. Almonte predicted this would happen?

Can’t even mention Marcos
Carpio’s intellectual dishonesty is also demonstrated by the fact that he doesn’t explain at all how the Philippines got the Kalaayan group of islands in the early 1970s, which was because of President Marcos’ bold move to claim and occupy it — when China was in chaos during its so-called Great Proletarian Cultural Revolution.

In his 90,000-word book, Carpio devotes just one sentence to explain this very audacious move of Marcos, how we got to have any territory in the Spratlys, He’s s just like all Yellows, allergic to the word “Marcos” that he can’t even write it down: “Presidential Decree No. 1596 dated 11 June 1978 incorporated the Kalayaan Island Group into Philippine national territory ‘on legal, historical and equitable grounds’.”

Carpio’s melodramatic statement in a 2011 speech quoted in the book’s Preface reveals what is really on his mind: “This battle to defend our EEZ from China, the superpower in our region, is the 21st century equivalent of the battles that our forebears waged against Western and Eastern colonizers from the 16th to the 20th century.”

In Carpio’s paranoiac mind or one in which he seems himself as the counry’s modern hero, the Chinese are the modern equivalent of Spaniards colonizing us in the 16th century, Americans stealing our independence victories and occupying us at the turn of the century, and the Japanese invading us in 1942 – in all three cases killing hundreds of thousands of Filipinos. That is certainly a stretch: The world’s colonial and neocolonial era ceased at the end of World War II.

China of course claims the South China as its territory, and at the very least intends to be the dominant superpower in the region. It is an emerging economic superpower, and like all superpowers in modern history, it believes it has a right to create a sphere of influence surrounding it in order to protect itself, especially with its vast economy.

But it is preposterous to jump up and down to claim that it aims to turn us into its colony with the People’s Liberation Army occupying us.

We just have to be creative to maneuver our way to take advantage of China’s emergence as a superpower, but prevent it from turning us into its neocolony, as the US did in the past century.

Carpio’s intellectual dishonesty and hysteria are only intended to maintain us forever as America’s lackey and proxy in the region, especially as it doesn’t really have any business here, and its hegemonic power expected to diminish in this century.

Under Aquino, we’ve become the most violent country in Asia, next to NKorea

Communist negotiators have no control of the NPA. So what for the peace talks?

Moro conflict never was about religion, but over land