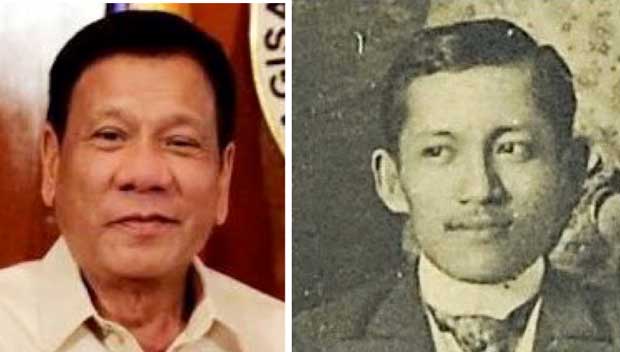 THE clerics and would-be champions of the Catholic Church who are having fits of apoplexy over President Duterte’s remarks about the Judeo-Christian deity in the Book of Genesis better control themselves.

In their harangue against Duterte for insulting their God, they are putting this President on the same level as our national hero Jose Rizal.

Rizal and now Duterte are the only Filipinos of national stature who did not mince words in attacking the Catholic Church, with our national hero in fact making a name for himself through his compelling and vivid novels against it, which inspired the Philippine Revolution against Spain. Duterte’s critics wouldn’t want that, would they?

Consider the column in this newspaper the other day (“Will excommunication and exorcism help?) of Duterte’s Torquemada, Francisco Tatad. In that kilometric piece with details nobody cares about, Tatad, because of Duterte’s blasphemy, “urges the appropriate ecclesiastical authorities…to study deeply and promptly and firmly act” on whether the President of the Republic should be excommunicated or — hold on to your rosaries — be exorcised.
What other well-known Filipino was threatened with excommunication?
Rizal, for his first novel Noli Me Tangere. Rizal himself disclosed this in his June 8, 1988 letter to one Protestant Pastor Karl Ullmer, who had become his friend during his stay in Heidelberg:

“I have left my country on account of my book. The Filipino public welcomed Noli Me Tangere very heartily; the edition is entirely exhausted. The Governor General summoned me and asked me for a copy of it. The friars were most excited. They wanted to persecute me, but they did not know how to get me. The Archbishop threatened to excommunicate me.”

Indeed, why wouldn’t the Catholic Church in the Philippines at the height of its power during the Spanish colonial period not want — as it succeeded in doing — Rizal not just to be excommunicated, but executed for writing two best-selling novels that not just exposed the abuses of its friars but also questioned Catholic dogma? After all, the Spanish Church had a tradition of executing thousands of “heretics,” by burning them at the stake after torture, condemned by its infamous Grand Inquisition organized by the Dominican Tomás de Torquemada.

Nobody remembers the name of any Spanish military man character in the Noli. Most Filipinos remember Padre Damaso (Verdolagas), the very hateful villain of Noli who fathered Maria Clara after raping her mother. Did the friars so hate Rizal because he was the first to put in words what probably was so well known during that period, that the friars were sex fiends?

Considering the total hold of the Church at that time on Filipinos’ minds, Duterte’s remarks about the Church and the God of the Genesis myth compared to Rizal’s novels are just harmless, friendly teasing during a round of drinks.

Rizal would be furious
If Rizal were reincarnated in our time and place, he would have thrown not p***ng inas of course but hijo de p***s and cabrones not just against the Catholic Church but the new religious swindlers calling themselves evangelists — or brazenly in the case of Apollo Quiboloy as the Anointed Son of God. He would be furious that more than a century after the Church got him killed, that same Church is still in control of most Filipinos’ minds, and is the pillar of an oligarchy-ruled society.

Rizal’s Noli Me Tangere and El Filibusterismo were very persuasive tracts against the Church — made more powerful, and popular, because they were in the form of unputdownable novels.

Don’t take it from me, but from the de facto head of the Catholic Church in the Philippines then, Cardinal Rufino Santos who issued in 1956 a “Statement of the Philippine Catholic Hierarchy on the Novels of Dr. Jose Rizal,” published in all broadsheets, that urged Congress not to pass a bill that required Rizal’s novels to be read in college. (The bill was passed as RA 1425 or the Rizal Law.) Just a small part of Santos’ lengthy letter reads:

“In these two novels we find passages against Catholic dogma and morals where repeated attacks are made against the Catholic religion in general, against the possibility of miracles, against the doctrine of Purgatory, against the Sacrament of Baptism, against Confession, Communion, Holy Mass, against the doctrine of Indulgences, Church prayers, the Catechism of Christian Doctrine, sermons, sacramentals and books of piety. There are even passages casting doubts on or covering with confusion God’s omnipotence, the existence of hell, the mystery of the Most Blessed Trinity, and the two natures of Christ.

“Similarly, we find passages which disparage divine worship, especially the veneration of images and relics, devotion to the Blessed Virgin and the Saints, the use of scapulars, cords and habits, the praying of rosaries, novenas, ejaculations and indulgenced prayers. Even vocal prayers are included, such as the Our Father, the Hail Mary, the Doxology, the Act of Contrition, and the Angelus, Mass ceremonies, baptismal and exequial rites, worship of the Cross, the use of holy water and candles, processions, bells and even the Sacred Sunday obligations do not escape scorn.”

How many Catholic beliefs did Duterte lambast? Just two by my count, the doctrine of original sin and the story that it was Eve who got Adam to eat the forbidden fruit.

The Spanish colonial government in fact cared little for Rizal’s novels. It was the Catholic Church in the Philippines, through the most militant clerical order of that period, the Dominicans, who asked for Rizal’s head.

Dominican pressure
They submitted a report to the governor-general on August 30, 1887 declaring: “The work Noli Me Tangere has been found heretical, impious and scandalous from the religious perspective, anti-patriotic and subversive from the political point of view, injurious to the Spanish government and its proceedings in the islands.” The Dominican pressure on the governor-general eventually led to Rizal’s execution by firing squad, on the trumped-up (and false) charges of his involvement in the secret revolutionary group, the Katipunan. (Have they ever apologised for framing up and having executed our national hero?)

Duterte is so very lucky he didn’t live during Rizal’s time, or that Tatad isn’t a high official in a dictatorship, or he’d be facing a firing squad by now.

Isn’t it ironic — or a case of poetic justice — that a nation still mesmerized by medieval Catholicism has for its national hero one who vehemently criticized that religion?

As Rizal’s novels inspired a nationalist Revolution, I hope Duterte’s words inspire a similar, but perhaps a subtle but more earth-shaking revolution — against the oligarchy that the Church has primarily served.

(For an explanation of why the Catholic Church’s hold not only on Filipinos minds but on the colonial government was so tight, even compared to that in Latin American countries, read my May 27, 2016 column, “Duterte’s anti-Church stance: It’s about time.”)

Sison’s Communist Party must be outlawed

Some smarter than others