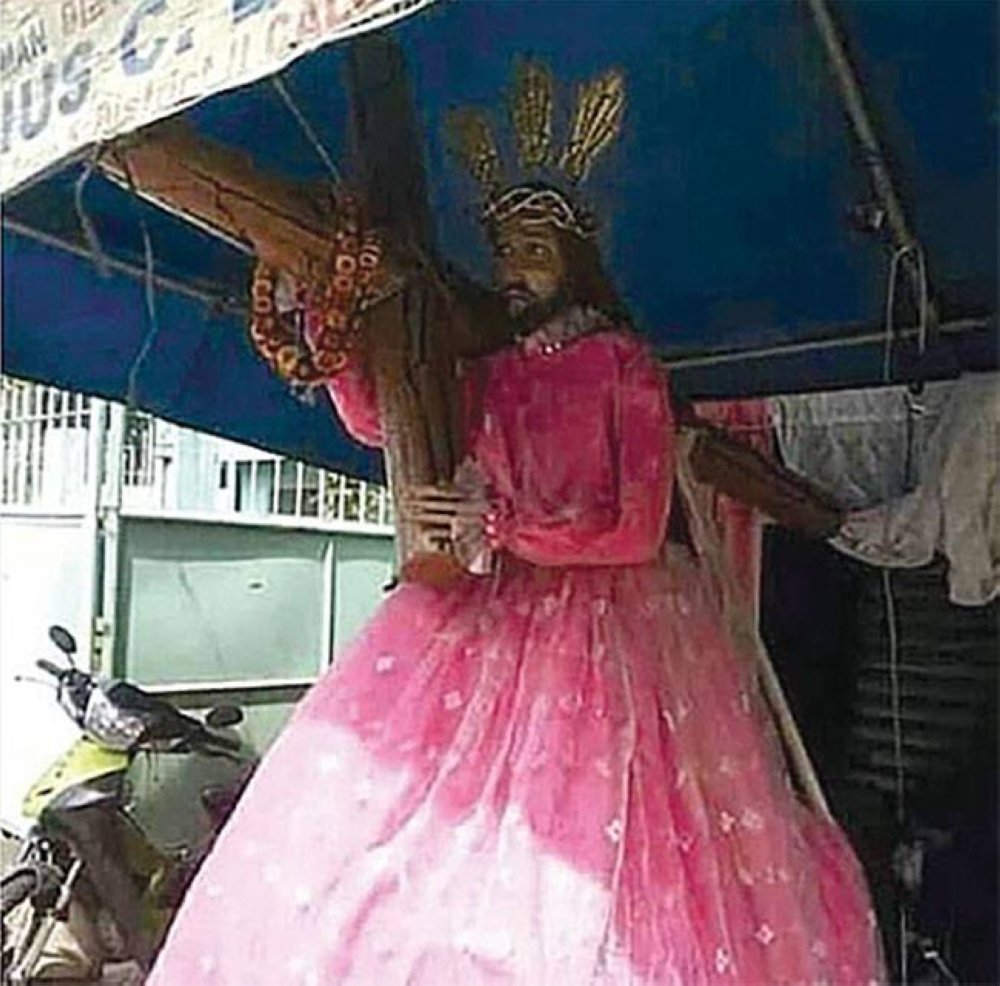 I HAVEN’T witnessed such depths of depravity, due to consuming political ambition, in exploiting Filipinos’ religious sentiments, as those demonstrated by presidential candidate Leni Robredo‘s camp during the just concluded Holy Week.

The Filipinos’ revered image, the Black Nazarene, normally clothed in majestic red, was dressed up in Robredo’s campaign color pink — to make the ridiculous implied claim that even Jesus Christ was supporting her.

One notoriously leftist priest had hosted an event in which the drape hanging on the cross was in Robredo Pink. This revered Catholic symbol during Holy Week is colored consecutively purple (on Palm Sunday, to signify Jesus’ alleged kingship), black (on Good Friday for His death), and white (on Easter Sunday for His resurrection). The symbolic palms that the priest blessed as part of the Palm Sunday ritual was even decorated with pink ribbons.

One of the worst Pink-concocted posers, displayed in Robredo’ s rallies was of the image of Mother Mary, her face replaced by the candidate’s grinning face, with the huge caption, “Hail Leni, Full of Grace, My Vote is with You.”

Why would Robredo’s activists do that? One is that they probably thought that the “stupid and fanatic” Christians that many Filipinos are, they’d be fooled that even the Christian God (or at least the Church) is endorsing Robredo for president. A second reason would be for them to convince themselves that Robredo is the divinely appointed and not just an ordinary candidate, and therefore no need to really scrutinize her qualifications.

Indeed, my suspicion is that most of the middle-class who support Robredo do so not because of a rational assessment of her qualifications but because of the following simplistic reasoning:

“Ferdinand Marcos Jr. is either the political reincarnation of the strongman Marcos or of Rodrigo Duterte, or both. The two strongmen are responsible for thousands of killings of the innocent, therefore I, bound by my Christian faith, against which killing is an offense, should vote for Robredo, who seems untainted with blood and who is the second contender for the presidency.”

That reasoning of course would be easily unraveled if such Christians bothered to do research on the validity of their premise — the killing of innocents — which however the oligarchs controlling mainstream media and the US-funded entities have brainwashed an entire generation to believe as true. I suggest they check out my many columns on these issues.

The Yellows’ (now Pinks) exploitation of the Christian religion for politics of course has become part of their political DNA since 1986 because of Jaime Cardinal Sin‘s — or whatever force manipulated him — brilliant maneuver. He went on radio calling the faithful (through Radio Veritas) on Feb. 22, 1986 to mass at EDSA in front of Camp Crame where the military mutineers led by then Defense Secretary Juan Ponce Enrile and the vice chief of staff had dug in as their last stand when their coup plot was discovered. He asked them to do so “to pray for the Virgin Mary to intercede and prevent violence.”

The less than metaphysical aim obviously was for the clerics and the civilians to become the human shields that Marcos’ troops would have to massacre to neutralize the mutineers at Crame. Word got around for the protesters to prominently carry with them rosaries and bring with them images of the Virgin Mary, and practically thrust these in front of the tanks and soldiers.

It was a masterly innovation on the pictures of the anti-Vietnam war protests in the US several years before where hippie-protesters inserted roses into the barrels of the National Guard’s guns.

Marcos indeed asked his Army to stand down, telling his generals, “I didn’t serve my country for decades just to end up killing my fellow Filipinos.” He concluded that the best way to prevent bloodshed was to evacuate to his home province, Ilocos Norte, and the Americans agreed to transport him. Upon Cory Aquino‘s demand though, he was brought to Hawaii.

What wasn’t widely known at the time, and I think up to this day, is the fact that the activist clerics were not really Sin’s followers.

One of the biggest achievements of the Communist Party of the Philippines at that time was the recruitment of many clerics into its Christians for National Liberation, who were mostly believers not really of the party’s god Mao Zedong but adherents of the so-called liberation theology that had become popular in Latin American dictatorships. Former priests who turned CPP leaders like Edicio de la Torre, the hearthrob among many nuns; the legendary Conrado Balweg legendary in the Cordilleras; and Visayas party leader Leoncio Evasco who would decades later be secretary of Rodrigo Duterte’s Cabinet.

It was the nationwide network of clerics that became the safe-houses of the communists and the NPA throughout martial law, and their international network a major source of party finances.

The communist clerics’ organization had drastically weakened as the communist insurgency lost its steam in the 1990s, especially after Duterte launched an all-out war against them. But it has still provided warm bodies in the communist protest movements, which always ally with the Yellow forces, trying to fool Filipinos, especially its youth, that fighting a democratic government is something Jesus Christ would do.

Pacquiao should have used his P50 million to buy vaccines

Did Roxas ask for Tacloban to be surrendered to him first?