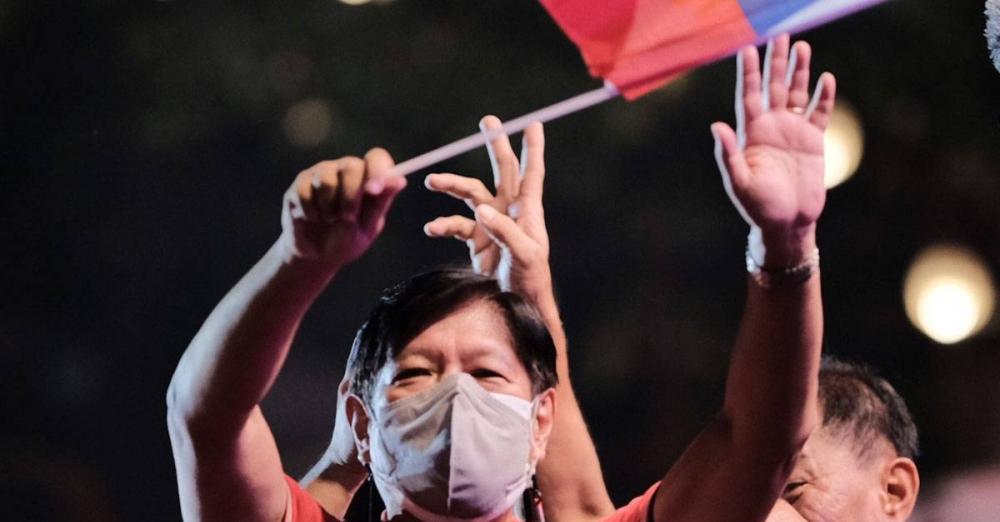 WHAT I find inspiring in the impending victory of Ferdinand “Bongbong” Marcos, Jr. (BBM) and his running mate Sara Duterte Carpio — as indicated by the BBM’s 64 percent preference in the most recent April polls by Laylo Research Strategies — is the following:

The Filipino masses have resisted American efforts to get their candidate Leni Robredo to grab power next month. They have seen through the lies and deception built up for 36 years since EDSA.

Look at Robredo’s statements, particularly with regard to our territorial and maritime-area disputes with China. She speaks for US interests, not ours. Even one of her most articulate supporters who had been raising money for Robredo and a founder of her “party,” 1Sambayanan, is Benigno Aquino 3rd’s Foreign Affairs secretary Albert del Rosario, the chief implementer of the past administration’s belligerent policy against China who begged for US military interference in the Scarborough Shoal stand-off.

Robredo’s main propaganda machine has been Rappler, now almost entirely dependent on funds from the National Endowment for Democracy (NED), funded by the US Congress which has been undertaking the agit-prop work the Central Intelligence Agency in the 1950s and 1960s had done.

Rappler’s CEO is Maria Ressa, an American whom her former employer, the ABS-CBN, forced to get Filipino citizenship as the Constitution bans foreigners in the management of media firms. The US even labored mightily to get Ressa the Nobel Prize, in order to enhance her credibility as a crusader against the “authoritarian” President Duterte.

Rappler is one of Facebook’s misnamed “fact checkers,” together with VERA Files, both of whom were given a special allocation in thousands of dollars by NED to be “fact-checkers.” How can these outfits be “fact-checkers” when they have consistently been biased, first against Duterte’s administration and then BBM’s candidacy? These fake fact-checkers were so enthusiastic in their real role of removing pro-BBM posts at FB that they removed the candidate’s spokesperson’s comments as well the Philippine National Agency’s news posts. Even I had been censured by Facebook because of these “fact-checkers,” with my posts limited for 90 days, i.e., until after the elections.

Because the polls last month showed BBM would win by a landslide, the Yellow rich had stopped funding Robredo’s campaign, except for the Yellow senator Sergio Osmeña 3rd, who in his hatred for Marcos, told the New York Times that he “had hired 10,000 volunteers to wage a counteroffensive against the Marcos campaign.”

Yet Robredo’s camp appears to still have funds, as it had managed to hire substantial warm bodies to attend its recent rallies, and to pay for singers and artists which attracted those crowds. The only source of funds would be an entity that has a huge stake in stopping a Marcos from being president: the US.

One US fear is that BBM might see his presidency as pay-back time. It was the US State Department that engineered his father’s fall. They gave Benigno Aquino Jr. a refuge in the US, and when the Philippines lurched into crisis because of the global debt crisis, sent — or prodded — him to return to Manila, to be assassinated, triggering a political crisis.

The US demanded a “snap election” in exchange for the IMF-World Bank financial rescue plan, helped the creation of a military mutineers’ group which bungled a coup d’état, and mobilized the best US PR firm to help Cory Aquino’s campaign.

Finally the Americans, upon Cory’s request, shanghaied him to Hawaii, when he had asked US assistance to vacate his home province, to avoid bloodshed. And even after his father’s fall, the US undertook a project for a kangaroo court in Hawaii to find him guilty of human rights abuses, which ordered practically all his assets to be turned over to the “victims” — actually mostly Communist Party and NPA rebels — as compensation.

I don’t think, though, that BBM is of the vengeful type like Cory and her son. Still though there is certainly no love lost between him and the US. Such antipathy toward the US on the part of BBM will likely prod him to adopt Duterte’s foreign policy of drawing closer to China, and treating the US as just one of the countries the Philippines is friendly with.

Such an independent stance on the part of the Philippines would be very worrying to the US, particularly at a time when tensions among the superpowers have arisen due to Russia’s invasion of Ukraine.

Aquino 3rd agreed to allow the US the kind of use-when-needed authority on five of its military camps. Bulgaria and Romania had similar “enhanced defense cooperation schemes,” from which in fact the Philippine EDCA was copied, and the Ukraine crisis has proven how valuable these arrangements have been. BBM can end the Philippine EDCA at his whim, as this was merely an executive agreement which was signed only by Aquino’s defense secretary and the US ambassador to the Philippines.

This episode again reveals the shameless lack of principles and political opportunism of the Communist Party and its organizations, which have given crucial help to Robredo by providing her rallies with the necessary warm bodies. Perhaps the CPP was paid hugely by Robredo’s camp to do so, but I cannot fathom why an organization which in its dogmas and program of action has condemned US imperialism as the country’s and the world’s scourge would be on the American camp in these elections.

I had expected, though, stronger moves from the Americans to get their candidate win. But just 10 days to elections, they’ve become inutile. I was told that the Ukraine crisis, and the months of preparing for it, has sapped all the US State Department’s personnel and finances. Practically all of the CIA operatives are in Eastern Europe now. Only the three stooges they have been funding for many years — Rappler, VERA Files and the Center for Media Freedom and Democracy — are here.

I’m getting to believe the thinking that to be president is a matter of fate, for everything to fall into its exact needed place at a precise time.