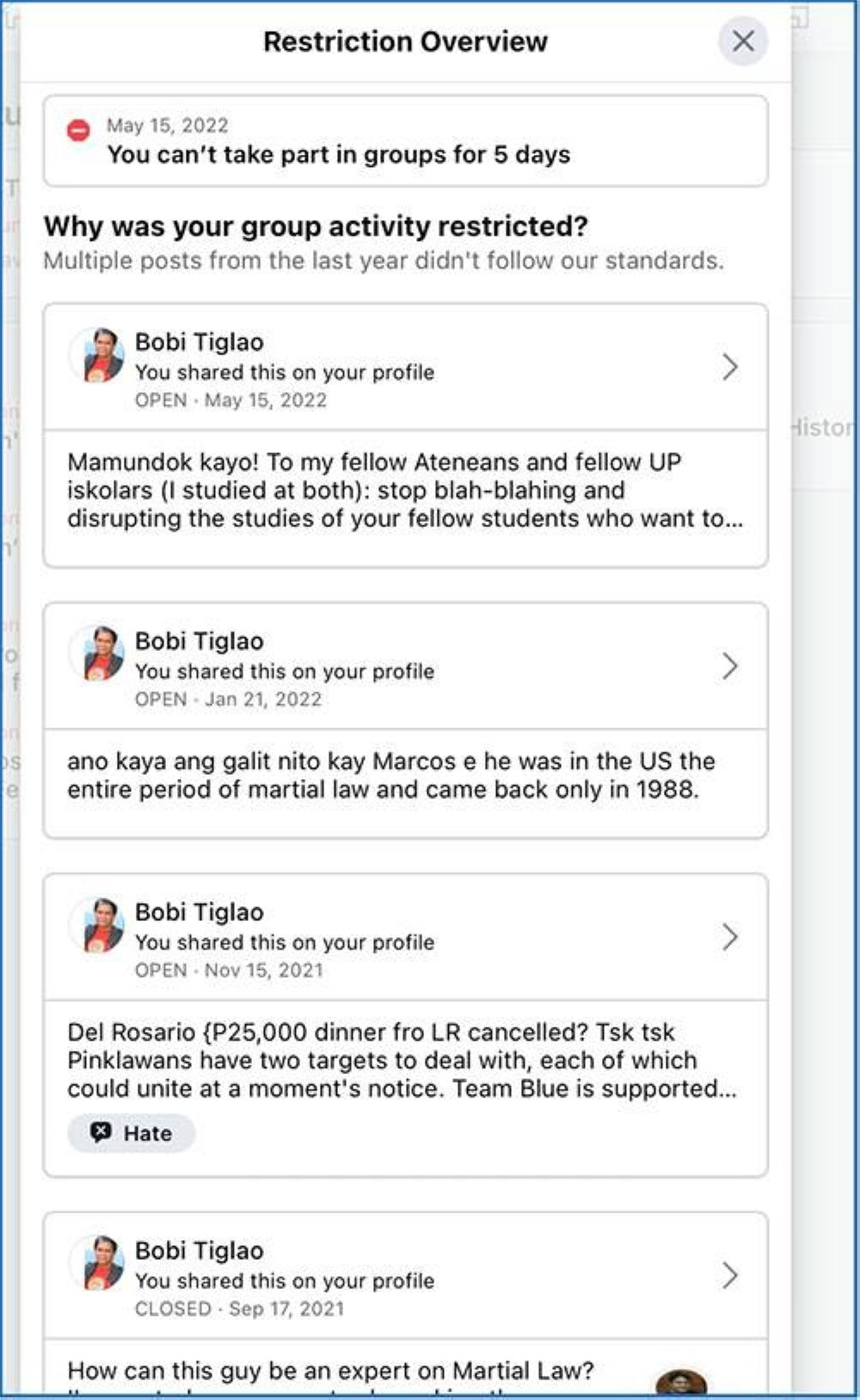 I’M convinced so, but you be the judge. I posted the following on May 15, which was promptly blocked by Facebook Philippines (reportedly headed by a Fink) and a “penalty” meted out that I can’t post anything, comment on anything for a week. “Your post didn’t follow community standards,” the notice said.

What? Warning the youth in universities what awaits them if they join the Communist Party or its New People’s Army? My post was as follows, which was admittedly angry after I read announcements that they would never go to class during a Marcos presidency.

To my fellow Ateneans and fellow UP “iskolars” (I studied at both): stop blah-blahing and disrupting the studies of your fellow students who want to get their degrees, not just for knowledge’s sake but, for the majority of “iskolars” who come from the lower classes, to uplift their families’ welfare. They are just afraid to protest the disruptions you have been creating.

Mamundok kayo at sumapi sa CPP/NPA, if you’re so angry at Ferdinand Marcos Jr.’s landslide victory. Get details from your schools’ Party members, who prance around the campus feeling as if they’re the only brave patriots on earth. As Sartre would have admonished you: Be authentic!

I did so when I was your age, when the elder Marcos won in 1969 by a bigger landslide (62 percent of votes as against his son’s 59 percent).

I learned the hard way though that the CPP/NPA was so evil and inhumane as to have undertaken the Plaza Miranda bombing, executed 3,000 of their own comrades in purges, and killed 50,000 of the Republic’s soldiers and police as well as civilians who refused to cooperate with them.

I was lucky enough though to be assigned from the Samar-Leyte boondocks to head the Manila-Rizal party organization. All the Ateneans I had a hand in recruiting to the Party — Ferdie Arceo, William Begg and Edgar Jopson — were killed in firefights with the military, partly since the Party armed them poorly.

I bet though after three days of no Facebook or Twitter (that’s reserved for commanders, as they need to coordinate with other squads and receive orders from Joma) and no Starbucks coffee (that’s reserved only for CPP political officers, to help them strategize how to kill more Filipinos), you’ll be back in the campus yelling, if you’re not killed first in some forgotten mountain.

That wasn’t the first time FB blocked me and suspended my participation in that social-media platform.

Earlier, on January 21, I posted a comment on Walden Bello’s post, wherein he claimed that if “Bongbong Marcos is elected president, this country will be torn by civil war.”

My comment: “Ano kaya ang matinding galit nito kay Marcos as he was in the US the entire period of martial law and came back to the Philippines only in 1986.”

I dare FB’s fact-checkers (who are mainly Rappler and VERA Files staff, for which “service” they have received a humongous tax-free P46 million from the National Endowment for Democracy from 2018 to 2021*) to challenge the veracity of this statement.

Another instance FB suspended me is nearly a smoking gun that proves Rappler all but controls Facebook Philippines.

I posted a link on my page to my Manila Times column entitled “Robredo camp to launch attack on Marcos in social media.” The FB restriction notice was that “independent fact checkers say information has no basis in fact.”

For its justification, it pointed to a Rappler report that claimed that “Meta” had denied the report in my column that candidate Leni Robredo had met with ranking officials of Facebook Philippines. This “denial” was faked by Rappler and Philippine Star, whose reporters cited an unsigned “email” purportedly by Meta. Neither Meta nor Facebook’s official websites had issued such a denial.

In the first place though, how could Rappler claim there was no such plan by the Robredo camp? Are they part of the Robredo camp, which however did not deny my report? My column though proved to be correct: the Robredo camp unleashed a torrent of anti-Marcos posts in social media in the few months before elections.

Still another instance of my suspension was when I posted in FB what was a follow-up to my column that former Foreign Affairs secretary Albert del Rosario, one of Robredo’s biggest supporters, was organizing a dinner that would cost P25,000 per head with the meal to be delivered to the donor’s home (as it was during the height of the pandemic). I posted the information I had received later (which was not denied by del Rosario) that the dinner had been canceled, as it was largely ignored even by Robredo’s rich supporters. I posted this on my FB page.

What was the FB’s reason for suspending me? “Your post didn’t follow community standards on hate speech.”

I think it is obvious enough that FB has been controlled both by the Reds and the Finks, although they of course are careful not to make it obvious. They’ve targeted me, suspending me for the flimsiest reasons, to force me to post only things, well like inspiring quotes of some famous figure or how good a restaurant my family recently dined in. I will not be cowed: F**k Facebook!

Why do we allow these US-funded bogus fact-checkers to censor us?

The Marcos camp must find ways and means to call FB to task about this, or it will be a powerful platform to badger its administration.

And to think the main reason foreign media has been giving to explain Marcos’ victory is that his camp had succeeded in spreading disinformation in social media. That’s just not true, as is obvious in my case and if one just browsed FB and Twitter the past months, which shows the same level of postings by the two camps. Furthermore, the bulk of social media readers are from the younger age groups. Surveys show though that support for Marcos is almost uniformly distributed among all age cohorts.

Generals should shut up on international disputes