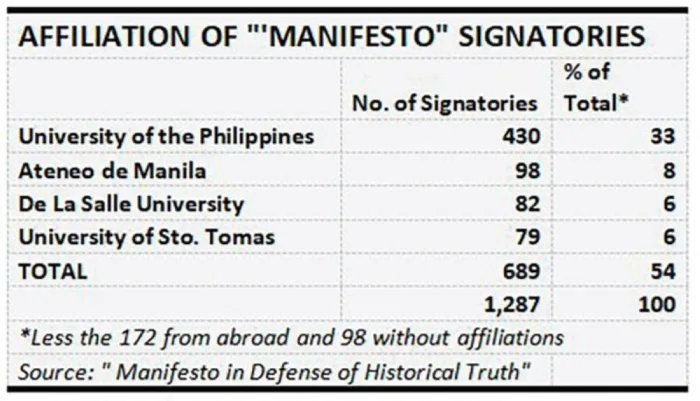 WHAT the bad news that the unscholarly, tasteless “Manifesto in Defense of Historical Truth” issued by over 1,000 dubious scholars reveals is that the Communist Party of the Philippines has taken deep roots in four of our top universities as to make many of their academics —and their students — think as the Reds do.

Call it red-tagging, I don’t care, but I was once a Red, a ranking Red, and I know how such a ferocious, anti-Marcos viewpoint is a paramount dogma in the CPP, and how this has emerged in these universities. “Anti-Marcosism” has been at the core of the Communist Party’s frame of mind and only the academics who were once Reds — and not flaky-minded Yellows — have the mental resources to make such thinking a dogma, and sustain it through four decades.

The “scholars” manifesto claims that the “history” of martial law cannot be changed. That is total hogwash no real scholar would ever assert: “History,” just like all sciences, is revised as new materials are unearthed, brainwashed, state-captured minds are liberated, and new better paradigms are adopted.

The term “historical revisionism” was given a pejorative meaning in fact by the Maoists, here and in China, when they termed as “revisionist” the Soviet Communist Party, led by Nikita Krushchev, condemning starting in 1956 its former head Joseph Stalin’s atrocities and reign of terror. A plethora of historical studies of course have proven the Maoists wrong, yet they still worship Stalin, whose regime has been estimated to be responsible for 6 million people in the Soviet Union being killed.

That those dubious scholars and most anti-Marcosists brand as “revisionist” those narrating after rigorous research what really happened during real martial law reveals the Red hand behind their thinking.

The fact that these four universities are Red ideological bases will be a huge problem for the new Marcos administration, as they are the source of biased, incompetent media men, of warm bodies in demonstrations, and manifestos. What the Reds lost in the battlefields in 40 years, they have gained in propaganda power through the universities.

To realize the gravity of the nation’s problem, can you imagine the kind of discourse there would be in the US if Harvard, Yale, Stanford and MIT were controlled by the Communist Party of the US, or if academics sympathetic to the 1970s Weathermen or the Black Panthers were in top positions there? Can you imagine if the Harvard Crimson were to mostly have, as the Philippine Collegian does, pro-communist articles?

The good news though is that such Red control is limited only to the four universities: UP, Ateneo, De La Salle and UST. Out of the 1,385 signatories to that unscholarly manifesto — excluding those based abroad or are foreigners — 54 percent are just from the four universities. In fact, UP accounts for a third while the share of the other three is just 6 to 8 percent.

This indicates that the Red infection basically has spread from UP but to only three other universities. I have explained in several columns how UP got to be so infected with the Red virus, among them: “How communists gained control of UP Student Council, Philippine Collegian and most campus organizations,” “How the Maoist CPP conquered UP,” and “Shameless prostitution of academe: The Communist Party’s martial law course at UP.”

Just get a copy of the Philippine Collegian: It’s redder than the Communist Party newspaper Ang Bayan, and devotes most of its pages to attacking government, romanticizing the NPA and party founder Jose Ma. Sison, rather than dealing with university and student concerns.

I have been wondering why the CPP no longer has that “Revolutionary School of Mao Zedong Thought” that was directly under the Politburo in the 1970s where I imagined where I would teach. Now I know: It is the UP that has practically become that school.

There is a strong party group (the party cell in operational command of an organization) in the UP and you’d be surprised who its five members are. Only recently they called for the “isolation” of Prof. Clarita Carlos, and for the political science department to declare her a pariah — because she has been balanced in her discussions about the new President Marcos.

The good news I extracted from data on signatories to that manifesto is that the Red infection hasn’t really spread to the other 2,396 universities and colleges (the technical name for them are higher education institutions, or HEIs.) The total 1,385 “scholars” of a Red or anti-Marcos persuasion is a minuscule 1 percent of the 137,318 faculty in these HEIs in the country.

In fact the signatories are from only 52 Philippine HEIs, even a bit less than the 56 from foreign universities. While the UP has still the biggest enrollment among state HEIs with 57,000 enrollment (2020 data), there are other HEIs rivaling UP’s size, in which communist party influence has drastically weakened or is totally nonexistent, among them: the University of the East (which has the country’s biggest student population of 57,000), Far Eastern University, Cavite State University, Batangas State University, Cebu Technological University and Bulacan State University.

What happened at Polytechnic University of the Philippines (formerly Philippine College of Commerce) would be useful. It is the biggest state university with enrollment of 58,000, slightly bigger than UP. It used to be “more communist” than UP. However, party influence there appears to have weakened, and it has the smallest number of signatories to the communist-led manifesto among the four which has the biggest. What I find puzzling, and which I cannot explain, is how UST has become so Red-infiltrated. In my time, it had the most conservative, religious faculty.

The nation cannot simply ignore the fact that four of our biggest universities have serious Red infiltration, in which the faculty and communist activists there continue to fool young people to devote their lives fighting the government, only to die in some godforsaken jungle.

Our neighbors went through a similar scourge of certain universities becoming Red cultural bases, among them Thailand’s Thammasat University and South Korea’s Seoul National University in the 1970s. Both were brutally crushed, however, paving the way for these countries’ stability that led to their economic growth.

Marcos, despite the Left’s claims of ruthlessness, wasn’t brutal enough it seems.

Communist cadres released from prison or losing their balls to go back to the mountains, simply returned to the UP as instructors, professors and researchers in various departments there. Would you believe, the late Monico Atienza, organization department head of the CPP in the 1970s and No. 3 in its pecking order was a lowly Filipino instructor in the 1990s, or that Bienvenido Lumbera, who even got to be awarded as National Artist, was deputy head of the party’s cultural bureau for two decades, and the UP Party Group? A UP professor fond of telling media she was just a student activist when Marcos’ military arrested and tortured her never discloses that she was one of the first feared NPA “amazons” who then joined the organizing committee for the National Democratic Front.

Avowed Marxist Francisco Nemenzo was UP’s president from 1999 to 2005, a chancellor of UP Visayas, UP Faculty Regent, and dean of the College of Arts and Sciences of UP Diliman. Nemenzo was Sison’s competitor for promotion to the Central Committee of the old Soviet-controlled Partido Komunista ng Pilipinas. Although his party had disavowed armed struggle and signed a peace pact with the Marcos, Nemenzo certainly made the UP a haven and refuge for Maoist intellectuals — and cadres.

This new administration should undertake two approaches for dismantling our institutions of higher learning from becoming recruiters for the NPA and churning out Leftist media workers disseminating irrational anti-Marcosism.

These are, first, to continue and enhance the tremendous work of the National Task Force to End Local Communist Armed Conflict (NTF-Elcac) in exposing and opposing Red infiltration at UP and other universities. Its leading officials, National Security Adviser Hermogenes Esperon Jr., retired general Antonio Parlade, and its spokesman and very active official Lorraine Badoy are the nation’s heroes for boldly and openly going against the Reds. President Marcos should let them continue with their jobs, and give them more resources to pursue their task to the end.

Second, whoever would be the head of the Commission on Higher Education should be given the marching orders to clean up UP of its Red infection, and undertake a massive information campaign in HEIs on the reality that we cannot really advance as a nation, politically and economically, if the CPP and its NPA aren’t crushed.

The seldom discussed, but one of the most important lessons of our neighbors that have become more advanced than us (Singapore, Malaysia, Thailand, South Korea and Indonesia) is the absolute need to totally end the communist insurgency if a nation is to develop economically and politically.

Why do we allow a private army, controlled by an octogenarian living a comfortable, even a debauched life in Utrecht, to continue killing our men in uniform? To date, and based on the military and police records, the CPP-NPA is responsible for the deaths of 50,000 of our uniformed men, and most probably the same number of civilians.

President Duterte has drastically weakened the CPP-NPA; it is Marcos’ duty to the nation — and to his father — to finish it off.

Where to? Marcos should learn from his father

Jesus: A failed rebel, a myth or a Roman invention?