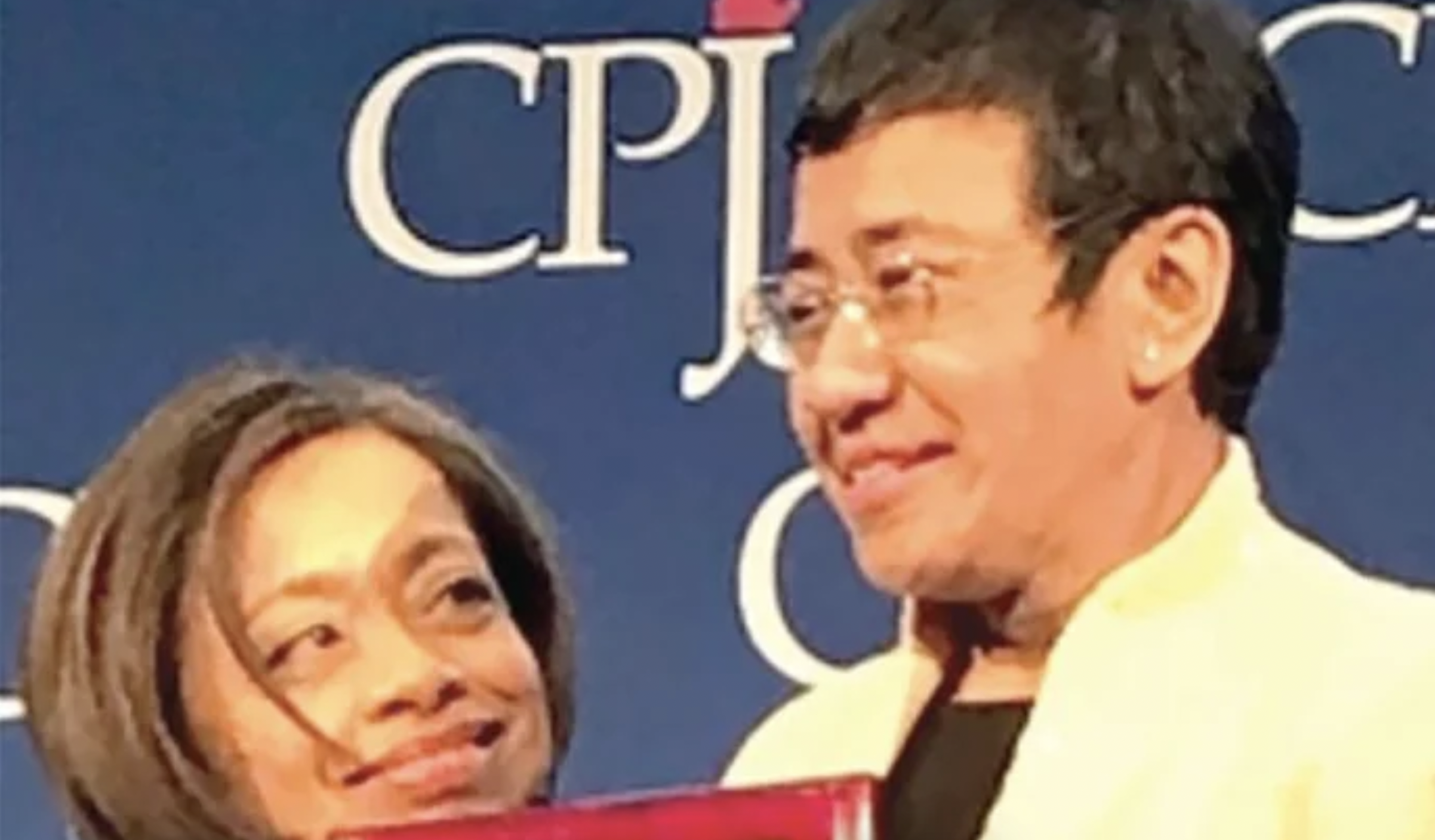 And what did she repeat again and again? “Marcos won because of massive misinformation in social media,” an accusation she has only the flimsiest basis for claiming. Both sides — in fact all national-level candidates — of course had their campaigns in this new media, but records show Robredo even spent the most.

While there was absolutely no basis for Ressa’s accusation, the foreign media swallowed it hook, line and sinker, and nearly all foreign accounts of the recent elections now use that line. An article in the Columbia Journalism Review, which claims to be the leader in press criticism, even sarcastically headlined “TikTok and the son of Ferdinand Marcos take the Philippines back to the future,” with an unflattering, mischievous photo of Bongbong even. Sheila Coronel most likely behind that article as she is with the board of that bi-annual publication.

Did this journal — which calls itself “the voice of journalism” — investigate if indeed it was social media that won the presidency for Bongbong? Or course not. And this is how Ressa, Coronel and those US-based critics of the country get to spread their lies.

A fellow columnist who is an international banker was asked how Bongbong’s victory would affect global banks’ investment decisions for the Philippines. He replied: “Sorry to say this, but they just don’t care. We are just too small, a rounding error.”

Indeed I realized this when I worked at the Asian-wide Far Eastern Economic Review. Editors in US publications wouldn’t spend a penny worth of resources to check on a fact about the Philippines (or similar countries really unimportant to them) written by a reporter. It’s too small to care about. If it was about India or Indonesia, maybe they would.

Foreign media have acted that way toward Ressa’s claims. For instance, she claimed that she was charged with cyberlibel for an article written before the law on that was passed, and that the article merely corrected a typo.

That is total bullshit, and foreign media didn’t bother to check the court decision on that matter: It ruled that yes, it was first published before the law was passed, but Rappler didn’t take the article down after it was enacted, even after the offended party begged Rappler’s original owners to take it down. The court ruled that being continually posted in its website, it is as if the libelous article was just recently. posted. The typo error had nothing to do with the libel accusation. It was Ressa’s smart propaganda trick to make the charge seem to be merely harassment by Duterte.

Neither Ressa, Coronel nor any foreign media reporting or commenting on the elections discuss, much less debunk, the three major, obvious, indubitable, incontestable factors that got Bongbong 59 percent of the votes, with Robredo getting about half of that, 28 percent:

– It was a vote for Bongbong’s father, with many Filipinos rejecting his demonization by the Yellows through 36 years. The claim that young Filipinos had not lived through martial law is hogwash: voters for Bongbong were distributed among all age groups, including those who were adults during the elder Marcos years.

– It was a vote for Duterte — not just because Bongbong’s running mate was his daughter Sara but because he is his unannounced political heir — who despite the nonstop attacks against him by the likes of Ressa and Coronel, was ending his term with the highest 75 percent approval ratings ever reached by a president.

Worse than Ressa’s disgraceful harangue against our election though is Coronel’s article in the prestigious New Yorker, for which she even got, if it paid her its usual rates, $7,500. The title itself is so erroneous; there was no social-media mythmaking undertaken by the Marcos camp, and the piece itself had not a single word on how “it could be a warning to the US.” It is the worst piece of purported journalistic work on this election. Read it, and you won’t have any doubt that Coronel seems to have taken on a new career, or maybe sideline: Ressa’s PR.

The piece is in Coronel’s usual style of 1980s “new journalism,” of giving details we don’t need but intended to lull one’s rationality to be taken over by sheer emotions. An example: “In Rappler newsroom, stalks of takeout food in plastic boxes — pork tonkatsu, butter chicken, shrimp tempura — had been ordered. “

Coronel’s piece actually explains little how Marcos won. It is mainly an unabashed paean to Ressa as if they had a special relationship and a glorification of Rappler, with such sickening praises for its staff as “they’ve given their heart and soul” and when Marcos was winning, “it felt like I was being stabbed [an editor said],” “members of the social media team were in tears.” This garbage written by the director of the Stabile Center for Investigative Journalism at Columbia University? No wonder US journalism has gone to the dogs, with the New York Post now being the most read newspaper in the country.

I say it is such a shit piece of journalism, as it dishonestly diabolically hides the truth from New Yorker readers: Coronel makes it appear as if Rappler is a major news operation when it is not, and in surveys even ranks as among the least trusted news source. I would bet even New Yorker readers would raise their eyebrows if Coronel disclosed a detail about Rappler, that it is funded by the CIA-linked National Endowment for Democracy. Of course she didn’t.

Coronel didn’t even make the important disclosure that the Media Development Investment Fund (financed by other American “pro-democracy” NGOs), of which she is the chairman, had invested $2 million in Rappler.

Coronel devotes so much words on these self-important, self-righteous people in Rappler and its operation, to write on the historic, seismic event that was the May 2022 elections. It is as if an article was published in the New Yorker narrating goings-on in 2020 in the far-right website Breitbart managed by Trump’s former chief justice, as the counting showed Biden winning against Trump.

A responsible journalist would have related how folks in their salas in towns in the North and the South had jumped with joy when Marcos and Sara obviously were irreversibly winning.

Coronel quoted a Rappler editor: “If, in a Duterte presidency, the main issue was human rights, in a Marcos presidency it would be truth.” But it is Rappler which has been routinely killing truth in their reportage — among others, that Chief Justice Corona’s cheated in getting his PhD, its exaggerated casualties in the anti-drug war, a businessman’s alleged involvement in a murder (for which it was libeled) and Ressa’s own stupid article on IS involvement in the Resorts World attack. It even has killed truth by ignoring that its existence violates truth since it is foreign-funded, which the Constitution bans for media firms. I have proved these in many columns, and it has never debunked my allegations.

Coronel on the other hand should move on, as she has lost touch with Philippine reality. She has been in New York for 16 years at Columbia University, but seems incapable of writing anything about the US, and there is no death of issues there needing her fine investigative skills — the Trump presidency, police incompetence and bias against blacks, the National Rifle Association’s culpability in mass shootings. Is she afraid she would be called to task, or even lose her green-card, if she hits US institutions, as much as she has lambasted Duterte and now Bongbong?

If a foreign correspondent can write only about his or her own country when he or she has already been deployed in another country, she’s usually fired. Coronel should ask Ressa what happened when CNN deployed her to Indonesia.

I can only gnash my teeth over how US media, and people like Coronel and Ressa, had ganged up and threw piles of dirt against Duterte, how they refuse to acknowledge when their accusations have been proven wrong, and how they will do exactly the same against Bongbong, all the while blabbering that they are holding the line for truth. If our country goes down in chaos, these two will just be having coffee in some New York coffee shop gossiping. I can only express my frustration in my own language, borrowing from Coronel’s passé new-journalism style: Grabe ito, Kawawa naman tayo, aping-api ang bayan natin ng dalawang ito.

*A naturalized US citizen in her youth, Ressa took up dual Filipino citizenship only when ABS-CBN’s legal section said it was required when she was recruited as manager there in 2004. Ressa’s official residence is in Monroe, New York, based on her New York voter registration data. (She last voted, as an absentee voter, in November 2016 at the US Embassy in Manila.) Coronel lives in New York with a green card, I presume, having joined the faculty of Columbia University 16 years ago.