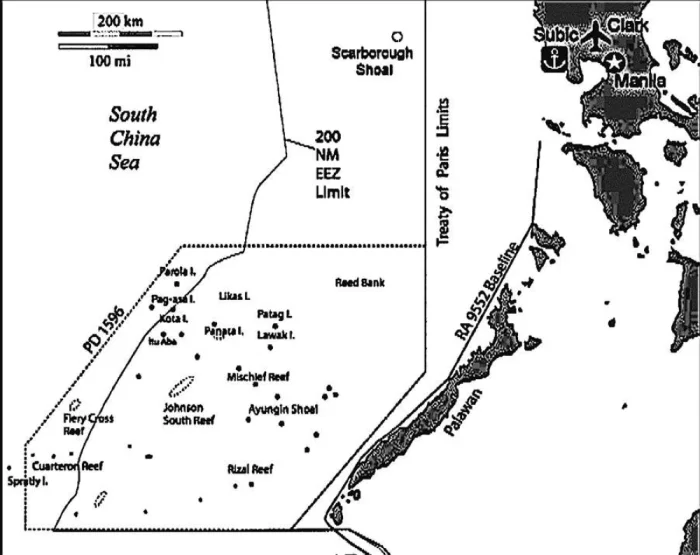 Six years after that dubious arbitration panel handed down its ruling, most countries in the world — excluding, of course, the US and its vassal nations — have ignored it. This is because several of the rulings would also be adverse to them (e.g. its strict definition of an “island,” or the entire idea of a non-voluntary arbitration has proven to be totally absurd).

For BBM, what should be obnoxious to him regarding the ruling is that one of its provisions throws to the dustbin one of his father’s most important legacies to the nation — his creation of the Kalayaan Island Group (KIG) in 1978.

The KIG, in fact, has been the only addition to our territory since the 1898 Treaty of Paris (the “sale” document between Spain and the US) established the archipelago’s boundaries.

BBM’s father, Ferdinand E. Marcos Sr., through Presidential Decree 1596 in 1978, boldly annexed that hexagonal area and called it the Kalayaan Island Group (KIG). It encompasses a huge area, the Spratly islands, and includes many small islands and over 100 tiny reefs, and the waters in it. China and Vietnam had claimed the entire Spratly Islands several decades earlier.

It was a brilliant move by Marcos, owing to his firm grasp of the geopolitical situation at that time: the US relied on its military bases in Subic and Clark for its wars in Indochina and to contain China, which at that time was just coming out of the chaos of the Cultural Revolution, that it hardly had ships to go to the Spratlys. Vietnam was still recovering from its civil war that ended in 1975. He also calculated that China would look the other way as a result of the amiable relationships he established when he and Imelda met with Mao Zedong himself and Premier Zhou Enlai during their state visit to Beijing in 1975.

With the US covering Marcos’ back what with its military bases here, China and Vietnam — the two major claimants of territory in the South China Sea — could not stop Marcos’ move to annex a huge part of the Spratly islands.

There are indications that Marcos planned to annex it as early as the 1970s, when he issued authorizations to a Filipino-Swedish, as well as US exploration firms, to explore for oil and gas in the Reed Bank in the northeastern part of the Spratlys which, at that time, was outside our territory, as defined by the Treaty of Paris. The global treaty for an exclusive economic zone (EEZ), roughly 200 nautical miles from a country’s sea coast — would be signed and in effect only in 1982.

Marcos, however, apparently thought that if he moved to annex the KIG in the 1970s, the Liberal Party and Benigno Aquino Jr. would have sabotaged his move one way or another, since this would raise his prestige. This indeed happened when Aquino torpedoed his intention to annex Sabah forcibly, by inventing allegations of a “Jabidah Massacre,” which alerted the Malaysians to his plans. With his one-man rule declared in 1972, there were no obstacles to his annexation of a huge part of the Spratlys. Without martial law, we would not have had the KIG.

In his decree, Marcos claimed these areas “do not legally belong to any state or nation but, by reason of history, indispensable need, and effective occupation and control, established in accordance with international law, such areas must now be deemed to belong and subject to the sovereignty of the Philippines.” He ordered the KIG to become a municipality of Palawan island. Republic Act 2009, or the so-called “Baselines Law,” reaffirmed Marcos’ move, and declared that the Philippines “exercises sovereignty and jurisdiction” over the KIG, and described it as a “regime of islands,” consistent with Article 121 of the United Nations Convention on the Law of the Sea (Unclos).

The US and many other nations, however, have not officially recognized the KIG as part of Philippine territory, since China, Vietnam, Taiwan and Malaysia, in part, also claim it. China and Vietnam had passed laws categorically claiming it as part of their territories, archipelago Nánshā Qúndǎo for the former and Quần đảo Trường Sa for the latter. Malaysia occupied an island and several reefs from 1983 to 1999 on the ground that these were within its EEZ.

The past Yellow regime, doing the US bidding to demonize China through the arbitration suit, lost all sense of nationalism that they were so willing to give up the KIG. As a result, one of the arbitral tribunal’s rulings claims Marcos’ annexation of what he called the KIG is illegal, and therefore should no longer be recognized.

Paragraph 574 of the arbitral ruling pointed out that “the Philippines could not declare archipelagic baselines surrounding the Spratly Islands.” It explained: “Article 47 of the Convention [On the Law of the Seas, or Unclos) limits the use of archipelagic baselines to circumstances where ‘within such baselines are included the main islands and an area in which the ratio of the area of the water to the area of the land, including atolls, is between 1 to 1 and 9 to 1.” And paragraph 599: “The ratio of water to land in the Spratly Islands would greatly exceed 9:1 under any conceivable system of baselines. Indeed, 98 percent of the Spratlys is made up of water.”

According to the arbitration ruling, a nation can only claim sovereignty over individual islands and reefs, not the entire area that contains those islands and reefs — which the KIG is, as well as many archipelagos in the Pacific.

Five of the reefs in the Spratlys occupied by China, but which we claim to own, are not within our EEZ but are part of the KIG: Fiery Cross (Kagitingan), Subi (Zamora), McKeenan, Johnson (Mabini) and Cuarteron (Calderon). The tribunal ruling means that we should stop claiming this, as the KIG has no legal basis.

It was really traitorous for the Aquino regime — through its American lawyers — to ask the arbitral panel to rule as illegal its own country’s territory, KIG. The tribunal obliged them.

Aquino’s lawyers lied to the arbitration panel that the Marcos decree had been repealed. In the panel’s hearing on July 7, 2015, one of its members, Rudiger Wolfrum, interpellated one Aquino lawyer, Philippe Sands, on whether he is aware of what “Presidential Decree (PD) 1596 of the Philippines ” means in terms of the dispute.

Sands replied: “Under Philippine law, as a treaty lawfully entered into by the Philippines, Unclos is part of internal law, and it has the same status as national legislation. And that means, to the extent that PD 1956 might be inconsistent with Unclos, PD 1956 is to be treated as having been effectively repealed by the Philippines’ subsequent ratification of Unclos, under the principle of ‘ex posteriori derogat priori,’ which means that a ‘new statute takes away the effect of a prior one.'”

That argument is flawed legally and in practice: the later statute must either expressly repeal, or be manifestly repugnant, to the earlier. The country’s accession to the Unclos treaty did not expressly repeal PD 1596. The 2009 Baselines Law called the KIG a “regime of islands,” and did not repeal PD 1596 that set it up.

In fact, the Supreme Court in a Jan. 21, 2020 decision (GR 1708687, Palawan v. Republic of the Philippines) on the case did not assert that the PD 1596 has been repealed, and invoked it as one of the laws defining Palawan province’s territory, which includes the municipality of Kalayaan.

BBM should not lose sight of the real reason for the arbitration suit. It was a scheme by the US to demonize China by portraying but not really proving that its claims in the South China Sea are without basis, to force it to move totally out of that sea, so that there would only be one hegemon — the US — in Southeast Asia. The US also wanted the KIG declared illegal and the islands and reefs there occupied by China and Vietnam as not entitled to EEZs so that the area would be indisputably international waters, and therefore its warships, even those nuclear-armed, won’t need these nations’ permission to pass through.

The arbitration suit was intended to expand the US’ freedom of navigation area for its warships’ patrols in the South China, so it could continue to project its power and contain the emerging superpower in the region, China. Aquino and his Foreign secretary Albert del Rosario, who pursued the suit were simply the Americans’ stooges.

What the father created, the son agreed to dismantle. I’m very sure BBM wouldn’t like to be known for that.

*Debacle is available for purchase online at rigobertotiglao.com/debacle, at Popular Book Store, and at amazon.com (print and Kindle versions).

How low can they get?

Reviving nationalism: The only way for us to grow out of our Third-World status