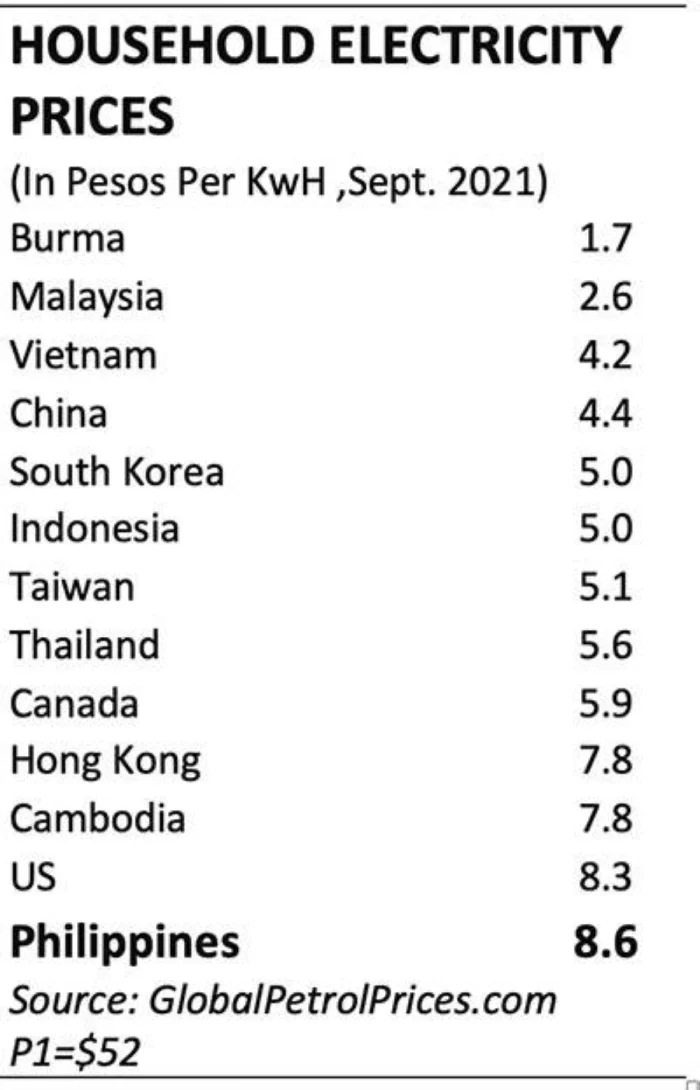 About 45 minutes later, power in our house was restored, and I was relieved as I was in the middle of writing the first draft of my column for today. It turned out that was just the start of my nightmare.

Right after I stashed away the candles I had lit, the power went out again. Would you believe, this power-on, power-off episodes happened several times? I asked my daughter who lives in the same street to ask the Meralco crew whom she had contacted for the repair. They said they would be coming back to “double-check” what was wrong as they had already restored power.

Now here’s the worst part of this nightmare. After an hour, power — some — was restored. But then the lights in my house (as well as in other houses in the area) were blinking as if they were disco lights. Two of my refs went off and on several times, as did my TV.

Apparently, those jerks didn’t get to restore the normal 220-volts power, or the kilowatts needed, or whatever the normal power needed by a household is called. All of the lighting in my home, as it is in most homes now, are LED lights, or the “light emitting diodes.” They’re very energy efficient, but they have one problem, it seems: they have a very narrow band of power voltage to operate. If power goes below that, they blink or turn off.

Power on, power off. I didn’t know it at that time, but I was told later that this happens if power delivered from the grid is unsteady or fluctuates way below the total required in a household. Refs and TVs get the power they need, until a point when their total requirements — which fluctuates — fall below what is being delivered by the grid, and so power is totally shut off.

Worse, such power fluctuations, especially the surge in electricity when it comes in, can easily damage the high-tech LED TVs now. Fortunately, my TV sets survived these Meralco incompetence — but not my beloved hi-tech Delonghi coffee maker. Don’t I have the right to claim damages, or at least a brand-new Delonghi from Meralco?

The minutes were turning into hours, that I decided to endure the darkness with some candles, rather than hoping the blinking would stop, that power would be completely restored.

After several double shots of Glenfiddich in the dark though, I was getting more and more angry at Meralco. It wasn’t just the situation that it got me into, in effect immobilizing me to do anything, but the knowledge of several things about Meralco that shame our nation:

1. For a public utility, a strategic one supplying that crucial commodity, electricity, for the political and economic center of our country, and a monopoly at that, Meralco’s ownership structure is an abomination to our nation. Some 45.5 percent of it is owned by Hong Kong-based First Pacific, which in turn is 45.5-percent owned by the Indonesian tycoon Anthoni Salim, and the rest widely held by US and European investors. Manuel V. Pangilinan owns only about 2 percent, and is in essence Salim’s highly paid manager, despite his very successful PR portraying him as the major owner of the “MVP Group.” The John Gokongwei J.G. Summit owns 29.6 percent. Salim got to take over Meralco in 2012, mostly using the employee benefit funds of another utility firm he got control of through President Estrada’s largesse, PLDT.*

2. We are the only country in Asia which has allowed the crucial power sector to be dominated by private conglomerates, worse by a foreigner.

3. We have the most expensive electricity rates for households in Asia, with our Meralco’s average P8.6 (as of September 2021) double that of the war-ravaged Vietnam’s P4.2. The only explanation for that is that Meralco’s monopoly allows it to impose such high prices.

4. Ownership of an electricity distribution firm is expressly limited to 40 percent by the Constitution. Yet Salim has been able to evade this constitutional rule, because of certain rulings solely by the Securities and Exchange Commission — all of which of can be reversed overnight by that institution’s commission to conform with the Constitution.

5. Because of its monopoly, and because it scrimps on expenses for efficient services – which explains my suffering the other night — Meralco has been an extremely profitable company, earning about P20 billion annually, or P200 billion since 2012. With its 45.5 percent ownership of Meralco, First Pacific therefore has accumulated profits of $2 billion in the past 10 years, $900 million going straight to Salim’s bank accounts.

It was incoming President Ferdinand “Bongbong” Marcos Jr.’s’ father who wrested control of Meralco from the oligarch clan the Lopezes in 1973 when he got them to sell the power firm for P150 million.

Then Defense secretary Juan Ponce Enrile testified in congressional hearings in 2002 that he had two letters from clan patriarch Eugenio Lopez asking the Marcos government to buy it, as it was facing imminent bankruptcy. However, Oscar Lopez, the chairman of the Lopez group at that time, said that the sale was made under duress, as his brother Eugenio Jr. had been arrested and jailed in a maximum-security prison in Fort Bonifacio.

Whichever reason is true, Bongbong will be making history if he wrests control of Meralco from foreigners, and turns it over either to government, to an entity whose owners are the electricity consumers themselves (as Marcos seemed to have envisioned when he set up the Meralco Foundation), or to a consortium of at least patriotic Filipino magnates. At least that would prevent the siphoning of its income out of the country.

*These statements are supported by documents: See my 2016 book Colossal Deception: How Foreigners Control Our Telecoms Sector, available online rigobertotiglao.com/shop, and at amazon.com.

The arrogance of an Indonesian magnate’s lackey

Turn Boracay into a national park