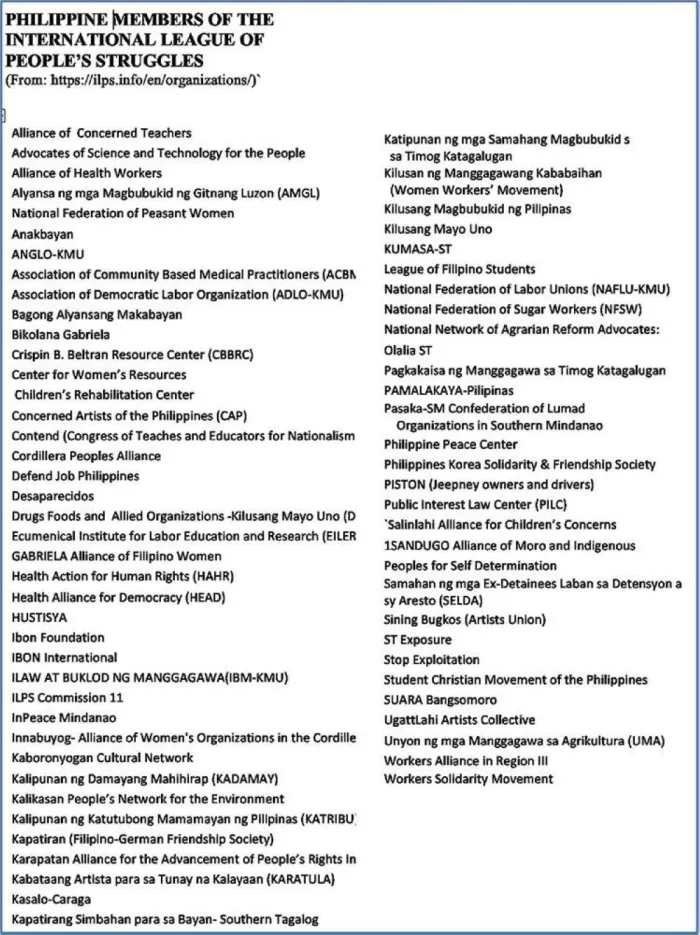 Stopping “red tagging” would reverse the Duterte administration’s huge gains in ending the communist insurgency. Being an academic, Banlaoi should first also do some research before he opens his mouth.

In 2015, a group of Red fronts “tagged” as such by President Benigno Aquino 3rd’s administration — among them Bayan Muna, Gabriela, Anakpawis and their representatives — filed a suit at the Supreme Court asking it to declare illegal such practice by the military, on grounds that it risked their lives.

The high court, with only one dissenting vote — of course, that of Justice Marivic Leonen — threw out the petition, declaring that “mere membership in such organizations [red-tagged] do not equate to actual threats.”

The issue involves not only the legality of such red-tagging or the academic contortions of Banlaoi (“How can we have national security if our human rights are violated [through red-tagging], he pontificated). My views come not from some academic ivory tower, nor even from the testimonies of young NPA members recruited through the fronts, but from my own experience, and as participant-witness in the communist movement.

If the Ferdinand E. Marcos administration in the late 1960s and 1970s had only persisted in exposing communist fronts with the same intensity that President Duterte’s administration did, I would likely not have been a communist cadre, to eventually be detained at Fort Bonifacio for two years.

Tens of thousands of our idealistic youth — even the best and brightest — would not have been recruited to the Communist Party and the New People’s Army to have wasted lives, imprisoned and even killed in some forgotten jungle.

In fact, without these communist recruitment agencies — heavily disguised of course — the Communist Party could not have grown as it has.

I’ll explain, as Banlaoi doesn’t have a clue it seems, how communist recruitment happens.

Because the communist ideology is expressly atheistic, and because of America’s demonizing of communists, there could have been, and indeed there were only few Filipinos in this Catholic country, a former US colony who directly joined the Communist Party. It was the front organizations — called mass organizations (MOs) set up by the old pro-Soviet Partido Komunista ng Pilipinas and the Maoist Communist Party of the Philippines that attracted young people to join them, not knowing they were Red-controlled fronts. In the 1970s these were mostly associations championing nationalism. Starting in the 1980s, the CPP set up fronts for each sector (teachers, fishermen, rural poor, etc.) which pretend to be protectors of human rights or claim to be devoted to lifting up the welfare of the poor in various sectors. There are over a hundred of such fronts now.

Jose Ma. Sison inadvertently red-tagged these when he listed them as members of the International League for People’s Struggles which he organized — and which voted for him as its chairman. (See my column on this, Sept. 14, 2020, “Sison, with his huge ego, red-tagged his communist fronts long ago.” Sison’s list is in the accompanying image.)

In my case, I had joined the Kabataang Makabayan (“Nationalist Youth”) when I was in college. There was a bit of colonial mentality or faddishness there really. I idolized the US’ Students for a Democratic Society (SDS) and even the armed Weathermen, and wanted to join their counterparts here.

I had no idea that the KM was a front for the newly organized CPP. In fact it was CPP founder Jose Ma. Sison himself organized it before he broke away from the PKP.

On the other hand PKP cadres organized the Malayang Kilusan ng Makabayan Pilipino to rival the KM and, believe it or not, even such an innocuous-looking association as the Bertrand Russell Peace Foundation. Now you understand how deep communist recruitment has been in UP?

Absolutely nothing in the KM’s oath of membership and constitution talked about communism nor the need for armed revolution. All they said was that it was espousing nationalism, that it was against US imperialism, and advocating “national democracy.” That term actually was a giveaway as that was how Mao Zedong described what his party would immediately build in China, and only after decades would it be a socialist state, and after centuries, a communist society.

After one is recruited, the usual dynamics of being transformed into a true believer in an organization – from frats to religious fanatic groups — works its way into a young man’s head. The organization provides him with an “in group” which he can confidently be part of. His still malleable ego takes shape along the ideals of the organization: “I am a patriot, a nationalist devoted to changing Philippine society into a just and prosperous one.”

The organization then provides the young recruit with an existential experience to validate its claims, and gradually introduces Marxism. Being beaten by truncheons in a rally drives home the point in a recruit’s mind for instance: the police is an instrument of the ruling class. In my case, I realized the ruthlessness of class society is after three nights of hell on earth in the Marikina city jail; after police arrested me for joining striking workers’ picket line in the Goya chocolate factory, there was my Damascus conversion

For this purpose, the CPP sends the front’s members to visit the poorest rural community, to an industrial strike, or to an NPA camp, to impress upon the clueless recruit how bad the situation in the country is, but with the NPA, there would be a glorious revolution soon.

All along, the recruit’s most trusted friend, or the MO’s admired leader, gradually introduces the fact that a robust communist movement, with an NPA, exists, that communism is really not bad at all, but has been demonized by Western imperialism since it will bring down its fall, and usher in a prosperous and just society.

In my time when there were no good libraries or bookstores, and the global communist movement was roaring with Vietnam soon to fall, that was of course easy to believe. I cannot understand why in this internet age when so much material is easily accessible on how communism has failed, and how the so-called communist revolutions were quirks that had nothing to do with it, the CPP can still fool young people.

The CPP is then portrayed as some kind of secret organization to save mankind, and for an impressionable young man membership in it is something to aspire for. Who wouldn’t want to be a member of a real-life Illuminati or the Knights Templar?

This is the reality of the insidious recruitment by Red fronts, why they need to be identified, so a young man or woman will be warned against joining it.

Our problem though is semantic: the usage of “tag” is that it is an arbitrary, or hastily done categorization of people. What the government really means is exposing certain organizations — after much research and verification — as fronts set up by the Communist Party, which is determined to topple our democratic government. But they should be very sure their Red-tagging is accurate, or that campaign loses credibility, to the communists’ advantage.

Going back to yoga

Not a democracy, but celebrity rule