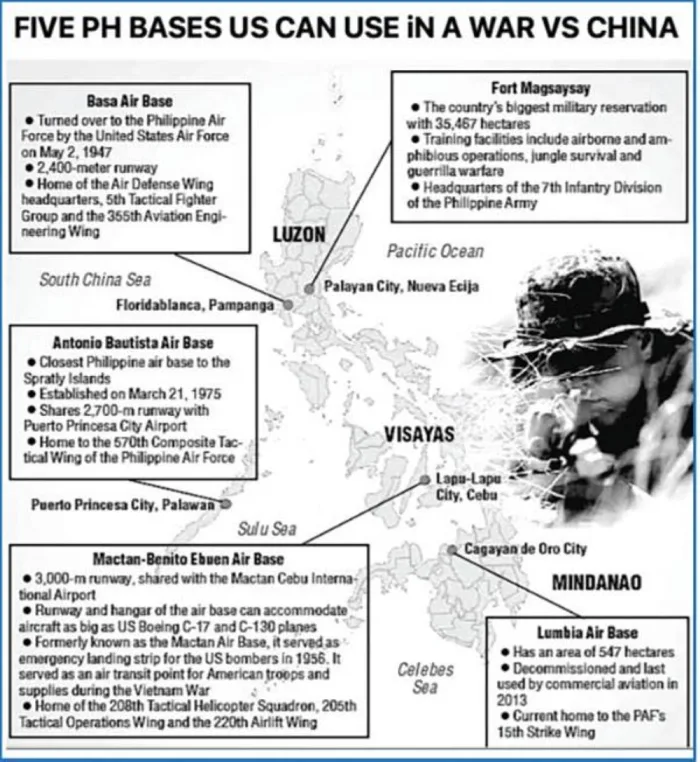 Right now China’s People’s Liberation Army may have likely already plotted the coordinates for its nuclear missiles to hit five military camps in the country in case of a war with the US.

These are the five camps that Aquino 3rd authorized the US military to use as its “forward bases” in case it gets involved in an armed conflict anywhere in the world. The South China Sea is likely to be a battlefield for a conventional or a limited nuclear war between the US and China. The Asian superpower had transformed — in retaliation against the arbitration suit the Aquino government filed against it in 2012 — the seven reefs it had occupied into artificial island-fortresses — vulnerable sitting ducks US military analysts claim, but are de facto aircraft carriers, other more objective Western analysts conclude.

Three of these camps are in our fast-growing megacities: Basa Air Base near Angeles City in Pampanga, Benito Airbase on Mactan island, and Lumbia Airbase in Cagayan de Oro City. The fourth base is Antonio Bautista Airbase in Puerto Princesa and the fifth, Fort Magsaysay, in Palayan, Nueva Ecija. Even if war doesn’t erupt between China and the US, and only the threat of war, investors would likely think twice before investing long term in these areas.

The US had cleverly manipulated events and our officials during the Aquino 3rd administration to frighten him and the political elite into agreeing in 2014 to this authorization called the Enhanced Defense Cooperation Agreement (EDCA).

That is a colossal euphemism, since it restored the US military bases in the Philippines (kicked out by the Senate in 1992) in a modern form and much cheaper for the Americans. The agreement doesn’t require the US to build expensive facilities, but authorizes its use of our military’s facilities (airstrips, barracks, communications) in case of war.

As the US demonstrated in its wars in Iraq and Afghanistan, it can build huge facilities in Basa Air Base or Fort Magsaysay practically overnight. EDCA authorizes the US to stockpile their war materiel and station its for-combat troops in five of our military camps, whenever they wish. The 1987 Constitution bans any nuclear weapons from being brought into the country. But do you think the US will inform us that their B-2 Stealth bombers are carrying nuclear bombs?

Cases were filed in the Supreme Court claiming that the EDCA was illegal, even scandalous, as it was signed only by two lower ranking officials, Defense Secretary Voltaire Gazmin and US Ambassador to the Philippines Philip Goldberg.

Then Senior Associate Justice Antonio Carpio convinced his colleagues to turn a blind eye to the fact that since it was obviously a treaty, it required Senate ratification, which it did not have. He scared the justices out of their wits: if they invalidate the EDCA, China would very soon be grabbing all of our territories in the Spratlys.

How soon? Next year, Carpio said during the 2016 court deliberations. As he explained in his concurring opinion to the decision penned by Sereno: “With the anticipated installation by China of military facilities and war materials in its three bases in the Spratlys, expected to be completed before the end of 2016, China will begin to aggressively enforce its nine-dash line claim over the South China Sea (which claim encompasses the West Philippine Sea and the Kalayaan Island Group).”

Carpio even warned the court that without EDCA, China might even take over the Malampaya gas rigs, “which supplies 40 percent of the energy requirement of Luzon, as China’s nine-dash line encroaches partly on Malampaya.” Aquino 3rd’s chief justice, Maria Lourdes Sereno, who wrote the decision, practically simply repeated Carpio’s claims. Eight out of the 12 justices voted to uphold EDCA as constitutional.

Carpio in his concurring opinion even pretended to be an expert in modern military strategy, claiming the following:

“In modern warfare, the successful implementation of a mutual defense treaty requires the strategic pre-positioning of war materials. Before the advent of guided missiles and drones, wars could take months or even years to prosecute. There was plenty of time to conscript and train soldiers, manufacture guns and artillery, and ship war materials to strategic locations even after the war had started. Today, wars could be won or lost in the first few weeks or even first few days after the initial outbreak of war.

“In modern warfare, the pre-positioning of war materials, like mobile anti-ship and anti-aircraft missiles, is absolutely necessary and essential to a successful defense against armed aggression, particularly for a coastal state like the Philippines. This is what the EDCA is all about — the pre-positioning in strategic locations of war materials to successfully resist any armed aggression.”

As it is likely to turn out, the EDCA was not really designed for the US military to defend us from the Chinese, whom Carpio claimed will be invading us.

Instead, EDCA was designed to help the US deploy its troops, supplies and war machines aircraft from its West Coast bases in a war with China over Taiwan.

But how likely is a war between the US and China to break out? The biggest argument that this likely is that since the 1995-1996 Taiwan crisis triggered by the Taiwanese President Lee Teng-hui’s visit to his alma mater Cornell University (this time around, it is because of Speaker Nancy Pelosi’s visit), much have happened to make Chinese leaders more confident they can pull off the “reunification” of China. As will be discussed on Wednesday, our row with China, and ironically Russia’s invasion of Ukraine had a role in emboldening it.

Philippine braggadocio, then and now