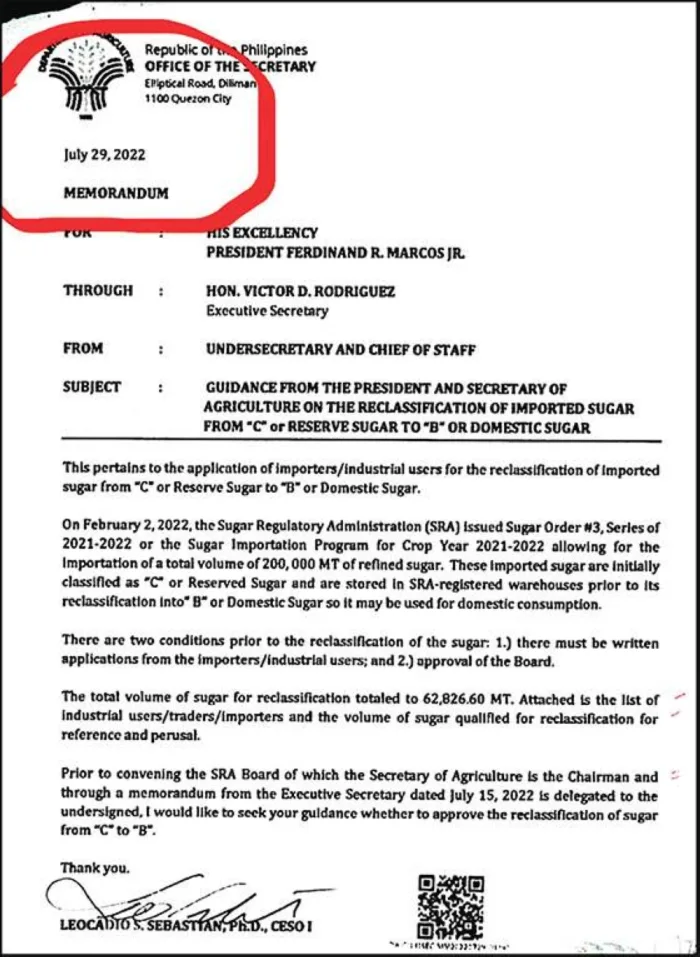 But didn’t his “Memorandum” of July 15 to Sebastian give him authority to do so? “No, we even sent him a list of his ‘authorities’ that didn’t include signing for the President as his representative in the SRA,” the executive secretary said. He was authorized to represent the President in meetings where he cannot attend, but he wasn’t authorized to “sign for the President” in any major decision of that body.

Rodriguez explained: “I thought that this was clear for Sebastian when he officially asked the President through my office for “guidance” on an issue that was less important than the importation of 300,000 MT of sugar. This was for the release to the market of 63,000 MT of sugar that was part of the 200,000 MT importation authorized by Sugar Order No. 3. His request was made July 29, and we haven’t acted on it, so the SRA hasn’t released those sugar stocks.”

“Section G of my memorandum to him expanding Sebastian’s authority was clear that he should ‘implement the policies of the DA, in accordance with the directives… of the President,'” he said.

“But there was yet no policy as regards sugar importation because we have yet to establish the factual basis for importing the needed quantity of sugar to promote the interest of the industrial users vis-à-vis the interest of the local producers and the stability of prices and supply for domestic/home consumption. Nandun pa lang kami sa stage na ‘yun, when they passed that SO 4 without clearance from the acting secretary, PBBM.”

Rodriguez narrated that the President himself had been in meetings on how to stabilize the supply of sugar. “For example, the President asked us to ask if it would be feasible for the Philippine International Trading Corp. (PITC) to undertake the importations, instead of being done by traders, to do away with their profit margins.” (However, I was informed yesterday that the SRA had not accredited PITC as a sugar importer for the new 300,000 MT importation.)

Rodriguez claimed that after several meetings, he and the President were unconvinced that the country should immediately import 300,000 MT of sugar.

“The SRA couldn’t even give us an accounting of the 200,000 MT importations it authorized in February, whether this was done in defiance of two Negros Occidental courts’ restraining orders to do so, in response to the suit filed by planters.”

The executive secretary disclosed that his office is investigating reports that the 300,000 MT importation was being pushed aggressively by certain traders who intend to use it as a “cover” for them to release the sugar they had hoarded but couldn’t release as this would depress prices. One report said this could result in windfall profits for them of at least P300 million, and a part of this amount has been mobilized as lobby money.

I was wrong when I said in my column last Monday that it would be preposterous to believe that agriculture official Sebastian and SRA administrator Serafica approved the order to import the 300,000 MT of sugar, without Marcos’ approval. And so I do what an adage attributed to British notables, among them Winston Churchill, recommends: “When my information changes, I alter my conclusions. What do you do, sir?”

Well, the new information shows that they did, and I can only surmise how they could have been so bold that they could do that, and get away with it.

A source apparently sympathetic to Sebastian had sent me a copy of his memorandum to the President that would seem to show that Malacañang was well informed of the plan to issue the sugar order, and that the agriculture official was unfairly being made a scapegoat.

Sebastian in his memorandum reported to Rodriguez that based on the SRA’s staff’s analysis, he was recommending the 300,000 MT importation. Sebastian wrote: “The SRA board will meet to approve the recommended volume [which would be in the form of Sugar Order 4].

But here’s the problem. The letter is dated August 5, and the SRA board met on August 9 and passed the sugar order. C’mon, did Sebastian really expect the Office of the President to respond to his memorandum in just three days’ time, for him to tell the SRA board to go ahead with Sugar Order 4?

There are two things that strike me as rather strange in Sebastian’s memorandum. In contrast to his other communications with Malacañang, it was addressed directly to the President, without any of the usual notation, “Through Hon. Victor D. Rodriguez Executive Secretary.” In fact, there wasn’t even a “cc” to Rodriguez here. There is also no QR code posted on correspondence received by Malacañang.

Rodriguez told me: “As late as August 7, there was no clearance to do what they did. Sebastian knows from several instances in the past that when he asked for clearance for some decision from the President, and if I don’t reply on his request, it means the President hasn’t decided yet.”

Or, was Sebastian’s August 5 letter a calculated risk? Could he have thought that Marcos would decide that the sugar order was a fait accompli and for him not to rock the boat? After all, he could thought that rescinding the order would make his government appear that he is not running a tight ship. Sebastian then would the credit for getting the order out, pleasing those itching to import the sugar. The other scenario: if Marcos didn’t like the sugar order, Sebastian could have said, “Oops, sorry, I misunderstand the powers given me by Rodriguez and I assumed Marcos would like the importation.”

The sugar order was released August 9, and posted on the SRA website. Rodriguez, knowing it hadn’t been approved by Marcos, ordered the SRA on August 10 to delete the announcement. August 11, Sebastian submitted his letter of resignation to Marcos as Agriculture undersecretary and his chief of staff. “I sincerely offer my apologies, Your Excellency, for my having approved Sugar Order No. 4 on your behalf, and through the authority you had vested upon me. It has become clear that the same was not in keeping with your administration’s desired direction for the sugar industry.”

Rodriguez told me through text message, when I asked him if Sebastian met with him after the order was rescinded:

“He did on the day we learned of their passage of SO 4. All he did was to say ‘Akala ko ho kasi ay okey na.’

“I asked him to call SRA Administrator Serafica and put him on speaker phone with board member Beltran also on the other line and asked them the same question. I got the same reply: ‘Akala ko ho kasi okey na as per Sebastian.’

“The following day, August 11, around 9:45 a.m. (as reflected in the log book), without the benefit of any appointment, Serafica, upon instruction from Sebastian, went to my office and asked if he may submit his resignation letter to me for clear loss of trust and confidence. I simply told him, ‘Do not pass on to me the burden of deciding what you should do or not do under this circumstance when you didn’t even give us the courtesy to, at the very least be notified of what you were to do.’ I even asked him, ‘Where are you getting the guts and temerity to do what you did behind the President’s back?’ I then told him he is free to leave. This all transpired in the presence of my senior deputy ES.”

The President’s sister, Sen. Imee Marcos, wrote last week on her Facebook page: “Huwag niyong niloloko ang ading ko (Stop deceiving my little brother!)!” I thought last Monday that was an unfair, even crude, claim. Now it seems, she might have hit the nail right on the head.