ONE big failure of President Ferdinand Marcos, Jr. in his first 100 days in power is this: He has failed to connect with the masses, which down the road could weaken his political base, making it harder for him to govern the country. Instead, his optics have portrayed him as among the country’s elite, in stark contrast to his predecessor Rodrigo Duterte’s image as, yes, a politician, but one with the masses, who knows what he masses feel.

What else would one expect, with images of him with this magnate-friends drinking wine as soon as it became clear he would be winning the election, of his luxurious inauguration and birthday parties, and singing heartily at a senator’s posh birthday celebration.

Any images of him showing concern for the poor, or those suffering from some calamity in these first 100 days? None. Although he did an aerial inspection of the flooded areas in Central Luzon hit by typhoon Karding last month, he didn’t land in any place, according to him, “so that local authorities can focus relief efforts need not welcome him.” That may be true, but that won’t endear him to the masses.

The images of the Marcos presidency’s first 100 days are those with him in his impeccably tailored (and obviously expensive) jusi barong making a speech at the UN, meeting with the US president and his Indonesian and Singaporean counterparts, and foreign businessmen purportedly making pledges to invest in the Philippines.

Compare that with Duterte in his first 100 days  in crumpled, off-the-shelf barong (or his favorite violet corduroy shirt) meeting with the police to boost their morale in his anti-illegal drug campaign.

Images of Marcos being buddy-buddy with the tycoons will not endear him to the masses. Instead, he will his persona will be as the Crown Prince of the Kingdom of the North who managed, because of an unusual convergence of forces – the anti-Yellows, the solid loyalist North, and Duterte’s huge political base – to capture the throne, but not really a president for the poor. If he does not change his image soon,  this will resuscitate what’s left of the Yellows, and  resurrect their narrative of the Marcos era having been simply a government for cronies that impoverished the masses.

Duterte in first 100 days got the country to stand up, in praise or shock, as he launched his intense anti-drug war and promised to jail the corrupt. He  shocked the nation when he claimed in August 2016 that Sen. Leila de Lim, a former justice secretary, had her driver/lover acting as her liaison with drug lords who gave her bribes. A few months later, the police filed  charges against her for collusion with drug lords.

Whether you think those were bad things that Duterte did or not,  Marcos’ first 100 days, in comparison, look so  boring. The only “excitement,” if you could say that, in Marcos’ first 100 days, were rumors of a monumental power play between the camp of his erstwhile most trusted official and that of the person “who cannot be named.”

Duterte made us stand up, worried or impressed, by his appointment of  opposition leader Vice President Leonor Robredo, as chair of the Housing and Urban Development Coordinating Council and the co-chairperson of the Inter-Agency Committee on Anti-Illegal Drugs. Together with the appointment of top leftist leaders Judy Taguiwalo and Rafael Mariano to Cabinet posts, this represented,  Duterte said, his efforts to unite the country.

In contrast, in his first week in office, Marcos even ordered all appointees of Duterte – whose supporters were responsible for his electoral win – to immediately step down, as if they were his enemies. The last time this happened was in March 1986 when the presumed president Cory Aquino ordered all Marcos appointees, and even local government heads, fired.

It is indeed ironic that this president whose electoral machinery he called the Uniteam, to emphasize its main goal which was to unite the country, allowed in his first 100 days his Cabinet to be disunited, with two factions fighting, to the death as it were, that one faction launched a ruthless media campaign against their main target,  former Executive Secretary Victor Rodriguez, which heartlessly included even his wife and in-laws.

Am I being too pessimistic? Perhaps, but there is a measurement we can use to evaluate Marcos’ first 100 days:  PulseAsia’s polls (taken September 17 to 21, or 78 to 83 days since assuming power) on Filipinos’ approval/disapproval of this administration in handling national issues.

This kind of poll reports not really what a president has been actually doing in his first 100 days as it takes months for such information to trickle down even to the middle classes. The PulseAsia poll reports what Filipinos think  a president is doing, their image of him, based mainly on the limited and sometimes even wrong  information given them by media. But we cannot take that survey in isolation, as numbers are significant only if they are compared to other numbers. 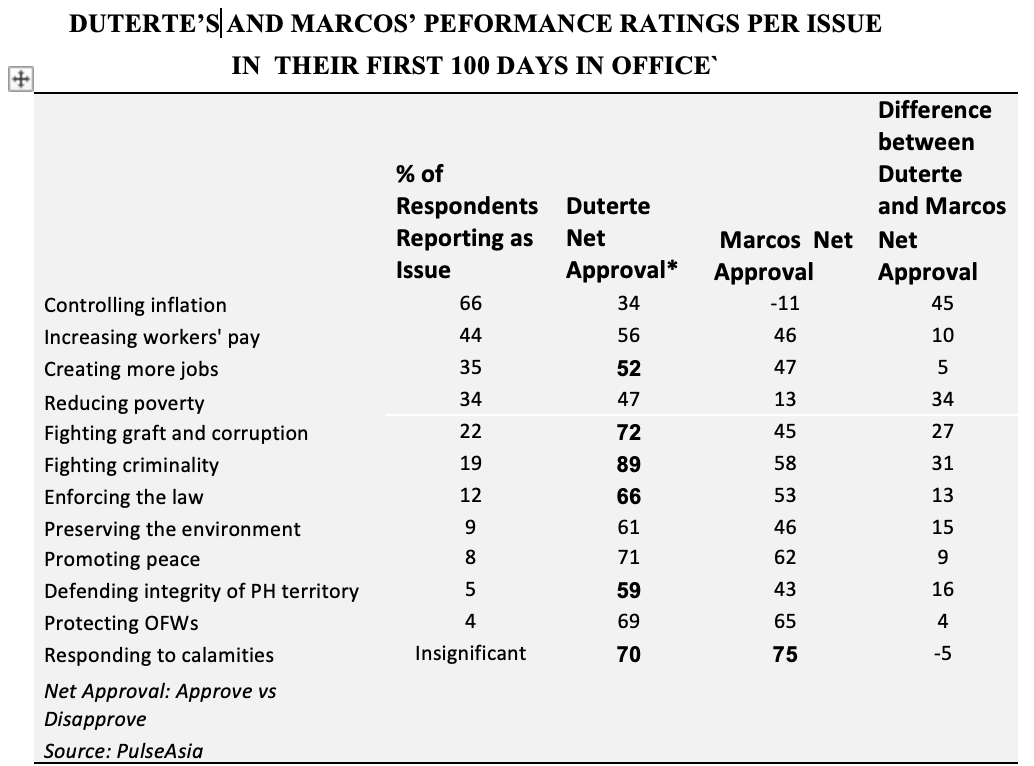 PulseAsia did a similar survey on immediate past president Rodrigo Duterte’s first 100 days, undertaken Sept. 28 to Oct. 1, 2016. Comparing the results of the two surveys, Filipinos think that Marcos’ predecessor, Duterte, whom he has totally ignored, was doing much better than him in their first 100 days.

This is remarkable since the US and Western, as well the powerful Yellow-controlled media then were going full-blast lambasting  a president they viewed as Marcos 2.0. And they had tons of ammunition, what with Duterte’s curses against the Pope, against Obama and his I-will-kill-drug-pushers rhetoric.

PulseAsia asked its respondents whether they approved, disapproved, or were undecided on the president’s performance in addressing 13 main national issues. These issues were arrived at and prioritized by the number of respondents reporting them as such. I have excluded  though the issue about controlling the spread of Covid-19 since the pandemic didn’t exist during Duterte’s first 100 days. The PulseAsia report is summarized in the table accompanying this column,

Except for the issue “responding to calamities,” which was viewed only by a few to be an important issue, the respondents thought Duterte was addressing their concerns much better than Marcos. The differences between Duterte’s net approval rating (“approve vs disapprove”) and that for Marcos are by double-digits in  six out of the 12 issues. This is in the issues of controlling inflation, increasing wages, reducing poverty, creating more jobs, reducing crime, enforcing the law.

Marcos’ numbers for these issues bolster my thesis that Marcos isn’t connecting with the masses, or that they don’t think he is attending to their major concerns.

Surprisingly, even as Marcos has moved closer to the US, respondents think that Duterte – who moved towards China – did much better in the issue “defending Philippine territory against foreigners.”

PulseAsia also undertook a  poll on Duterte’s performance and trust rating from Sept. 26 to Oct. 1 , 2016 which gave him an 86 percent approval, indicating Filipinos’ extremely high esteem for him. Based on the poll on each national issue, I don’t think Marcos’ approval rating will be anywhere near that, probably in the 60s range.

That would make the country harder for Marcos to govern.

Please somebody gag his mouth