With his move, Musk declared: “Twitter is mine to do as I wish, which is to make as much money out of it in the shortest possible time.”
That move, and the US Senate investigations last year on how Facebook manipulates its users’ posts for its own moneymaking ends just prove that China’s policy of banning US firms like Facebook and Twitter, starting to prevent them exploiting its internet population is correct. The move was widely condemned at the time, but it was right. 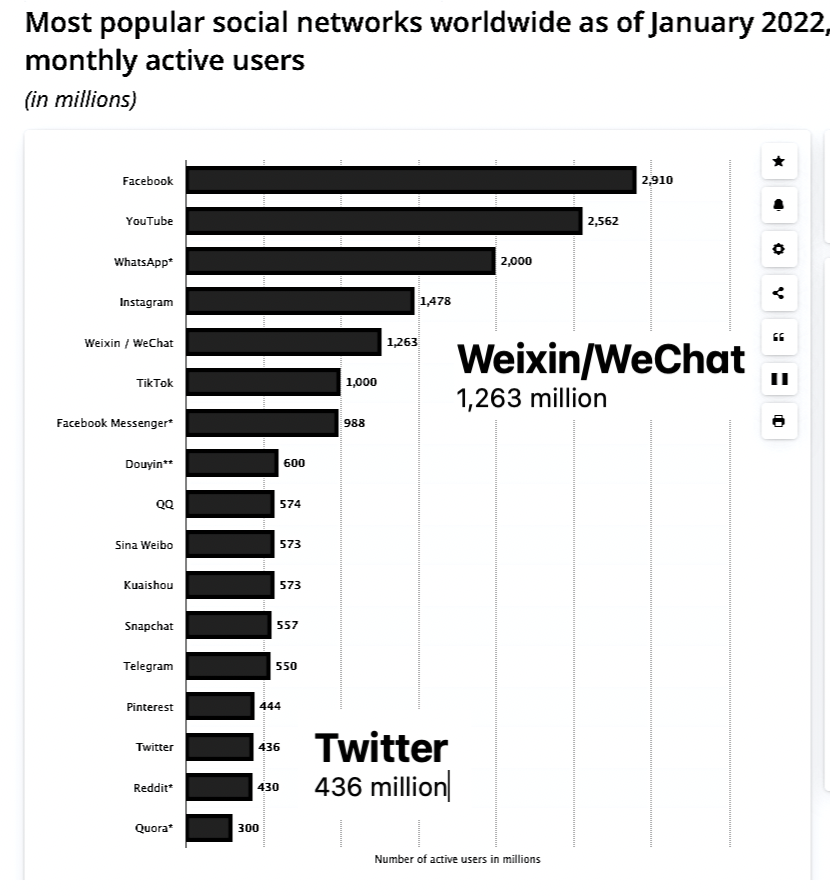 In the early 2000s, as social media, especially Twitter, started its phenomenal growth, China issued regulations to control internet and social media content. However, it was only after the riots in Urumqi by the minority Uighurs in 2009, with thousands of Twitter and Facebook posts condemning alleged killings and arrests by central government forces, did China order the two social media platforms and other US sites closed.

While the West condemned this move, and even threatened retaliation, it proved to be a boon to China – to its economy, especially to its digital-age boom. Chinese entrepreneurs – especially Chinese who studied technology in the US – swiftly filled the gap, setting up the now giant microblogging (i.e. Twitter-like) sites such as Sina Weibo, NetEase, Sohu and Tencent. From just 63 million in 2010, Chinese users grew to 195 million the next year.

The pioneer Weibo would be overtaken by WeChat in 2013, which is probably the most versatile app in the world: Imagine, GCash, Paymaya, Twitter, Messenger, Viber (or Signal) with both text and voice capability rolled into one. When I visited Beijing several years back, the Chinese were using WeChat to pay for a bill in a posh restaurant and in hole-in-the-wall noodle shop while at the same time chatting with a friend. Small stores were even rejecting cash payments. Now how much in productivity, in ease of doing business, velocity of money did such platforms as WeChat contribute?

What boosted Chinese social media platforms was the boom in China’s mobile and smartphone industries – because of massive government support — as these platforms were accessed more and more through these devices rather than through stationary computers or laptops. Weixin/WeChat with monthly active users of 1.3 billion is now bigger than Twitter with 430 million.

Idolators of the US of course would claim that such social media’s contribution to Chinese business is at the cost of democracy: That anti-government posts and paeans to democracy would be censored.

A 2017 study in the Journal of Economic Perspectives undertook an empirical study to determine if such a claim was accurate – studying over 13.2 billion blog posts in Sina Weibo from 2009-2013 through an automated process.

Its conclusion: “Our primary finding is that a shockingly large number of posts on highly sensitive topics were published and circulated on social media. We find an even larger number of posts with explicit corruption allegations, and that these posts predict future corruption charges of specific individuals.” The second sentence implies that Chinese social media has even been a tool for better governance.

During the 2012 Scarborough standoff between the Aquino 3rd administration and China, Weibo was deluged with posts that the People’s Liberation Army should invade the Philippines, an episode that shows that the Chinese government doesn’t control its social media, and vice versa. As that study pointed out, “Our findings challenge a popular view that an authoritarian regime would relentlessly censor or even ban social media. Instead, the interaction of an authoritarian government with social media seems more complex.”

The 2017 study also pointed out: “Nearly one-half of the population [in 2021, the figure is 73 percent] has access to the internet, and two of every 10 Chinese actively use Weibo [in 2018 it was four out of 10[. Every day, millions of blog posts are produced, exchanged, and commented upon. Many of these posts reach thousands or even millions of readers. It would be very costly for China’s government to monitor millions of users, especially when they are sometimes posted in large surges in the middle of the night.” So much for American magazine writers claiming that there are Chinese armies of internet censors.

My point: Twitter’s demise doesn’t mean the end of social media, as the world isn’t just the US and the West. China has proven it can have its own social-media world. We can also have our own.

In 2020 India banned the huge Chinese platforms Tiktok, Weibo,WeChat and 54 other apps. The reason the Indian government gave was that there was “information that the apps were engaged in activities which are prejudicial to sovereignty and integrity of India.”

The real reason is that India soon realized that it has roughly the same huge population (1.4 billion) which, with the spread of the internet and smartphones, it could build social-media platforms as large as the biggest in China.

Perhaps I’m much of a dreamer. But if Twitter and Facebook were to collapse, I’m sure our oligarchs and our allegedly techie geniuses can build a Filipino-owned and -controlled version of these two social-media platforms. We often forget that our huge population is an asset, if we don’t allow foreign firms to exclusively exploit it as the Indonesian-controlled Smart and Singtel-dominated Globe have.

After all, as of January 2022, we reportedly had 92.1 million social media users. That’s enough population base to build our, say, “PinoyChat,” maybe even ‘PidroGo,” to honor an old friend who recently passed away, Danny Javier, or to congratulate one of the most widely followed Facebook Filipino socio-political commentary account, and with the First Lady’s sponsorship, “Linking Pinoys.”

The real origins of Christmas

The communist insurgency: The Marcos-Aquino curse on the nation