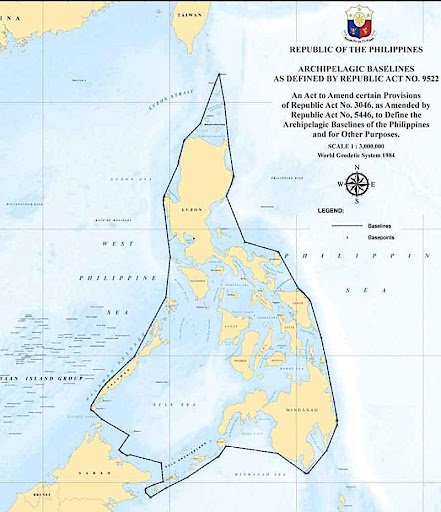 IN his only solo session at the World Economic Forum in Davos last week, a 21-minute interview by the WEF president Børge Brende, President Ferdinand “Bongbong” Marcos, Jr. showed how much he is so terribly misinformed about the country’s dispute with China in the South China Sea.
While he may have been simply confused about the details of the dispute, still, his misinformation is as bad as that of President Benigno Aquino 3rd that led to his unnecessarily belligerent stance towards China, which eventually led to a dangerous stand-off at Panatag Shoal and our loss of that territory in 2012.

Going to the topic of the South China Sea dispute, the interviewer asked Marcos: “What defines what is Filipino territory and what is Chinese territory” He replied: “ We have no conflicting claims with China. What we have is China making claims on our territory – that is how we approach the problem we find.”

That is exactly the “what-is-ours-is-ours approach’ of President Aquino 3rd, which in effect portrays China as an aggressor, who therefore has to give in to the Philippines’ demand and that there can be no compromise on this.
Diplomatic sources claimed that statement alone has sent a bad message to China, which would likely be more cautious in dealing with the Philippines. They added: With that kind of hardline stance China may just decide to cease all attempts at settling its South China Sea problem with the Philippines.

Since the interview was posted in the WEF, Marcos practically boasted to the world that he is badgering China on the South China Sea issue: “There’s no way to avoid the issue. There is no way to avoid it. We describe it and I suppose in diplomatic language as one part of our relationship but it is an important and unavoidable issue that we have to ventilate and we cannot sweep it under the rug and pretend it’s not happening because there are effects not only in the diplomatic sense, not only in the security sense, but even in the livelihood of our citizens.”

Marcos’ saying that China and the Philippines “can’t be sweeping under the rug” the South China Sea dispute would be insulting to the Chinese, whose announced policy on territorial disputes was formulated by China’s revered leader Deng Xiaoping in 1978 that became that country’s doctrine: “Set aside dispute and pursue joint development.” That was the slogan that was based from Deng’s lengthier sentence, “Let us put aside this dispute which future generations may have more wisdom to resolve. “

Marcos also seemed to boast in the interview: “I would not be doing my job if I did not bring up these issues with President Xi when I had the opportunity.” A source who was with Marcos’ delegation to China early this month confirmed that Xi appeared irritated over the president’s insistence on raising the South China Sea issue. “I’m worried that Xi may just decide to ignore the Philippines totally. We need China more than it needs us.”

Marcos’ Aquino-like “what-is-ours-is ours” mentality is due to his gross ignorance over how our territorial and maritime-area disputes with China emerged. We do have conflicting claims with China, and we also do with Vietnam, Taiwan, and even Malaysia, which also claim what we consider our “territory” as theirs. The entire world, even the US, sees our South China problem as one of conflicting claims. Only Marcos doesn’t see it that way.

Marcos is in effect saying that we were minding our own business in our territory when China one day suddenly claimed our territory This is just not true, China had defined its territory as including the Spratly islands since before World War 2, and in fact even a century before that during its imperial era, and that this has been clearly shown in their maps.

Chou Enlai, after Mao Zedong, the most revered leader of the Chinese, in 1947 was furious when the US and its allies refused to officially turn over the Spratlys to China, by simply being silent on it in the 1952 San Francisco Treaty in which Japan officially turned over territories it annexed during World War 2, which included those islands.

China also reaffirmed that the Spratlys (as well as three other areas in the South China Sea ) were part of its territory in its 1958 “Declaration of the Government of the People’s Republic of China on China’s Territorial Sea.” Earlier in 1946, the Spratlys (which it called the Nansha Islands) were placed under the administration of the Hainan Special Administration District, and in 1947, its interior ministry announced the official names of all the features in the Spratlys and the three other areas.

Marcos does not seem to know how we got into a territorial dispute with China. It was his father, President Ferdinand E. Marcos, who through a decree in 1978 annexed a hexagonal figure surrounding the Spratlys, and called it the Kalayaan Island Group. Our claim was made only at least a century after the Chinese did theirs.
The elder Marcos’ justification was that China nor Taiwan didn’t seem to be enforcing its sovereignty over the area, so that it was in effect in international law res nullius, that is, “nobody owned it.” So he simply declared that the Philippines owned it.*

The younger Marcos’ ignorance of our South China Sea problem gets worse. Apparently trying hard to appear knowledgeable about our dispute with China, he said in the Davos interview: “We’ve established our baselines. The baselines was [sic] drawn out, were given to the UN and Unclos has accredited those baselines as the baselines of the Philippines. And we live with them for many, many years without a problem. And suddenly, things have changed.”

Marcos doesn’t know what he is talking about.
Our baselines – which we certainly have not “lived with for many, many years” – were established only in 2009 by Republic Act 9522. These are the lines defined by the UN Convention on the Law of the Sea (Unclos) along a country’s coast, from which are measured the limits of a state’s territorial sea, its exclusive economic zone (EEZ), and other maritime zones of jurisdiction.

The baselines under that law redefined our territory (land and internal waters) from that demarcated by the 1898 Treaty of Paris (by which Spain ceded us to the US for $20 million). That treaty had defined the Philippines’ official territory as an irregular box that includes a huge swath of seas, which however, doesn’t comply with UNCLOS provisions.

Now here’s what’s worrying over Marcos’ ignorance on this issue.
First, the Philippines’ official territory is within the baselines. China hasn’t made any claim over any area inside the baselines So he’s terribly wrong in his statement that “China is making claims on our territory.” **

However, the Kalayaan Island Group and Panatag Shoal – the areas which are in dispute with China are not within any baselines. While the baseline law says these “Regime of Islands,” there is no explanation on what this regime is.

Second, while theoretically under Unclos provisions, our territorial waters and EEZ are measured — at the maximum — 12 nautical miles and 200 nautical miles from the baselines, there has to be a law to officially declare these and how these are to be precisely measured.
Furthermore, the documents for this would have to be submitted to the UN that would circulate it among its members to determine if it complies with the Unclos and does not encroach on EEZs and territorial seas of other countries. If it does, Unclos would have to ask the Philippines to negotiate with those countries whose EEZs overlap with ours for an agreement.

Without such a law we really cannot claim any territorial sea and EEZ that China is encroaching on. A provision in the 2016 ruling of the arbitration panel on the suit that the Aquino government brought against China pointed out that our Kalayaan Island Group violates Unclos’ guidelines on an archipelago’s baselines, and should therefore be junked.

The country’s official map-maker the National Mapping and Resource Information Authority hasn’t produced an official map showing our territorial waters and EEZ, since only the Congress through a law can define these. Marcos hasn’t asked the Congress that he really rules to make the passing of such a law a priority.

Aquino and Marcos claim the Reed Bank, where substantial natural-gas deposits which the Indonesian-controlled Philex Mining and the tycoon Enrique Razon want to exploit, are “ours” since it is within our EEZ. But we can’t produce any official map showing that it is.

Complicated certainly. But if our president himself doesn’t understand the complexities of our disputes with China, we cannot even begin to solve these, even as he badgers China about it. The Chinese will laugh when he demands for them to stop “claiming Philippine territory.” They will reply, with a sarcastic grin on their faces: “Show us please in your official map where your territory we are encroaching.”
In terms of misunderstanding our South China Sea issue which he claims we cannot sweep under the rug, Bongbong is Noynoy 2.0. I hope he doesn’t lead us to the disaster Noynoy 1.0 led us in our relations with the superpower in the region.

*This is explained in detail in my 2022 book, Debacle: The Aquino Regime’s Scarborough Fiasco and the South China Sea Arbitration Hoax.
**Scarborough (Panatag) Shoal is claimed now by the Philippines due to our ”effective occupation” of it since before the war.. It is outside the 1898 territorial boundary.

Death penalty lifting did not increase incidence of heinous crimes