That’s probably what Budget Secretary Florencio told congressmen in December to get them to stop delaying things and pass quickly the 2015 General Appropriations Act. 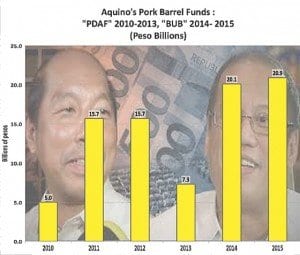 With this new scheme of skirting the Supreme Court rulings declaring President Benigno Aquino’s pork-barrel fund system and Disbursement Acceleration Plan scheme unconstitutional, the 2015 budget is, in effect, a defiant act by Aquino and Abad of raising a dirty finger at the high court saying: “Screw you!”

BUB stands for “Bottom-Up Budgeting” Projects, a scheme by Aquino and Abad started in 2014 to defy the Supreme Court’s 2013 decision that the pork-barrel system designed to bribe Congress—dubbed the Priority Development Assistance Fund —is unconstitutional.

Called as such in 2014, the scheme’s name was changed to “Grassroots Participatory Budgeting” in the deliberations for the 2015 budget last year. Abad decided to use the BUB name sometime in October.

Probably, he thought the congressmen were too obtuse that they needed a very obvious memory-aide to be reminded that he has not removed their pork barrel.

As has been this Administration’s habit of giving noble nomenclatures to its diabolical schemes, the term BUB portrays it as a democratic exercise, when in fact, it is designed entirely to disguise the pork barrel scheme carried on last year and is set to continue this year.

One of the Supreme Court’s definitions of pork barrel, when it ruled it unconstitutional, is as follows: “An appropriation of government spending meant for localized projects and secured solely or primarily to bring money to a representative’s district.”

Going by this definition, the BUB is clearly pork-barrel money. Projects it will fund are those which congressmen have always claimed are the result of their influence on Malacanang or the budget department, such things as listed in the actual budget for 2015 as “livelihood projects,” “livelihood projects,” “artesian wells,” “national greening program” (in a rural area?).

Aquino and Abad, however, revised certain aspects of its use in order to skirt certain guidelines issued by the court.
P12-P15 million per municipality

Instead of allocating a certain amount (P70 million) annually per congressman as was the case under the old pork barrel system, the BUB allocated P12 to P15 million per municipality.

This, however, would be a boon to Aquino’s lackeys. Eastern Samar representative Ben Evardone, in effect, would get P290 million this year, an exponential jump from the P58 million average in allocations he received for 2011-2013. No wonder he’s the noisiest in defending Aquino’s 2015 budget and shouting deadpan, “No pork in budget.”

Why is a province’s population not considered in the amount?

One reason could be that if they considered population as a factor, Abad’s Batanes, with just 16,000 souls and from which place his wife is sole congressman, certainly wouldn’t be getting P75 million – the amount allocated for provinces with 160,000 or 1.6 million in population. Another obvious reason is that most congressmen, in effect, would be allocated P70 million, given the average number of municipalities per congressional district, or pork-barrel per congressman Aquino has distributed since 2010.

To hide these pork-barrel funds, these are not placed as a separate major allocation in the budget, such as “Priority Development Assistance Fund” or “Countrywide Development Fund,” as had been the practice since 1990.

Instead, there is a special provision in the budget of 14 departments and agencies that provides that out of these, a certain amount will be used exclusively for “various programs and projects of LGUs” which are identified in another part of the budget law.

That for the interior and local government department, for instance, reads as follows:

The biggest BUB fund for this year among the 14 departments and agencies is P5.8 billion for the lnterior and Local Government Department, nearly double its P2.8 billion pork-barrel funds last year.

This had prompted Senator Miriam Defensor Santiago to claim that the budget was tailor-made to fit DILG Secretary Mar Roxas’ presidential bid in 2016. The DILG chief would have nearly total control of this multi-billion fund. Roxas would have another P2.8 billion pork barrel, called the Local Government Support Fund, which is totally under his discretion to disburse.

For Aquino and Abad’s scheme, there is no pork barrel, since the funds are allocated to municipalities, not to congressmen.

But a party-list congressman and Senator Santiago, however, have exposed the fact that the congressmen determine the BUB projects. To make it easier for them, forms were even distributed by Abad for them to just fill in during the budget deliberations for the projects they have chosen for their districts. No wonder the congressmen are so supportive of the 2015 budget bill.

One shouldn’t have any business in Congress if he doesn’t believe that BUB allocations will be put on hold for hard-core opposition districts, or those represented by congressmen critical of this regime.

Abad claims that the BUB does not violate the court’s ban on Congress from interfering with budget allocations after the law has been passed. But the list of BUB projects contains so many fund items with still unidentified uses. Who will determine what projects should be funded?

Everyone knows that it will be the congressman who has and always will be the municipality’s only link with the Budget department.

Abad, though, invented another ruse that he thinks will hide such congressmen’s role in local projects, the reason he says why the scheme is called “Bottom-Up Budgeting.” He claims the BUB projects were chosen not by the congressmen but by an assembly in each of 1,600 municipalities consisting of local officials and leaders of NGOs.

Such utter hogwash. Have you heard, dear reader, of such assembly held in your municipality?

BUB is Aquino’s and Abad’s scheme for defying the SC’s ban on pork-barrel funds. No wonder Congress continues to be so subservient to him.

On Monday I’ll discuss their scheme for defying the Court’s ruling on DAP, or their way from 2011 and 2012 of hijacking public money to fund nearly whatever fancied them. This was meant to allow them to start filling their campaign war chest for the 2016 elections.