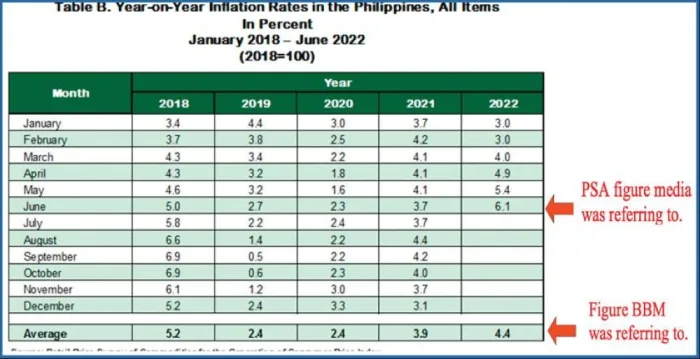 The PSA and other institutions usually mean this when they report the most current inflation figure, which of course uses the month before it is reported, which is the latest month for which the data is available. So, just a few days ago, the PSA reported “June 2022” inflation at 6.1 percent, which means the increase in prices of commodities in the one-year period from June 2021 to June 2022.

But economic policy makers, to better track inflation and its characteristics, use another measure, which is the average of the annual inflation rates of the last 12 months.

This is what the PSA also reported recently, at 4.4 percent — which is the figure BBM was referring to. This 4.4 percent is the average of the annual inflation rates of the months from January to June 2022 (See Table).

The annual rate shows how much prices have risen in one year, without any reference to long-term trends. For instance, the June inflation of 6.1 percent was a spike, due to the 17 percent increase in transport costs, as the rise in petroleum prices in the past months finally made a major impact on inflation. Indeed, the 6.1 percent June rate does not reflect the much lower rates in the past five months.

Indeed, for 2021 and the first three months of the year, annual inflation was in the 3 percent to 4.2 percent range, indicating that inflation was not going out of control. This is extremely useful data for monetary authorities that have the crucial, sensitive task of raising interest rates in order to control inflation.

The PSA really is to blame. Its report (See image) was presented in a way that BBM’s attention could only but be drawn to the 4.4 percent “year-to-date” inflation figure rather than to the 6.1 percent June year-on-year inflation rate.

Whichever measure is used though, we do have by far the highest inflation in the region, which emphasizes the huge challenge facing BBM. Projections though, indicate that this year, factors pushing up inflation will be catching up with our neighbors, with our rate going down from 3.9 percent to 3.3 percent while those of our neighbors will be increasing.

Afghanistan’s fall, a harbinger of US empire’s decline?

Boracay: A watershed test case for the Republic’s rule of law