And he’s Budget Secretary Florencio Abad, coming across the other day an angry bunch of UP students who threw crumpled paper balls and even placards at him as they shouted “thief!”

The students’ ire was not undeserved. We have had corrupt officials, elected or appointed, who stole money from the nation’s wealth for their personal benefit, but the worst would be one who had helped corrupt the very foundations of a nation.

Some could argue that secretaries Mar Roxas and Emilio Abaya – the two officials responsible for the MRT mess – or agriculture head Proceso Alcala and police chief Alan Purisima, are President Aquino’s worst officials.

But I vote for Abad as the country’s worst ever as he has played a crucial role in damaging severely our system of government through the Disbursement Acceleration Plan (DAP), which he invented and implemented.

I found surprising though – at least at first blush – a Facebook post by Antonio La Vina yesterday: “One of my former students reposted the article on Sec. Abad being mobbed at UP with this comment. I agree fully with him: ‘Only time will speak up on this: Sec Abad has done more for this country than any activist can do or imagine.’”

Well, the praise isn’t really unexpected as La Vina is the dean of the Ateneo School of Government, a position he had assumed after Abad’s wife left that post to run as representative of Batanes. My alma mater, after all, has been inexplicably one of the remaining bastions of yellow thinking.

But I was shocked – and angry – at La Vina’s claim that “Abad has done more for the country than any activist can do or imagine. ”

The truth is the opposite: Abad has played a huge role in thrashing the institutions of this nation more than any other official has done in our history, with the exception, obviously, of Marcos who replaced the Republic with his one-man dictatorship.

However, Aquino has proven to be totally lacking in smarts to be capable of plotting out such a diabolical scheme as the Disbursement Acceleration Plan.

It is Abad who designed and implemented this evil DAP scheme that has channeled huge amounts of taxpayers’ money into politicians’ pockets. No other democratic administration has ever implemented such a subterfuge before.

If the Supreme Court had not ruled it illegal, Abad would have carried on, especially in order to raise funds for the 2016 elections for their gang to stay in power. 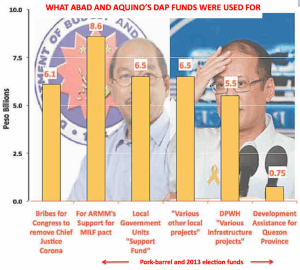 If he really believes in Abad’s integrity, I dare Mr. La Vina to defend in his newspaper column the DAP, Abad’s scheme for Aquino to control both Congress and the Supreme court for their own agendas.

I have written several articles on the DAP, and neither Abad nor Malacanang spokesmen had questioned the points I raised against these scheme, and my exposes on it.

The DAP had been kept secret (except for a minor press release in 2011 which a clueless budget department bureaucrat posted on the department’s website) until Senator Jinggoy Estrada revealed its existence, and his knowledge as to its function: To bribe the Senate to convict Chief Justice Renato Corona.

Abad devised the DAP since the ordinary pork barrel (Priority Development Assistance Fund) was insufficient to bribe Congress for an extraordinary project, which was for the Executive and the Legislative branches of the Republic to conspire to decapitate the Supreme Court.

The following are facts I have reported before and have not been disputed:

Abad released P19 billion pork-barrel funds for Congress days before or just after its vote to impeach Corona, while he released P2 billion, from P225 million to P85 million for each of the senators’ pet projects mostly during and right before their vote removing Corona. (And Corona was guilty of what? His failure to disclose his dollar accounts, the legal penalty for which was just to have him revise his SALN and report it again.)

But Abad needed more money to bribe the senators —especially those not with Aquino’s camp, such as senators Juan Ponce Enrile, Jinggoy Estrada, and Ramon Revilla Jr. —for the unprecedented deed of removing a chief justice on flimsy ground.

It was through the DAP that Aquino and Abad raised an additional P6 billion to bribe the Senate to take out Corona. The documents Abad has been required by Congress to release the other day provide more evidence for this.

Morally depraved
How morally depraved can one be to bribe members of Congress so it would cooperate to attack a pillar of our republican system and a bastion of the justice system, the Supreme Court?

How morally depraved can one be to subvert the constitutional provision that it is the Congress that allocates the use of taxpayers’ money, and not the Executive branch, which is what the DAP did by juggling the budget on the flimsiest ground?

How morally depraved can one be to corrupt our democratic system by creating the DAP which raised P14 billion in funds for Aquino’s campaign kitty in the 2013 elections? (See “Aquino and Abad used DAP funds for 2013 elections,” July 28, 2014)

How morally depraved in the most petty instance can one be to have allocated P140 million in pork barrel funds to one’s home province Batanes, with a 17,000 population and another P133 million in DAP funds, the same magnitude of funds given to provinces with 100,000 residents and more?

How morally depraved can one be to have refused to provide the Commission on Audit DBM documents involving pork-barrel disbursements of politicians who are with Aquino’s camp, so that only opposition senators have been jailed for alleged theft of government money?

Worse, like his boss, Abad has a talent for cloaking his nefarious schemes with noble nomenclature, as in the case of the DAP, which he claimed would accelerate the use of government funds, but which actually rechanneled funds as bribes for Congress and to boost his party’s 2013 election kitty.

Since the pork-barrel system was declared unconstitutional by the Supreme Court, Abad renamed it, first as “Bottom Up Budgeting,” and then as Grassroots Participatory Budgeting for Priority Poverty-Reduction Projects. Abad didn’t even bother to reduce the amount from those under the old Priority Development Assistance Funds, so it reached P20 billion in 2014 and P21 billion as proposed for next year.

And of course, he didn’t forget to allocate P75 million from the new pork barrel for his and his wife’s fiefdom, Batanes.

Use ‘BBL’ and CCT funds to defend our Kalayaan sovereignty