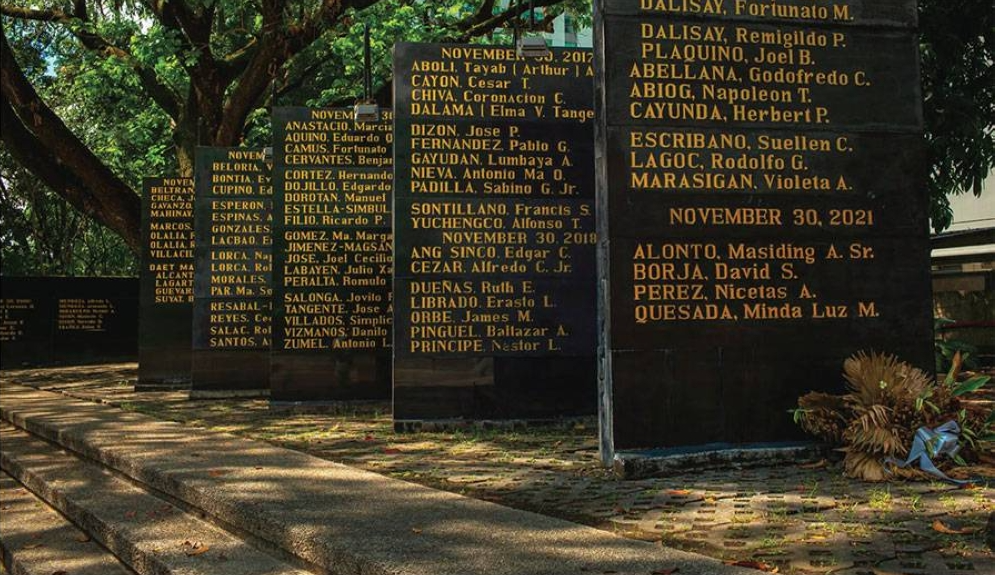 YES, the “venerable” New York Times spread those lies in a recent article, so nauseatingly biased against the Marcoses, in order to portray that martial law was so hateful that Ferdinand “Bongbong” Marcos Jr.’s (BBM) impending victory in the presidential race is merely due to Filipinos’ gullibility to social media disinformation.

A photo accompanying the article showed a portion of the “Bantayog ng mga Bayani Memorial,” which has names of deceased personalities, who struggled against the martial law regime. Actually, at least half of these are Communist Party political officers and New People’s Army fighters as well as Yellow anti-Marcos activists. This was because it was a project financed by the Cory Aquino regime, the Lopez oligarch and CPP activists.

The caption on the NYT photo claimed that the names shown etched on the walls were of those “who died during the Marcos regime,” implying that they were killed by Marcos’ military.

Included on the list in the NYT photo are the following who, however, died much later, even decades after martial law:

— Letty Jimenez-Magsanoc: The fiercely anti-Marcos editor of the Philippine Daily Inquirer (PDI) for most of the post-martial law years. Letty died in 2015, reportedly from a heart attack.

— Alfonso Yuchengco: The banking and insurance tycoon, whose finance empire flourished during martial law. “Don Alfonso” died in2016. The Bantayog claimed he provided “material” support to the “Light a Fire Movement,” really a terrorist group, which exploded a bomb in a posh hotel, during martial law. He was elected to that entity’s board of trustees, and I presume he gave it a substantial financial donation.

— Jovito Salonga: A well-known anti-Marcos opposition leader and key figure in the Corazon Aquino government, first as head of the Presidential Commission on Good Government and then Senate president. He died at 95 years old in 2016.

— Horacio (“Boy”) Morales: He was a ranking leader of the CPP’s National Democratic Front, but after release from prison turned to NGO work, and became a Cabinet member in the Joseph Estrada administration in 2008. He died in 2012 after collapsing from a heart attack while playing golf.

— Benjamin Cervantes. The renowned theater director, a regular in anti-Marcos demonstrations, died in 2013 from diabetes.

— Crispin Beltran. Yes, he was a leftist labor leader, but he died not during martial but in 2008, at 75 years old, when he fell while he was doing repairs on his roof.

— Rolando (“Ka Lando”) Olalia: The renowned leftist labor leader. He was abducted and brutally killed in November 1986, with the Bantayog claiming it was the military mutineers group, the Reformed the Armed Forces Movement (RAM), that killed him in order to terrorize the Left, which Cory had drawn close to. My sources though claim he was killed by agents of land developers in Cavite, for lawyering for small landowners there.

It is not at all surprising though that the NYT didn’t bother to fact-check what’s claimed through its photo, that these people were killed during martial law.

The NYT has demonstrated its unabashed bias toward figures the Yellows (the core of which has been the Aquino, Lopez, Osmeña and Roxas oligarchs) have tagged as their enemies: first and foremost, Ferdinand Marcos, then Gloria Macapagal Arroyo (after the Yellow wing of her administration, aka “Hyatt 10,” broke away in 2005), Rodrigo Duterte and now Ferdinand “Bongbong” Marcos Jr.

It is not, of course, because the NYT does the Yellows’ bidding. But rather the NYT has been an instrument of US foreign policy, which coincides with the Yellows’ views. Experienced journalists — and most of the European press — know that while overall it does excellent journalism, the NYT is at the vanguard of the propaganda to advance US foreign policy.

It was the US’ main propaganda vehicle in spreading the Bush administration’s lie that Saddam Hussein had weapons of mass destruction so that the US had a moral duty to invade Iraq.

Of course, it did issue an apology a year later, “that it [went] totally wrong” on Iraq — after half a million Iraqi soldiers and civilians had been killed, not to mention another million as a result of the internecine wars resulting from that American occupation of Iraq.

The NYT piece, in which it purveyed the obvious “fake news” that personalities like a renowned editor and a business tycoon were killed during martial law, was so biased against BBM that any objective journalist would puke over it. This is clearly shown in other assertions it made, all the usual Yellow (now Pink) narrative:

“False narratives online reimagine his father’s regime as a “golden era” in the nation’s history,” the article declares. But it doesn’t explain why these narratives are false. In contrast, I have explained in detail in my newspaper column (and not just “online”) that while the global debt crisis, combined with the political crisis due to the Aquino assassination, pushed the country into recession, the economy boomed in the first eight years of martial law, that calling it a “golden age” isn’t really an exaggeration.

“The family still owes $3.9 billion in real estate taxes.” This allegation has been so debunked that retired justice Antonio Carpio, who concocted this lie first in November last year, and invented the $3.9-billion figure, has totally shut up not just on this issue but on any other issue, even stopping his PDI column.

Where are NYT’s fact-checkers which, it has been boasting, had the biggest group of researchers numbering about 50, and supervised by two editors?

The NYT article is so biased against BBM that it doesn’t even notice it is being fooled by those it quotes. For instance, it reported: “In recent weeks, the opposition has been working furiously to counter the false narratives online about the Marcoses. Sergio Osmeña 3rd said he had hired 10,000 volunteers to wage a counteroffensive against the Marcos campaign. Hired volunteers?

And who does the NYT piece quote other than Osmeña, and twice? Rappler’s Maria Ressa, of course, who seems to have dedicated her life to putting this country down.

The NYT article is another of the many indications that the US government is rooting for Robredo and demonizing the Marcoses. This election boils down to electing a US puppet as president — an ideal one as she has demonstrated an alarming dearth of intellectual capacity — or an independent, whose father had been toppled by the most Machiavellian moves by the US in 1986.

ABS-CBN’s head honcho Gabby Lopez is a US citizen